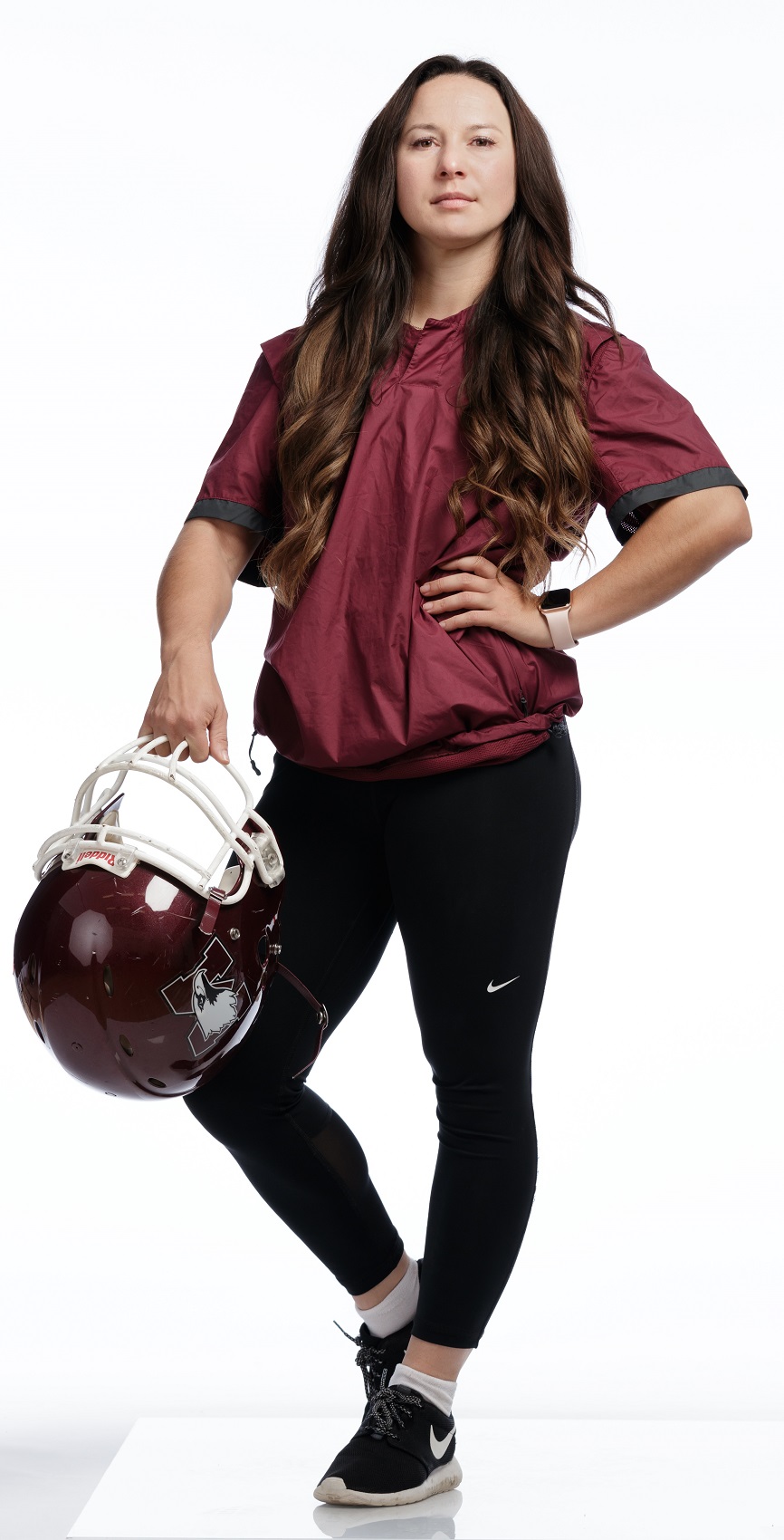 You might say that Amanda Ruller BKin’12 is a good sport. More accurately, you could say she’s good at sports. Ruller started competing in high-level sports at age six and never looked back. She was a record-breaking member of the U of R Cougars track and field team for five years. Her sprinting earned her spots in the Canadian Olympic trails in the 100- and 200-metre races and an invitation from the Canadian Olympic bobsled and skeleton teams to compete in the Canadian winter sports program. She also competed at a high level in soccer, basketball, softball and weightlifting. Ruller played for Los Angeles and Atlanta in the Legends Football League for five years and was a running back for the silver-medal winning Team Canada football team at the 2017 Women’s World Championships. After terms as a coach with the U of R Rams, she was hired by the McMaster University Marauders to serve as running back coach and strength and conditioning coach. She’s also a prominent social media influencer with nearly 100,000 Instagram followers (@amandaruller).

To what extent has your U of R degree helped you on your career path?
My degree has helped me work with high-level athletes in sport. It gave me a base to be able to confidently coach strength and conditioning as well as football.
What has motivated you over the years in your sporting career?
My biggest motivation is my father. He was my biggest fan throughout my sporting career. He passed away from brain cancer. So every day, I wake up knowing that I want to live for him. That makes me push as hard as I do.
How did you first get involved in football?
I drove to Los Angeles for an open tryout for the Temptation. I was told I was too small to play and I wouldn’t make the team. I showed up at the practices anyway until I was able to practice. Then I worked my way to a starting position.
What do you consider the highlight of your athletic career so far?
Being invited by Tom Brady’s agent to coach at an NFL free agency camp. He asked me to work with the running backs and defensive backs and to run the strength and conditioning programs.
What was it like to win a car on The Price Is Right?
It was very exciting. The odds of that happening to someone are very slim and I did it. It was exciting to be on the show and to go through the emotions of winning a car and meeting Drew Carey. That’s a memory I’ll keep for the rest of my life.
What’s next for Amanda Ruller?
I promise, I’ll be the first female positional coach in the CFL.
What’s your ultimate dream job?
My dream job is to be a running back coach in the CFL and beyond that, I want to be an offensive coordinator in the NFL.
What words of advice would you give to aspiring athletes?
Don’t let the opinions of others get you down. Go after what you want. And don’t apologize for being great.

Latoya, a registered social worker, is a community activist and leader who has focused her advocacy around one of today’s most important issues – anti-racism. During the Black Lives Matter movement, Latoya’s outspoken comments gained her media attention and provided a platform for her to speak on the issue to, among other groups, University of […]

On the day Chris Lane was to receive his degree from the University of Regina – which, coincidentally, was also his 22nd birthday – he boarded a plane bound for London, England. Lane had received a prestigious scholarship that offered him international experience in journalism, and he was determined to make the most of the […]