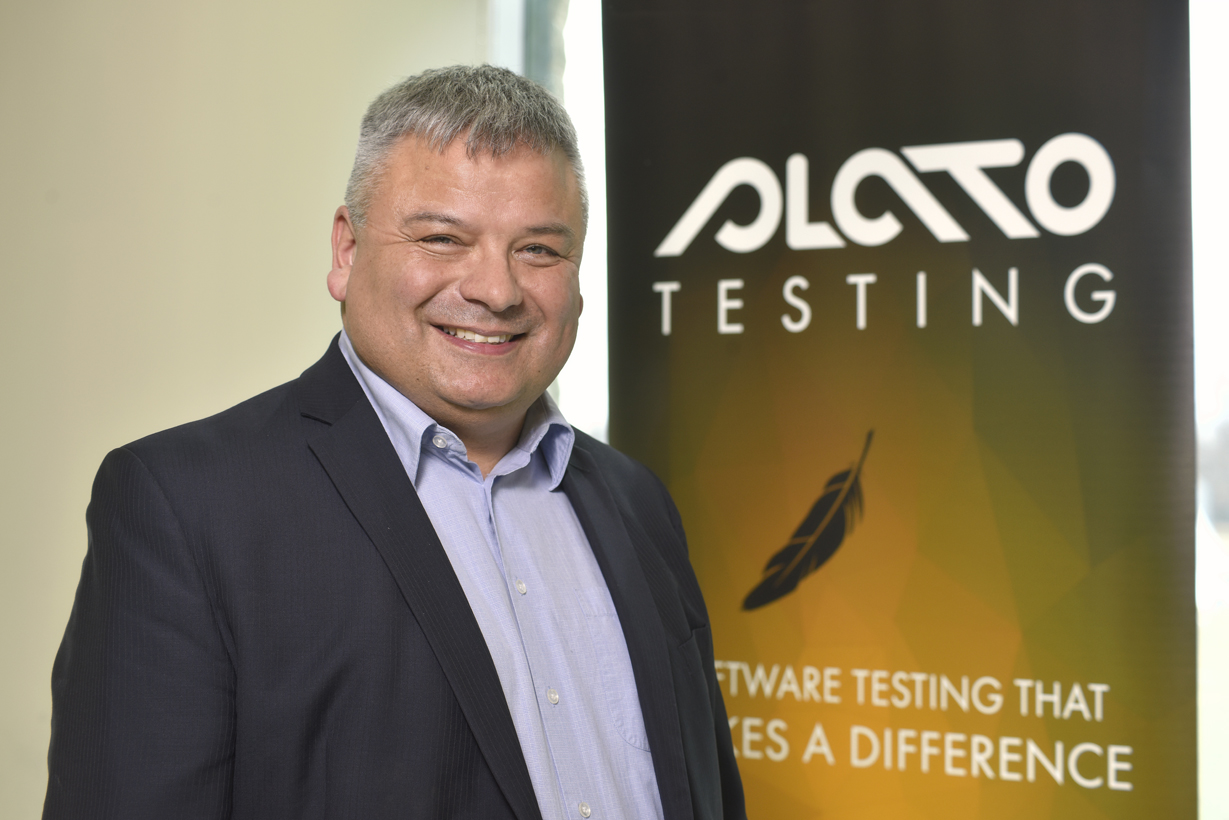 Taking a cue from the Truth and Reconciliation Commission‘s Calls to Action, a graduate of First Nations University of Canada is leading a firm that is building capacity for employment of Indigenous Canadians in Saskatchewan and across the country.

It’s been 26 years since Denis Carignan BA'93 walked across the stage to receive his Bachelor of English Literature from the Saskatchewan Federated Indian College (now First Nations University of Canada) at the University of Regina.

The goal of the company is to create and leverage a pool of 1,000 Indigenous software testers across Canada by 2022.

He is the first to admit being president of a company was not something he would have predicted back then, but that’s exactly what happened.

Sitting in a coffee shop armed with a laptop and a smartphone he has everything he needs to start his day as president of PLATO Testing – a software testing company. Established in 2015 in New Brunswick, it employs 60 Indigenous testers and has offices on or near Indigenous communities in Fredericton, Miramichi, Sault Ste. Marie, Toronto, Calgary, Edmonton, Vancouver and most recently Regina.

The goal of the company is to create and leverage a pool of 1,000 Indigenous software testers across Canada by 2022. Carignan joined PLATO Testing as its president in September 2016, but his connection to the company began long before then.

It is a tale of being the right person in the right place at the right time. He readily shares his story of how he became the leader of a cutting-edge IT company with anyone who asks. In fact, PLATO Testing serves as a concrete example of what true reconciliation can be.

Carignan, a member of Pasqua First Nation near Fort Qu’Appelle, believes his education and work experience helped lay the foundation for him to transition into the role he enjoys today. Shortly after receiving his first degree in 1993, he landed a job with what is now known as Indigenous and Northern Affairs Canada (INAC). As a requirement of his job, he returned to the University of Regina where he received a degree in French.

“It was one of my lifetime goals to learn another language,” says Carignan, who was happy that he was able to learn French without leaving Regina.

He married, had children and worked at INAC for more than two decades. Things likely would have remained status quo had it not been for some changes within his department that required him to move from the Prairies to the Maritimes.

He says the decision to create an IT company that employs Indigenous people seemed viable based on some simple statistics. McIntosh says there are currently 190,000 IT jobs in Canada that need to be filled and, at the same time, there are pools of untapped labour available on any First Nation.

In 2015, while he was living in New Brunswick, he applied to be part of the Governor General’s Canadian Leadership Conference (GGCLC). The conference brings together 250 emerging leaders from across Canada to participate in the two-week program. Attendees come from the private sector, government, unions and non-profit organizations and are divided into 16 study groups and sent to a specific region within the country.

At the end of the two weeks, each group presents a report to the Governor General.

Carignan’s group was sent to south eastern Quebec, which included Montreal and a number of eastern townships.

What made this event different from others was the timing.

“The conference took place just prior to the Truth and Reconciliation Commission’s (TRC) final report,” says Carignan. “During our study group tour there were a number releases coming out related to it."

Having spent the majority of his career working on the Indigenous file for the federal government and also being an Indigenous, he began fielding a lot of questions about the TRC report and the 94 Calls to Action.

Keith McIntosh, founder of PLATO Testing and president and CEO of PQA Testing, one of Canada's leading independent IT testing firms.

Among the group asking questions was Keith McIntosh, president and CEO of PQA Testing, one of Canada’s leading independent IT testing firms located in Fredericton, New Brunswick.

“It was June 8, 2015, Keith and I had a conversation just about what could be done to make a difference to create sustainable employment for Indigenous Canadians,” recalls Carignan.

McIntosh wanted to know if there were programs within government that could help train people to pursue careers in the knowledge economy such as IT. Little did Carignan realize, how significant that conversation would be, not only in his life, but in the lives of Indigenous people across Canada. The seeds for PLATO Testing were planted during that conversation.

Like Carignan, McIntosh can recollect details of the conversation almost verbatim. What motivated McIntosh to start PLATO was his desire to make a difference. He says the decision to create an IT company that employs Indigenous people seemed viable based on some simple statistics. McIntosh says there are currently 190,000 IT jobs in Canada that need to be filled and, at the same time, there are pools of untapped labour available on any First Nation.

Such a business is sustainable because the only thing a person needs to become a software tester is training and a strong Wi-Fi signal.

McIntosh recalls how during the GGCLC, his study group, which included Carignan, visited Montreal.

"We had dinner on fine china and drank out of coffee cups that were so fine that you could see the person sitting opposite of you," he says.

The next day the group visited a K-6 school located on the Kahnawke First Nation.

"It wasn't a mainline school, but they were teaching the children the Mohawk language," says McIntosh. "The little kids came running out to see all these important people and as the doors of the school opened, you could smell the water. It was a bad water smell."

He couldn't believe the stark contrast in basic living conditions that existed in Canada.

“From the schoolyard you could see the skyline of one of the most beautiful cities in North America and the water in this K-6 school was not drinkable," says McIntosh. "That was not right. That was embarrassing."

It is a realization that has stuck with him.

“I see us developing individuals in IT and I see these Indigenous professionals becoming very highly qualified developers. We are looking at growing our business in the tech sector,” he adds.

When the TRC released its 94 Calls to Action, McIntosh looked at what he could do in terms of reconciliation. He found his answer.

Although McIntosh knew what he could do, he needed a bridge between his company and First Nations – that’s where Carignan came in.

McIntosh laid out his idea of creating a network of Indigenous software testers across Canada that could compete for lucrative contracts from any company in the world, while never having to leave their home communities.

Carignan knows the realities many face while living on-reserve and trying to earn income. Jobs are almost non-existent on most First Nations and many have to leave their own communities to find work or to pursue education or training opportunities. If jobs come to reserves, the spinoffs are immeasurable.

A smile immediately comes to Carignan’s face when he recalls the last words he spoke to McIntosh after their conversation about building a business that will not only train, but employ 1,000 Indigenous software testers.

(left to right) Keith McIntosh, Denis Carignan and Thomas Benjoe on the occasion of the April 2 launch of PLATO Sask Testing.

“I said you build it and I will come work for you,” he says with a laugh.

Three months after he uttered those words, McIntosh called him and asked when he was going to come work for him. Carignan, accustomed to moving at the pace of government, underestimated the speed at which McIntosh moved. When he received the call he had to make a serious decision to move from something stable to something with no guarantees. Although he knew he wanted to be part of what McIntosh was building, he had his family’s future to consider.

After some juggling, he said goodbye to his 9-to-5 routine, his office space and coworkers. Carignan says changing jobs has invigorated him and although he admits much of his work has been conducted in coffee shops and his meetings are conducted via Skype, email or phone, it’s been worth it.

“Sometimes it was like, ‘I have to go to work,’ and you drag yourself to work,” says Carignan. “Now, I’m excited about the day.”

Witnessing first-hand the impact PLATO has had on individuals and communities has been extremely rewarding. Carignan says it’s great to see Indigenous testers being a positive influence in their communities, in their work placements, and within their own families.

When Carignan moved back to Saskatchewan he immediately went to work at expanding PLATO in Saskatchewan. Once again he relied on his knowledge about Indigenous governments and securing training dollars.

Being a member of Pasqua First Nation, he approached the File Hills Qu’Appelle Tribal Council (FHQTC) to talk about a potential partnership. He says FHQ Developments already had a proven track record when it came to business and, although it has a diverse portfolio, it did not possess any IT businesses.

Carignan set up a meeting with the president of FHQ Developments Thomas Benjoe CA’09, CHTGEM’09, DAdmin’09, BBA’11 (FNUniv). Benjoe says each year his company reviews an average of 25 business proposals. It took a few follow-up meetings with Carignan and McIntosh before the ball started rolling on the new partnership between PQA Testing and FHQ Developments to create PLATO Sask Testing.

“I really want us to be seen as leaders, leading in economic development and being able to lead in new sectors and establish new ways of doing business,” says Benjoe. “It is something we have really been focused on in our strategies and to be the first with a tech company in the province is really important for us because we know the potential it’s going to create.”

Benjoe says Carignan’s determination and his passion for PLATO are what piqued his interest in the IT company.

“When we create these new companies we have to make sure their values are aligning to our values,” he says.

On a personal level, Benjoe says it’s been great to work with Carignan. (Carignan’s home First Nation is one of 11 member nations of FHQTC.) Both are FNUniv alumnus, which is also a plus.

“It showcases the University and its ability to develop strong talent,” says Benjoe.

He says it’s great to work with other alumni on a common goal and that he is eager to create a better future, not only for Indigenous people, but for all of Saskatchewan.

“I see us developing individuals in IT and I see these Indigenous professionals becoming very highly qualified developers. We are looking at growing our business in the tech sector,” he adds.

Carignan says changing his career path was daunting, but when he realized McIntosh was willing to create a company that could potentially compete with organizations from around the world, he knew it was worth the sacrifice. He adds that someday when his children look back on his career they will know their dad did something good because it was the right thing to do.

Educating leaders in the non-profit sectors

A recently introduced certificate program, delivered by Luther College and the University of Regina’s Centre for Continuing Education, is building important leadership capacity in Saskatchewan’s volunteer and non-profit sectors.