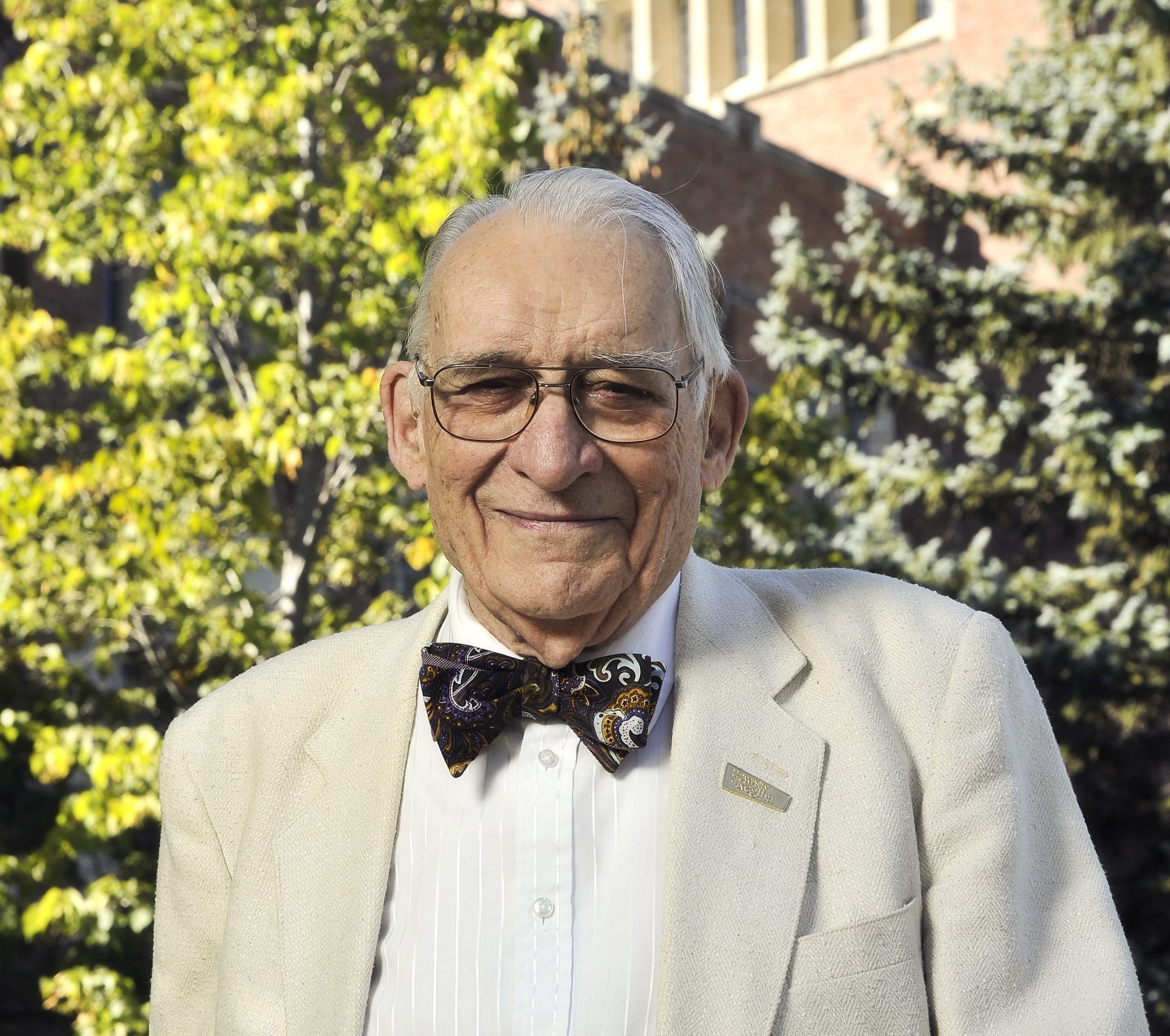 I first met Jack when I was a young teenager. As a speed swimmer from Saskatoon competing against his son Dave, I was billeted at the Boan household. It was there that I first learned about the life of a professor. In 1974, I moved with my parents to Regina. After a year of work and travel, I began studying history at the newly independent University of Regina. Since Jack was the only person I knew, I took a stroll over to his office the first week of school. He took me under his wing and gave me the guidance that would change my life.

“Since Jack was the only person I knew, I took a stroll over to his office the first week of school. He took me under his wing and gave me the guidance that would change my life.”

Under Jack’s tutelage, I joined the tiny campus chapter of the World University Service of Canada (WUSC). As the chair, Jack arranged WUSC lectures and other events where we could learn about the challenges facing developing countries. In one of our first WUSC roundtable sessions, Jack asked me whether I thought everyone in the world should have the same rights, irrespective of nationality. I gave him the standard answer: rights are conferred by states and states decide who is or who is not a citizen. Gently agreeing that this was currently the case, Jack asked me if I could imagine a future world in which all human beings would have full and equal rights as global citizens. What seemed to be a highly utopian and far-off idea at the time eventually wormed its way into me. Gradually, I began to appreciate the liberating potential of Jack’s vision for the future.

In that first year at WUSC, Jack asked me to put my name forward as the University’s student candidate to attend a month-long working seminar in Guyana. I did and, to my great surprise, I was selected by the national office. Jack immediately rolled up his sleeves and helped to raise the necessary funds. He paraded me into various professors’ offices and then, after explaining the purpose of the WUSC seminar, shamelessly asked them for sizeable contributions. With me standing in front of them and Jack laughing off the request, they coughed up the money.

My learning experience that summer changed my life. Jack knew it would, as it had for every student he helped attend a WUSC seminar. I began to see the importance of understanding economics, and I added the subject as a second major for my undergraduate degree program. At that point, I also decided that I would use my studies in university – first history and economics, later law – to build a career in public policy. Indeed, I ended up specializing in health policy, the same area that Jack devoted much of his life.

Years later, after doing my PhD in the United Kingdom and working as a young professor in the United States, I moved back to Regina to work as a deputy minister in the Saskatchewan government. I reconnected with Jack.

When I later became the executive director of the Royal Commission on the Future of Health Care in Canada – the Romanow Commission – I called upon Jack to talk to my staff about his experience decades before as a researcher on the Royal Commission on Health Services – the Hall Commission – from 1961 until 1964. I hung on his every word as he talked us through the trials and tribulations of the Hall Commission and pointed out the less well-known recommendations and the impact they could have had if only they had been implemented. He quoted with great pride the opening lines to the Hall Commission’s Health Charter for Canadians (a line which I suspect that Jack himself drafted): “We recommend a course of action based upon social principles and the cooperation and participation of society as a whole in order to achieve the best possible health care for all Canadians, an aim that Canadians by their individual efforts cannot achieve.”

What may not be as well known is that, from his base at the University of Regina, Jack worked assiduously to develop a community of health economists in Canada. Jack turned this network into an organization in 1983 (the same year he began his formal “retirement”) known as the Canadian Health Economics Research Association (CHERA). And then, 20 years later, he helped expand CHERA into the Canadian Association for Health Services and Policy Research (CAHSPR).

Jack also established the Justice Emmett Hall Memorial Foundation to raise money to foster health economics and policy research among undergraduate and graduate students. There was only one condition for potential submissions for the annual awards – students had to address at least one of the five principles of the Canada Health Act: public administration; comprehensiveness; portability; universality; and accessibility. I am very proud to say that, in 2015, these awards were renamed the Jack Boan Student Essay Competition to commemorate his role in facilitating student interest and research in the field.

In summary, Jack created a real and deep community of dedicated scholars. As he described the selection criteria for the individual selected annually for the Emmett Hall Memorial Lectureship, his was “an outstanding contribution to the health ideals held by Emmett Hall” and, I would add, Jack himself.

Greg Marchildon BA’80, MA’84
Ontario Research Chair in Health Policy and System Design with the Institute of Health Policy, Management and Evaluation at the University of Toronto

We remember recently lost U of R family members.

It’s been a sad few months for the University of Regina family. We have endured a string of passings of several people who had strong ties to the University. Jack Boan, professor emeritus of Economics, passed away on October 31, 2018 at the age of 100. Myrtle Surjik, the first woman member of the University of Regina Board of Governors, passed on December 16, 2018. On December 19, 2018, long-time Saskatoon StarPhoenix columnist and U of R journalism school graduate Cam Fuller passed away. Glen Nelson, a star of the men’s Cougars basketball teams of the 1980s, passed peacefully on January 29, 2019. On March 3, Dominic Gregorio, the much-loved choral director at the U of R, passed away. Internationally renowned visual artist Joe Fafard, a former instructor at the University, succumbed to cancer on March 19. On April 15, Noel Starblanket, a University of Regina Life Speaker and Elder-in-Residence, journeyed back to the Creator. Degrees reached out to seven individuals who knew these remarkable personalities best and asked them to share some memories with our readers.

Myrtle Surjik was born and raised in Regina. She attended Central Collegiate and later Balfour Technical School. After a brief career as a beauty queen (Miss Grey Cup, 1951),  model and flight attendant, Myrtle married David Surjik, and together they raised four children in Regina.

Possessed of boundless energy, Myrtle combined family life with a life of service and community involvement. Running for city council, supporting the Douglas government’s initiatives on universal health care, pushing for reproductive rights and gender equality – these topics piqued her interest and received her passionate support. When she decided to return to school to pursue a Bachelor of Social Work at the University of Saskatchewan (Regina Campus), she did so with commitment and determination. She graduated with distinction in 1977 and launched a new career, first as a social worker in the mental health field, and later as a professional with the Public Service Commission in human resources.

“Myrtle’s life was characterized by excellence in all she did. She was an anchor for her husband and children, a caring and wonderful friend, a passionate professional and advocate for the causes she believed in.”

This was a woman who was gifted with a razor-sharp intellect. Classmates and professors alike observed her analysis of each situation with her characteristic balance of the ideal and the practical. She was an accomplished debater and in class often took a contrarian position to inspire further discussion. The greatest fun was watching her debate gender equality in a women’s studies class. With her disarming style, and supported always by facts, statistics and logic, she took on all opponents with verve and a smile.

Beyond her academic pursuits and her career, Myrtle became well known for her community activism. She chose to serve in the areas that were deeply important to her, areas she felt were not receiving the attention they deserved. The issue of women’s participation at all levels in the workforce drove her to become involved in the Regina Council of Women. She became a leader in the Voice of Women organization. A firm believer in reproductive rights, she supported the Family Planning Association. Never losing her focus on the matter of gender equity, Myrtle became part of a group of women who made representation to the Royal Commission on the Status of Women in Canada in 1970.

As a member of the Board of Governors, she was appointed to the President’s Committee to Review the Status of Women at the University of Regina. A report from the University of Regina magazine stated that “she was concerned about the lack of women in the University administration at all levels.” She was so pleased when Dr. Vianne Timmons became the first woman president of her beloved alma mater.

Mental health was Myrtle’s other passion and in 1992, she received the Canada Health and Welfare Volunteer Award, recognizing her exemplary and valuable contribution towards improving the health and social well-being of Canadians. She was always completely open about her father’s experience with schizophrenia and in the late 1980s began to dedicate herself to raising public awareness of the disease both locally and nationally. She rose to increasingly influential roles within the Schizophrenia Society, working first as the Regina president, later the Saskatchewan president and then serving on the national board.

She immersed herself in advocacy work, lobbying all levels of government to increase services and enhance research. She was a very effective fundraiser and pushed for greater public education and counselling services for families of individuals suffering from mental health challenges. Her fundraising initiatives resulted in the establishment of scholarships in the areas of social work, educational psychology and clinical psychology – all focused on understanding the illness better and providing more appropriate services to those affected by the illness. In 1996, Myrtle was recognized by the University of Regina as a Distinguished Alumnus for her outstanding work with the Schizophrenia Society.

Myrtle’s life was characterized by excellence in all she did. She was an anchor for her husband and children, a caring and wonderful friend, a passionate professional and advocate for the causes she believed in. Everything she did, she did with kindness and empathy. She will be remembered as a woman of great beauty, both inner and outer, and a woman of great warmth.