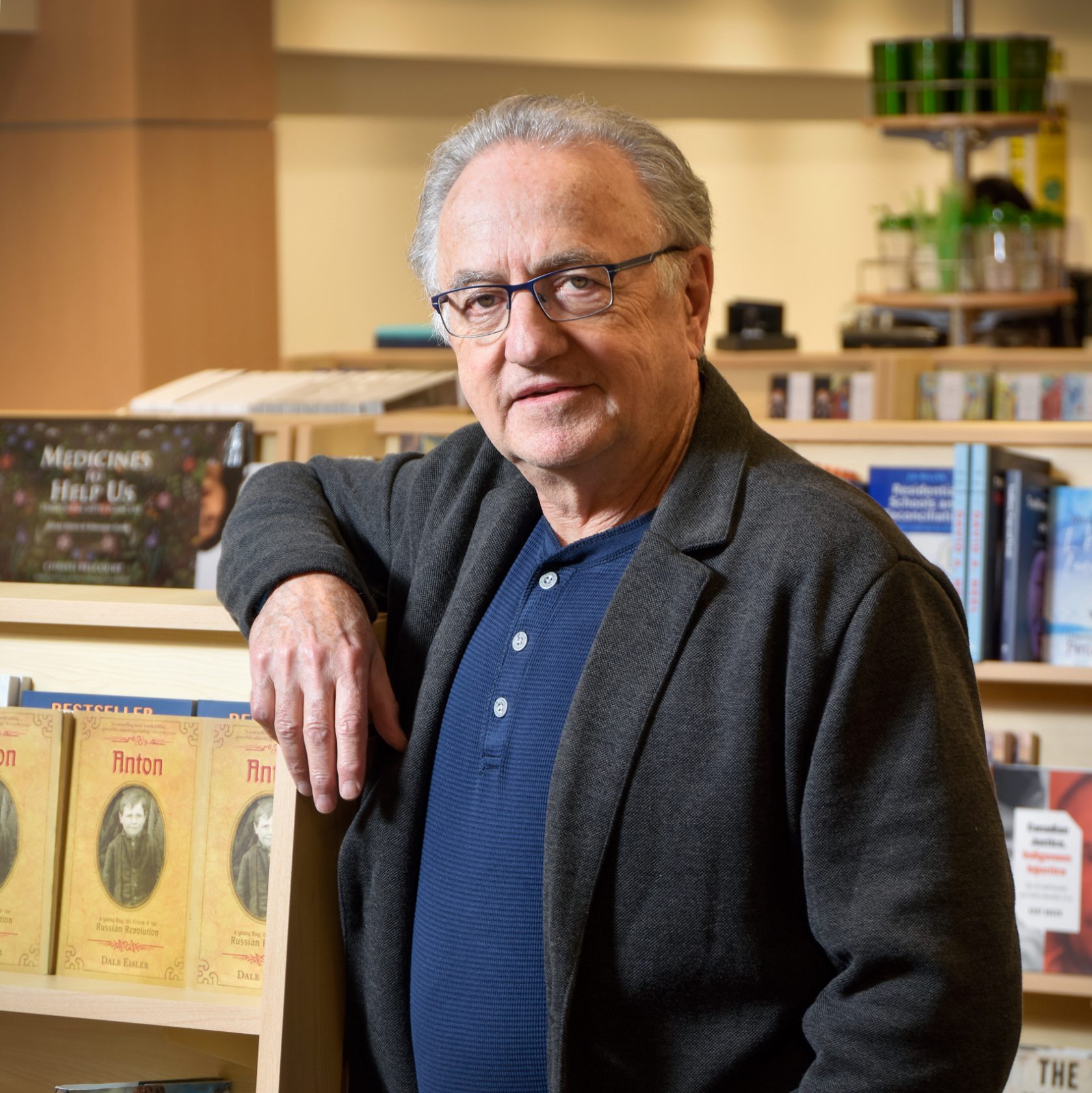 Usually Dale Eisler can be found serving as senior policy fellow at the Johnson Shoyama Graduate School of Public Policy or senior advisor on government relations to University President Vianne Timmons. These days, Eisler may be more likely meeting with Hollywood producers or having brunch with A-list movie stars. Eisler is now in the movie business. A book he wrote loosely based around an incident in his family history has made it to the silver screen.

Two young boys squeal with delight as they hurtle down a hill on a wooden cart. Later, they lie on their backs interpreting what they see in passing clouds, and pledge their everlasting friendship in their secret hideaway. These are scenes from the movie Anton, which was inspired by an incident in the family history of Regina author Dale Eisler BA’70. Another scene in the movie shows Anton’s father — Eisler’s grandfather — being murdered by a band of horse-mounted Bolsheviks during the turmoil that followed the Russian Revolution in 1917.

Eisler, who is a senior policy fellow at the Johnson Shoyama Graduate School of Public Policy and senior advisor on government relations to U of R president Vianne Timmons, had known about the incident since he was a boy. A history book in his childhood home contained a mention of the village in Ukraine where the family lived in 1919. A footnote at the bottom of a page listed the names of 12 men who were killed on that day, including Eisler’s grandfather. His grandmother and the family’s nine children witnessed the murder.

Eisler, who has written two books on Saskatchewan’s political history, decided to write the story as a book of historical fiction. Gathering additional information from family members proved to be difficult, however, because they would become very emotional. “My mother was only four years old,” Eisler says, “but she still had a vivid memoryof that moment when she saw her father murdered. She had great difficulty talking about her childhood.” 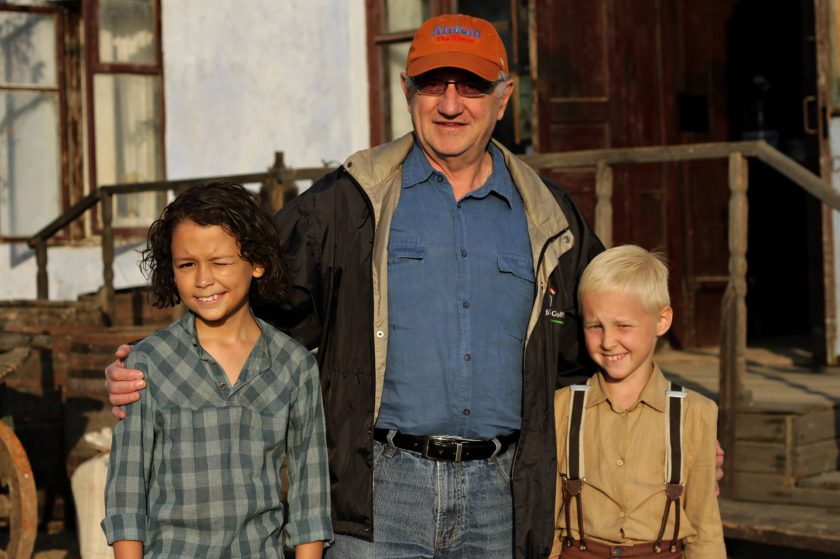 Dale Eisler with the young stars of Anton near Odessa, Ukraine where the film was shot. Mykyta Dziad (left) who plays Jacob and Nikita Shlanchak who plays Anton. Photo courtesy of Dale Eisler

Eisler turned to other sources, researching various books and documents on the Bolshevik Revolution and the Ukraine. He was living in the U.S. at the time, and joined the Germans From Russia Heritage Society, which had members all over the country doing genealogical research of that period. He also attended some of the Society’s conventions.

Drawing on these sources, Eisler wrote Anton: A Young Boy, His Friend and the Russian Revolution, which was published in 2010. The story focuses on the childhood experiences of Anton and Jacob, who create an imaginary world to shield themselves from the violence and hatred taking place around them. Although Anton is Catholic and Jacob is Jewish, the two forge a lifelong bond through their shared imaginations and exploration of spiritual questions. 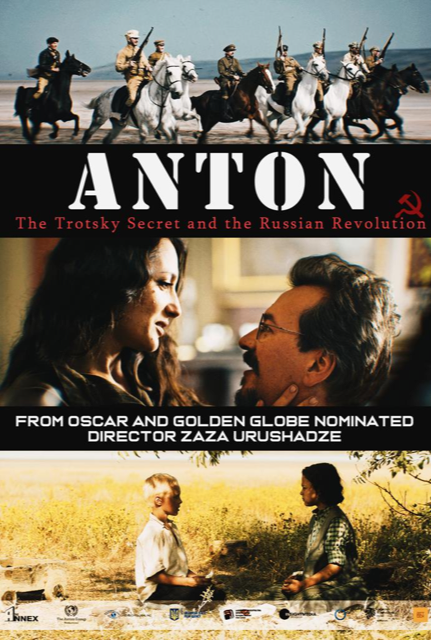 Depending on the film’s reception during its U.S. run, Anton could have screenings in Canada — including Saskatchewan — in 2020. Courtesy of Dale Eisler

“One of the things I wanted to do,” Eisler explains, “was to explore the universal experience of childhood friendships, because we all go through that. You go through life and have all sorts of acquaintances — people you know — but others are friends. What does that mean?”

Eisler’s answer was to show that the friendship between Anton and Jacob was greater than the forces of division swirling around them. Another theme he wanted to explore was the yearning for a new life, which he sees as being at the core of the Canadian and North American immigrant experience. This was the case for Eisler’s grandmother, who settled with some of her children in Saskatchewan in 1925. The book and the movie mirror this family history. Anton and Jacob are separated, but their friendship endures, influencing their lives until they reconnect decades later as Anton is dying. 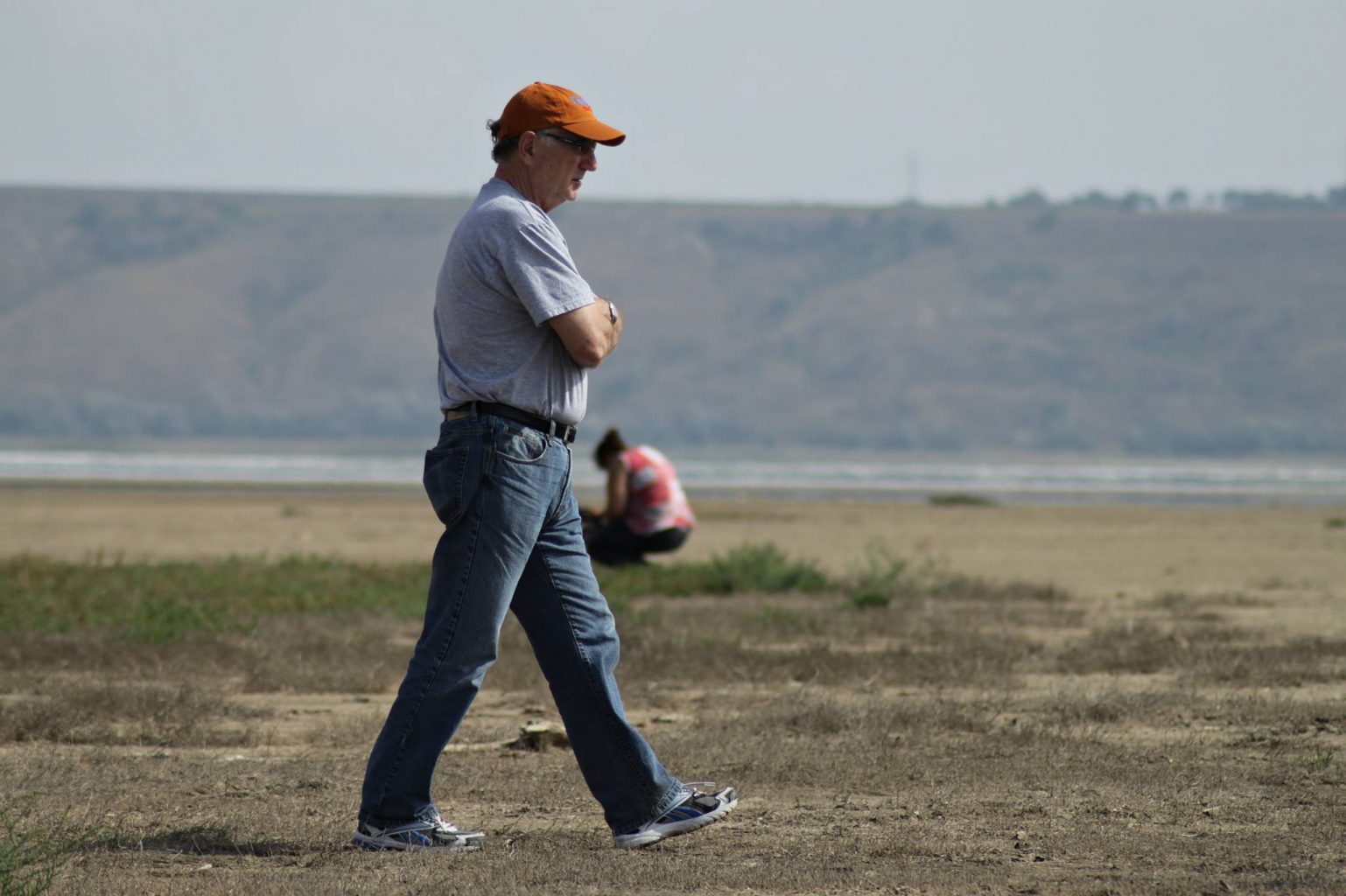 Eisler takes a walk while on the set of Anton near Odessa, Ukraine. Photo courtesy of Dale Eisler

Ironically, it was the desire for a new life that brought Eisler’s grandparents to Ukraine. During her reign as Empress of Russia, Catherine the Great had expanded the country’s borders to the Black Sea. She welcomed immigrants — particularly from Germany — to settle on the newly acquired rich agricultural land near Odessa. Her promises of land ownership, no military service, and low taxes, along with assurances that they could keep their own language, religion and culture, attracted many farmers and tradespeople from Germany. This included villages populated by German immigrants that began to flourish in Ukraine in the late 18th Century.

The success of these German colonies bred envy and resentment among Russia’s landless serfs, who became a powerful force as the Tsarist government collapsed. Coupled with rampant antisemitism and unease within the Orthodox Church over the growing Catholic presence in the country, the stage was set for an outburst of economic, ethnic and sectarian score-settling after the Russian Revolution in 1917.

Following its release, Eisler’s book received some good reviews and was “modestly well received.” A number of people told him the book would make a great movie. “I thought, yeah, well, that is a nice compliment,” Eisler recalls. “I appreciated it, but didn’t think more of it than that. I agree. It is a good story; a unique story, and a story that’s never really been told.”

When he’s not novel writing or screenwriting, Eisler serves as the University’s senior adviser (Government Relations) and is a senior policy fellow at the Johnson Shoyama Graduate School of Public Policy. 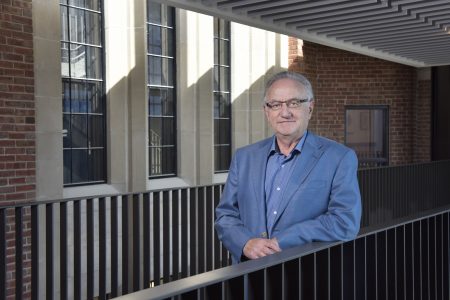 Eisler later decided he would write a script. He read a number of scripts and screenplays, and, writing on and off over a two-month period, completed his own. It was a different kind of writing process, he explains. While in a novel the story is primarily carried by the narration, in a screenplay the story moves forward through dialogue and the interaction of the characters.

The next step was to find a producer. Eisler, who was Canada’s Consul General in Denver, reached out to his counterpart in Los Angeles to help find a producer. He connected with Mirza Davitaia, who had worked in film and television production, and also served as a government minister in his home country, the Republic of Georgia, before establishing a production company in Los Angeles. Eisler sent him the script and the two met in Los Angeles. Davitaia very much liked the storyline and the concept.

“I saw it as a clash of two worlds,” says Davitaia. “The clash between the world of simple childhood and the brutal world of adults. The cave where Anton and Jacob meet is their small, childish, wonderful world, while the larger world outside is going through a transformation.” 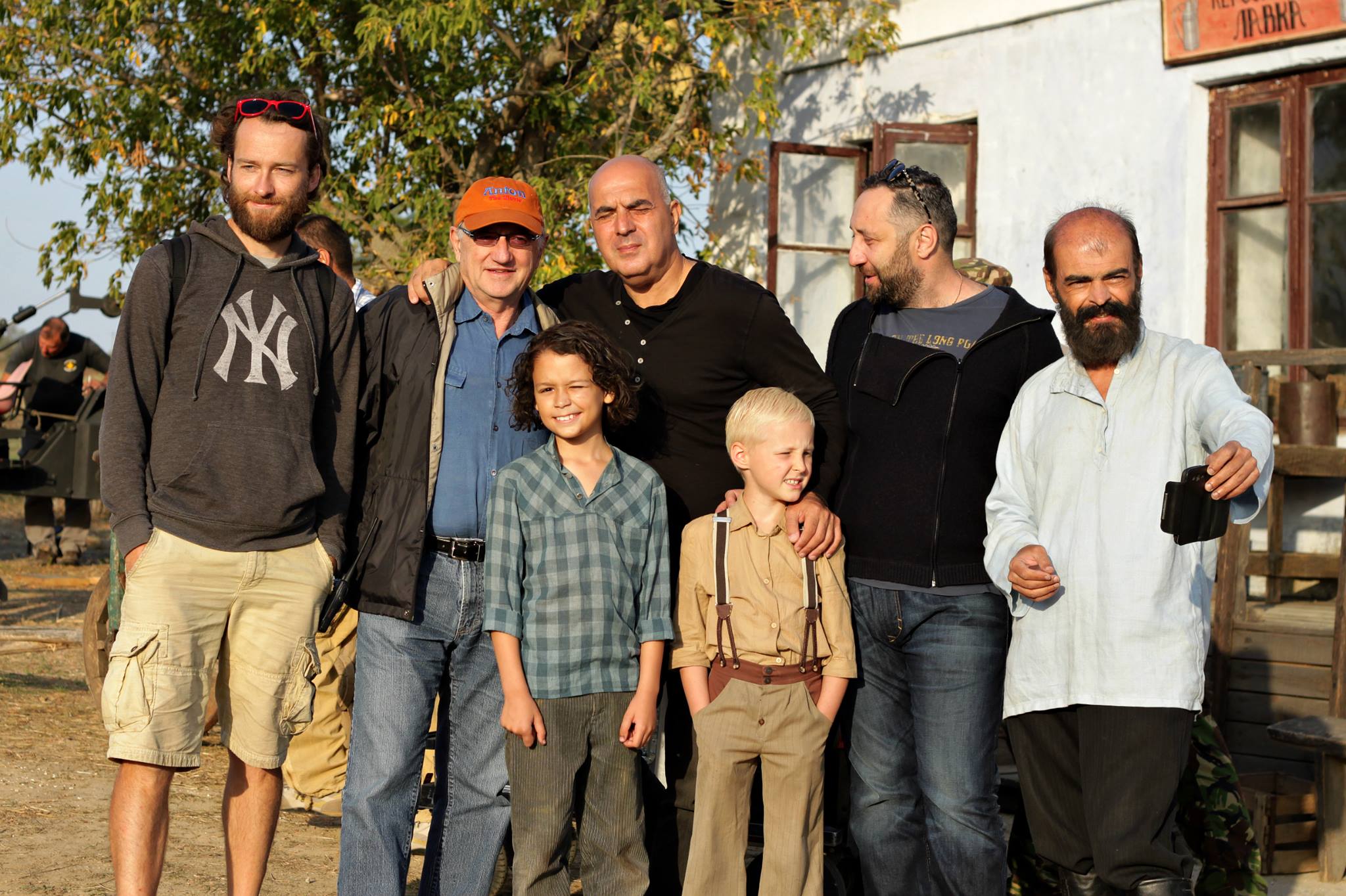 As the producer, Davitaia explains, it was his job to assemble everything around the idea. In the world of movie production, the most important step is to attract a director who is willing to take on the project. As in many other businesses, networking plays a major role in this process. Davitaia reached out to Zaza Urushadze, who was also from his hometown of Tbilisi, Georgia. Urushadze had recently had a film nominated for an Academy Award and a Golden Globe Award as best foreign-language film. They had talked in the past about several projects, Davitaia says, and Urushadze agreed this would be a good one to work on together.

Eisler on the set of Anton, near Odessa, Ukriane. Production took place over six weeks in a village not far from where the events of 1919 unfolded. Photo courtesy of Dale Eisler

“Having a director attached to a script — a director who is pretty well known, particularly in Europe — that gives you credibility,” Eisler explains. “It’s much tougher pitching a script in isolation. Having a producer who is interested is important, but having a director is the critical component.”

With Urushadze on board, Davitaia was able to arrange financing with government partners in Ukraine and Georgia to support the production. Finding bilingual actors was a challenge, since the film was shot using German and Russian dialogue, with English subtitles.

Production took place over six weeks in a village not far from where the events of 1919 unfolded. Eisler observed the production work for about a week, describing some of the scenery as breathtaking and praising the work of cinematographer Mikhail Petrenko. “He (Petrenko) has an eye for these sorts of things,” Eisler says.

"If Anton does draw audiences in the U.S. that could mean screenings in Canada — including Saskatchewan — in 2020."

Anton began screening in art cinemas in various cities in the United States in October. Davitaia explains that was the logical place to debut the movie. Even though movies with subtitles are limited in their commercial possibilities, there are American audiences that support movies as an art form. At the end of its U.S. run, the movie will screen for a week in Los Angeles, after which Davitaia has plans to enter it into competition for an Oscar, but not in the foreign-language category.

An Academy Award nomination would give the film instant credibility in the marketplace, Eisler says. “Having said that, given the hundreds of submissions in each category, realistically the odds of nomination are long indeed.”

Might Anton someday be screened in Saskatchewan? Speaking just as the film was to premiere in the United States, Eisler said that would depend on how it is received there. If Anton does draw audiences in the U.S., that could mean screenings in Canada — including Saskatchewan — in 2020.

Bill Armstrong is a Regina freelance writer and amateur photographer with a strong interest in Saskatchewan history.

You can find the movie trailer here. Anton: A Young Boy, His Friend and the Russian Revolution can be purchased on Amazon.ca or at fine books stores near you.

Danielle Major is one of those rare and gifted all-around students who defied the odds from an early age. She is an exceptional academic all-star athlete, and student coach. In short, she excels in, well, everything.

In 2016, brothers Warren and Jeff Dudar BA’02, MA’09 established one of the most unique, popular and nasty trail runs in Canada. The Beaver Flat 50 drew 600 runners in September 2019, the highest number of runners in its four-year history.