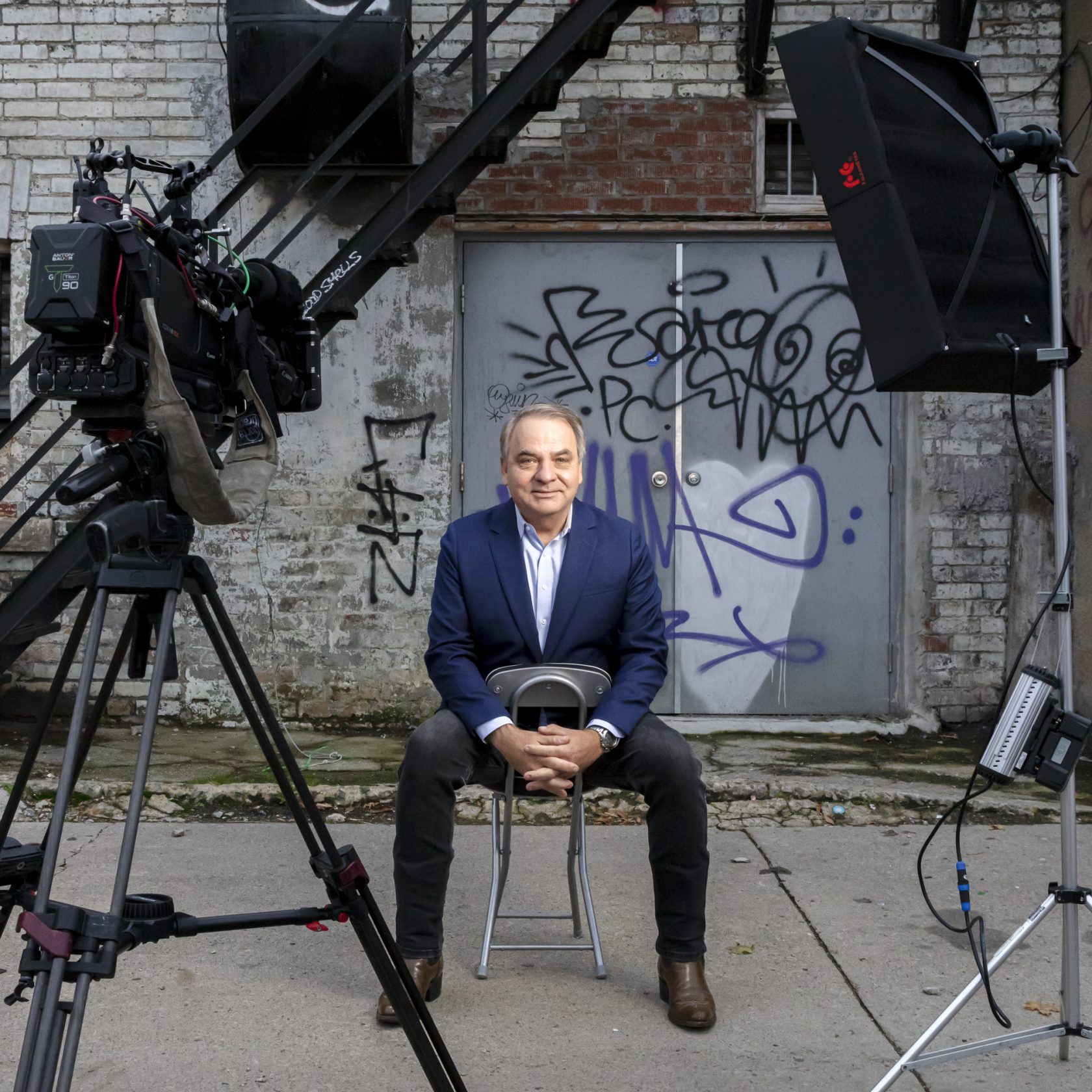 Reflections on 40 years of journalism

Sean O’Shea BA’84, a graduate  of the University of Regina School of Journalism, is an award-winning investigative and consumer reporter for Global News in Toronto. O’Shea  has spent four decades working tirelessly to tell stories that matter  to viewers; he’s exposed scam artists, shady contractors and organized crime figures. In recognition of his dedication and professionalism, this year he was awarded a prestigious Lifetime Achievement Award from the Radio Television Digital News Association.

Sitting alone inside a satellite truck on a chilly December 2012 afternoon in Newtown, Connecticut, I noticed something unusual happening. Tears were rolling down my cheeks.

A couple of days earlier, I had flown from Toronto to join an 11-person Global News crew in the small New England community where twenty children and six teachers at the Sandy Hook Elementary School had been gunned down by  a troubled young man who killed his mother before turning  the gun on himself.

As I was watching my cameraperson’s video of a community coming together to mourn the loss—strangers placing flowers and mementos on a makeshift memorial; locals paying respects at a funeral home—suddenly, I felt overwhelmed by the enormity of what had happened.

I had not viewed crime scene photographs of the horrific tragedy. We didn’t knock on the doors of family members. No one in the international press tried to get those kinds of interviews. But we were immersed in the lives of the people in a tightly-knit village stricken by unspeakable grief. The experience left its mark on me, as it likely did on all the journalists covering the story. 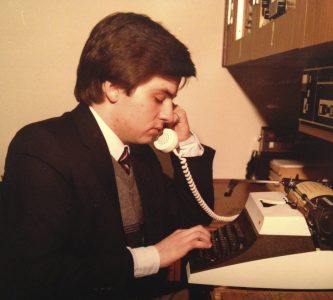 A few days later, as we packed up our temporary office,  a man with his daughter stood on the sidewalk holding a sign that read: “Media GTFO.” Media fatigue had set in and some people in the town just wanted to be left alone.

When I returned to Canada and went to buy a Christmas tree, it was not the usual uplifting experience. Covering the terrible deaths of those young children and their teachers had stolen the joy.

Unlike this particular assignment, covering the news for almost forty years has frequently been fun. I enjoyed reporting on two space shuttle liftoffs from Florida in the 80s and 90s, following the Challenger disaster. Election coverage has also been rewarding—from municipal, provincial and federal campaigns, to covering the U.S. race that ended in Washington with George H.W. Bush taking the White House, and the general election in Haiti following the murder of journalists and voters the previous year. Travelling to the Yukon when Jean Chrétien won his first term as prime minister was an adventure. And, reporting on the 1992 referendum, which could have triggered the breakup of Canada, was both exciting and terrifying.

I had caught wind of the U of R’s grand plan to create a unique prairie journalism degree program that merged academics with skills like writing, editing and on-camera reporting. It wanted a corps of students to make a name for this new Saskatchewan idea. The program’s first director, Ron Robbins, approved my application and I was among a small group of students with great hopes and dreams. 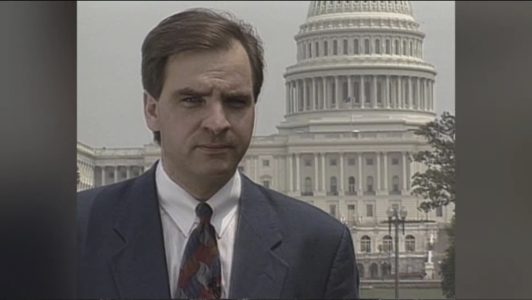 O’Shea reports have been filed from around the world including Haiti, Beirut, Ghana, and El Salvador to name a few. O'Shea is shown here reporting from Washington D.C. in the early 1990s.

My formal journalism career began after I arrived at the University of Regina in 1980. I had spent a year studying at  a university in Ontario and then worked as a radio and television reporter in Lethbridge and Calgary, where I was born and raised.

I had caught wind of the U of R’s grand plan to create a unique prairie journalism degree program that merged academics with skills like writing, editing and on-camera reporting. It wanted a corps of students to make a name for this new Saskatchewan idea. The program’s first director, Ron Robbins, approved my application and I was among a small group of students with great hopes and dreams.

At the time, journalism jobs were plentiful and, unlike many students today, I never had to work without pay to learn the trade. I was assigned to a four-month internship at the Edmonton Journal. I was paid $1,200 a month, which does not sound like much today, but it was enough to pay my rent and expenses while living downtown and getting experience in a big-market newsroom. I was rotated through general assignment as well as the crime and court beats. I also learned how to write obituaries. U of R’s paid internship program is still unique in Canada.

Months before graduating, I was already working as a weekend television anchor at the CBC in Regina. Later, I was hired as  a reporter in the TV newsroom of CBC Saskatoon. After almost three years, I relocated to Toronto where I’ve worked with Global News ever since. It’s now been more than 33 years! 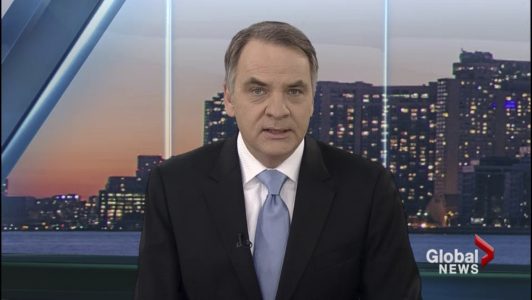 O’Shea is an award-winning investigative and consumer reporter and is regarded as one of the most tenacious reporters in television. He’s shown here anchoring Global News in 2015.

The journalism business has evolved dramatically over four decades. When I finished my degree, there were far more media properties and there was no such thing as online journalism. Today, many small-market stations and papers no longer exist. And, it is much more difficult for journalism graduates to find full-time employment quickly, if at all. At the same time, young graduates today are better educated. Many hold two degrees and often they’ve also earned a college diploma. I’ve had the pleasure of mentoring about 150 graduates, many of whom have gone on to careers in journalism all over the world.

For me, part of the joy of journalism is seeing how a story can improve someone’s life, at least a little. It’s one of the reasons why much of my work in the last twenty years has focused on consumer reporting.

Technology has driven many of the changes in the industry. Just before I graduated, television stations were still shooting stories on film. News crews frequently consisted of a team of three, with sometimes as many as four at the national level. Now, a crew can be just one person and the camera might just be a smart phone. As newsrooms shrink, television reporters are not only filing stories for the evening news, they’re also producing radio and online reports—sometimes simultaneously. In spite of all the changes, some news constants remain: figure out the story; write it without delay; and triple-check everything to avoid mistakes.

For me, part of the joy of journalism is seeing how a story can improve someone’s life, at least a little. It’s one of the reasons why much of my work in the last twenty years has focused on consumer reporting. I get hundreds of phone calls, emails and social media messages every year from viewers desperate to get  a sticky problem resolved. The problems include everything from contractors who take large deposits, but do no work, to airlines that won’t refund tickets even when flights have been cancelled.

In cases of fraud, many of the people who have contacted me got my name from a police officer who suggested that they might have better luck with me than the legal system. 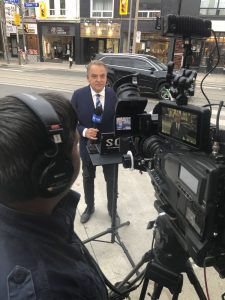 In his role as consumer reporter, O’Shea has exposed organized crime figures, scam artists, and unscrupulous contractors at frequent risk. He was once assaulted on-air by biker gang members who attacked him with a fire extinguisher. Shown here reporting from Toronto in 2020.

Sometimes, an unco-operative business will be quick to issue a refund or an apology knowing that it’s better than the negative media attention. But, typically, it’s not that easy. Businesses that would take someone’s money and not show up for work would prefer to keep the money and stay out of the spotlight. That’s why I’ve spent hours in unmarked vehicles with camera crews waiting for these people to show up after they haven’t responded to my phone calls. The unscheduled interview is a last resort and the outcome is unpredictable and sometimes ends in a chase.

Once, while trying to retrieve a vehicle from a body shop where a woman’s car was being held illegally, I got blasted in the face with a chemical fire extinguisher. Thankfully, I wasn’t injured. And, luckily, my cameraperson caught it all on video, which served as evidence for the judge who sent the tow truck driver to jail for assault. By the way, the woman got her car back.

Big companies don’t use fire extinguishers to quash  a negative story. Instead, they use lawyers. I could wallpaper an office with the letters I’ve received threatening defamation lawsuits. One was from the late legal legend, Edward Greenspan, who was representing a cosmetic surgeon who had left a patient permanently disfigured. In spite of the threats, we aired the story. The doctor and his lawyer never called again. That’s not to say that I haven’t been sued. It’s happened twice. Neither lawsuit was successful.

I have been fortunate to work for a news organization prepared to defend journalism, frequently at great expense. Once, a company threatened to pull all of its advertising if  I proceeded with a negative story. My news director asked me if I had all the facts. I was confident, so the story went to air and the company followed through with its threat. Even though the network lost several million dollars worth of advertising, it still supported me and our mission to inform the public.

Sometimes, as a reporter, you get an unexpected scoop. I was about to interview a lawyer representing a medical regulatory body when I discovered that he had been disbarred for wrongfully taking money from clients in his previous practice. His new employer was unaware because no one had done a reference check. I will never understand why he agreed to an interview. When I asked about his past, he ripped off his microphone and walked away. A few hours later, he was fired, and the story became the lead item on our evening news. I soon learned that the disbarred lawyer could pose a physical threat, so I temporarily had to relocate my wife and two daughters. It was the first time I was worried about my family’s safety because of one of my stories.

Concern for reporters’ safety and mental health is something that’s also improved over four decades. More and more, news organizations are providing equipment and training to help reduce risk. And, when journalists in the field face physical danger, they are allowed to make the final decision about whether to continue or back off. While in the war zones of Beirut and El Salvador, I felt I was on my own. Later in my career, while covering the Boston Marathon bombing and the fiery rail explosion at Lac-Mégantic, Quebec, where 47 people died, I got numerous phone calls from news executives asking how I was coping and if I needed help or counselling. This is an important improvement in how journalists are treated. It’s especially relevant as reporters, producers and camera crews cover the coronavirus pandemic, where physical and mental health concerns are heightened.

From my experience and observations, journalists usually get so caught up in telling stories, we may overlook or underestimate how we are affected in the process. That’s a fact I finally appreciate since reporting on the school shooting in Connecticut. Feeling sad as you rush to make a deadline doesn’t mean you’re weak. It means you still care.

Photos by Christopher Dew and courtesy of Sean O’Shea

As a junior college,  the U of S Regina Campus began offering first-year engineering courses. This year marks the 75th anniversary of what is now known as the Faculty of Engineering and Applied Science.