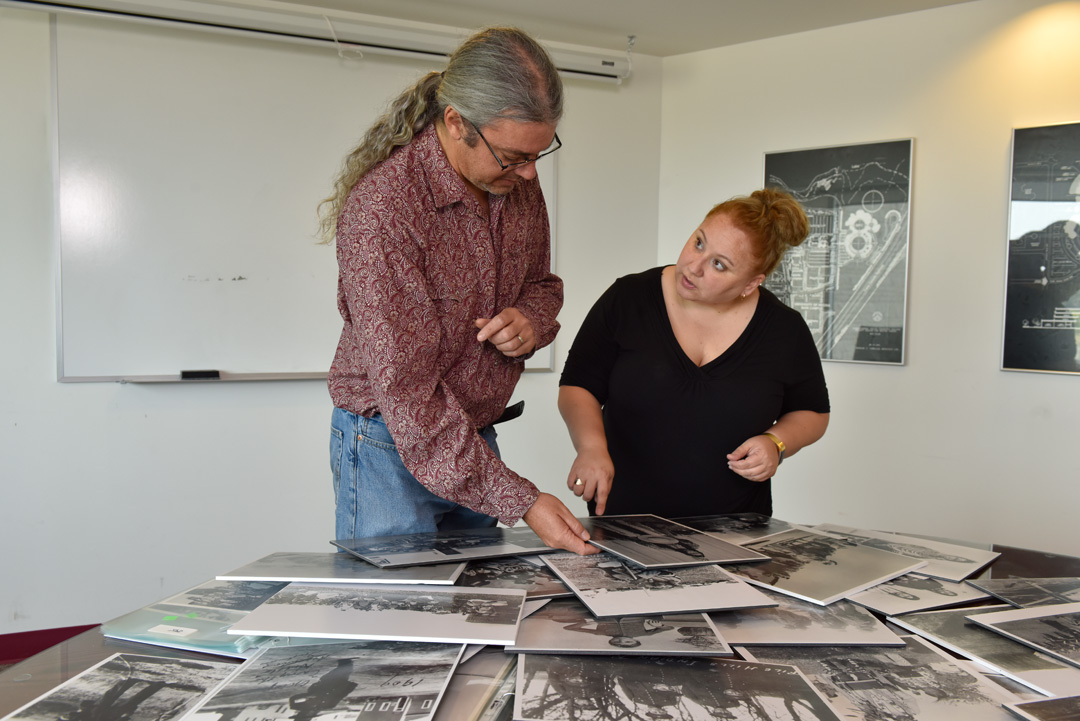 Indigenous Languages, Arts and Cultures professor Andrew Miller was poking around the basement of First Nations University of Canada when he came across almost 600 photos, most of them depicting late 19th century and early 20th century Indigenous life. Now, Miller is teaming up with others to ensure the photos are shared with Indigenous communities across the Prairies. In the process, he hopes the colonial narratives of the photos are deconstructed and the real stories of the Indigenous people in the photos come to life.

It was the start of a new school year in September 2016 when Andrew Miller inadvertently stumbled across a binder of 587 black and white photos in the basement collection of First Nations University of Canada’s Library (Special Collections). The photos, taken between 1877 and 1949, portray the lives of Indigenous peoples on the Canadian Plains. Nobody knew where the photos came from or how they became part of the collections. What was clear is that the photos had been archived, most likely by the Provincial Archives of Saskatchewan (formerly known as the Saskatchewan Archives Board).

Miller views sharing the photos with Indigenous communities not only as a way to deconstruct the colonial narrative but also as a repatriating practice.

Not all of the photographs have captions, but Miller is troubled by many of those that do. Referring to the collection as “colonial photography,” Miller has real concerns that the limited descriptions provided epitomize a settler narrative.

“Some of these photos and their descriptions really fit the colonial gaze,” he says. “I’m not overly concerned with factual names and events. I just feel as though the Indigenous community needs to see these first-hand.” 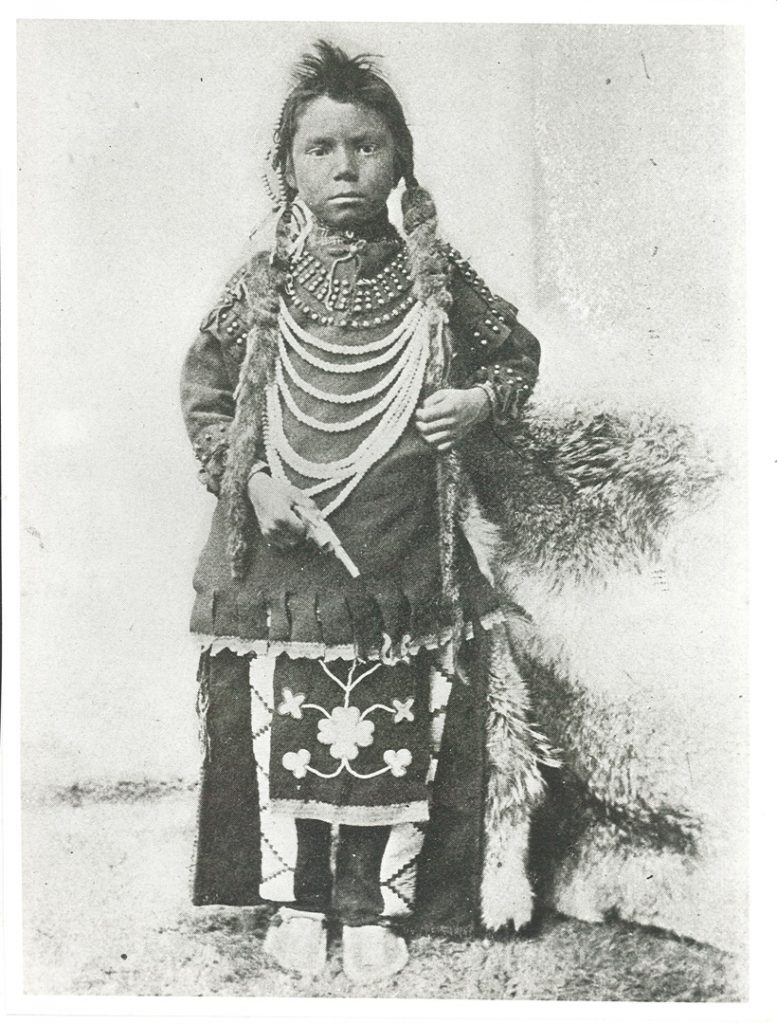 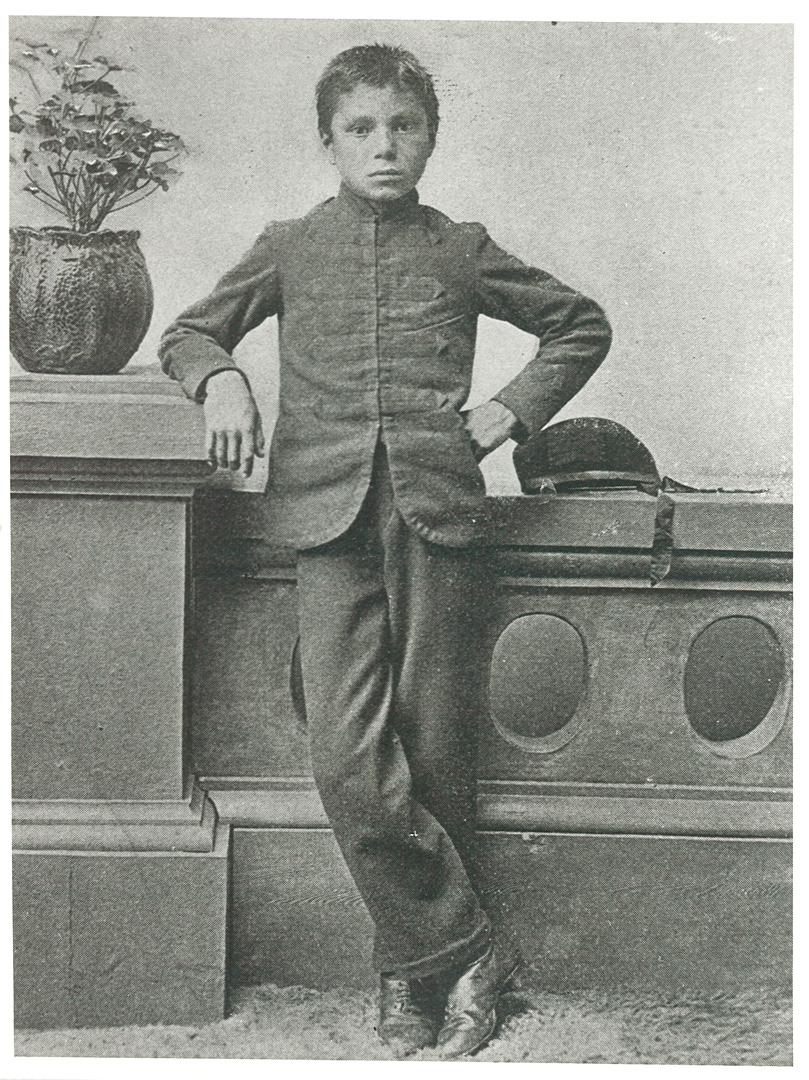 Miller views sharing the photos with Indigenous communities not only as a way to deconstruct the colonial narrative but also as a repatriating practice. He knew his first step was to consult Elders to ensure that the photo sharing was handled in the most culturally appropriate way. He received advice on protocols; what could be shared and what shouldn’t be public knowledge. Elders recommended that the photos be brought out in a ceremonial manner because telling stories of ancestors had to be done in a way that expressed gratitude.

“The simple process of bringing photos to the world and saying, ‘Here, let’s talk about these,’ is not doing things in the proper way,” Miller acknowledges.

To fully realize his hopes of humanizing the photographs and contextualizing the collection, Miller needed to expose the photos to a larger audience. In fall 2017, he took a sample of the photographs to Treaty 4 Days at Fort Qu’Appelle.

Miller’s display was set up amongst other organizations’ booths and local artisan kiosks. Samplings of photos were placed around the room, particularly those that had been taken in Treaty 4 Territory. Miller says the response that day was good. From the 30 photos displayed, at least half ignited conversations, comments and recognition from those who viewed them. One of those conversations was started by Wayne Goodwill.

“Wayne immediately was fixated on the photo of Martha Taweyaka and her husband Louis,” Miller says. 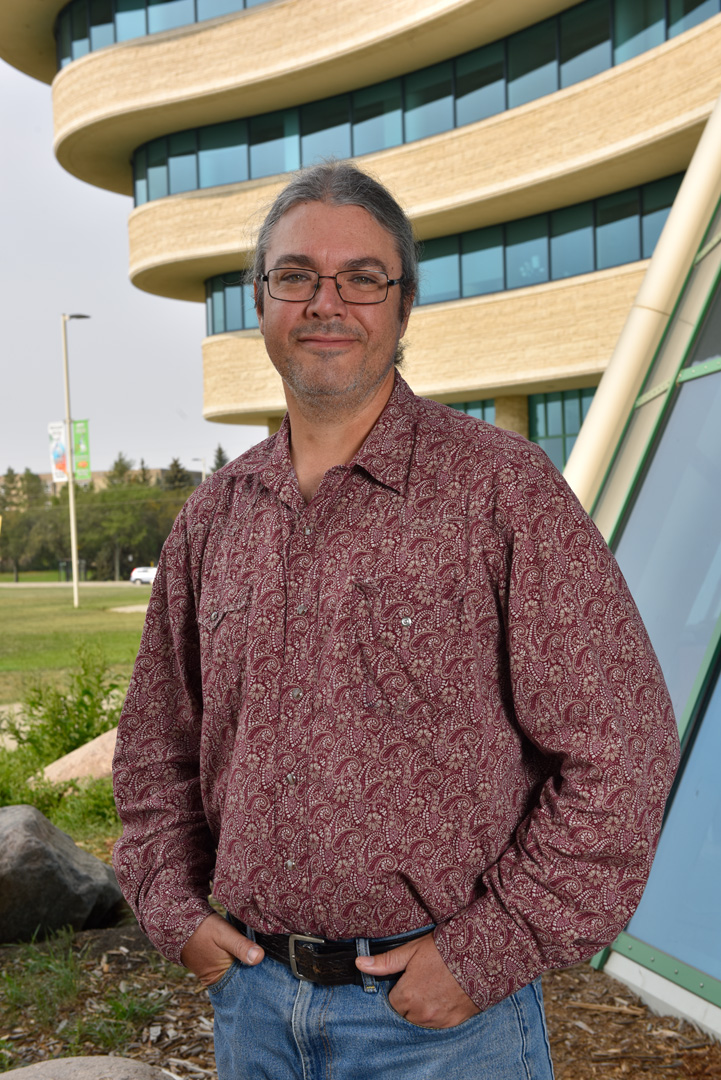 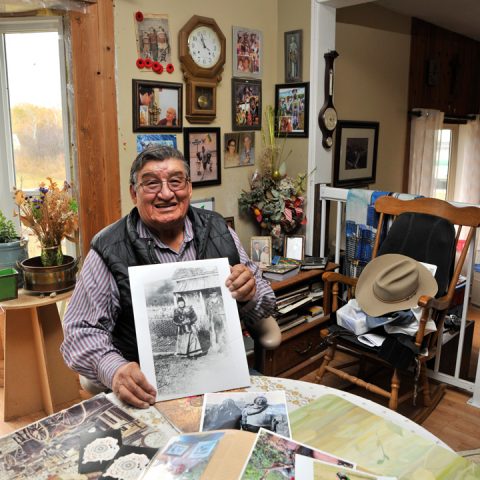 Wayne Goodwill is photographed with the photo he saw at Treaty 4 Days in Fort Qu’Appelle, Saskatchewan. Goodwill recognized the woman in the photo as his grandmother, Martha Taweyaka and her husband Louis Taweyaka. (Photo by Don Hall)

It was the first time Goodwill had seen the photo, but he knew the woman — it was his great-grandmother.

Goodwill is from Standing Buffalo First Nation and is a well-respected Knowledge Keeper in his community. An avid hunter and a long-time artist, Goodwill attended the Qu'Appelle Indian Residential School in Lebret. Many years ago, Goodwill’s aunt shared with him a story of his great-grandmother Martha at the last Sundance (or Ghost Dance) that Sitting Bull attended in the Canadian territory. The ceremony would have been around 1880 when Taweyaka was still a young girl.

Taweyaka loved her community and was known to partake in the community’s Powwows. Her husband Louis was an announcer — or as they were known at the time, one of “the criers.” Goodwill suggests she would have danced in outfits similar to the one she is wearing in the photograph.

“She was a teacher who helped open the day school on Standing Buffalo reserve,” Goodwill explains. “She even cut the ribbon on its opening day.” Goodwill has come to know that Taweyaka was well-respected and fluent in English. She travelled to the Standing Buffalo area after her marriage to Louis. Although it is still unclear as to where she resided before settling there, Goodwill is certain Taweyaka is of Lakota and Dakota ancestry. The couple had four children.

Miller suggests that sharing the photos is the only way to bring the subjects to life. “Martha went from being anonymous to being a person who has a fully developed story,” he says. 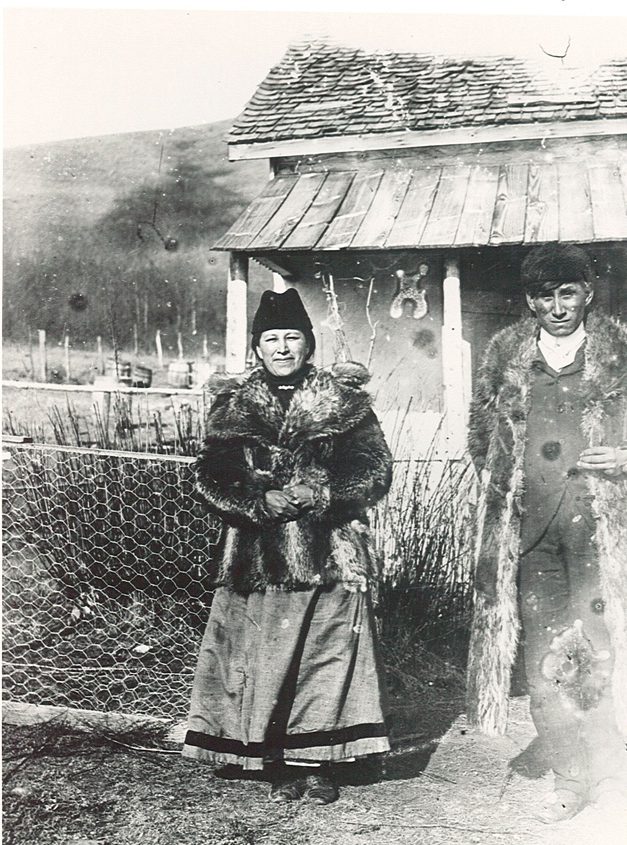 Miller notes that the residential schools tried to erase familial lines. “It’s time to flip that narrative and challenge it. It is important to keep in mind who is on the other side of the photographs,” he adds.

It had always been Miller’s hope that an Indigenous archivist would take over the project and connect it to Indigenous communities in a way that he never could. A year after the photographs were displayed at Treaty 4 Days, Miller was approached by a master’s student in archival studies from the University of Manitoba. Carmen Miedema, originally from the Peepeekisis Cree Nation in Saskatchewan and an archivist for the National Centre for Truth and Reconciliation, has a keen interest in the collection. 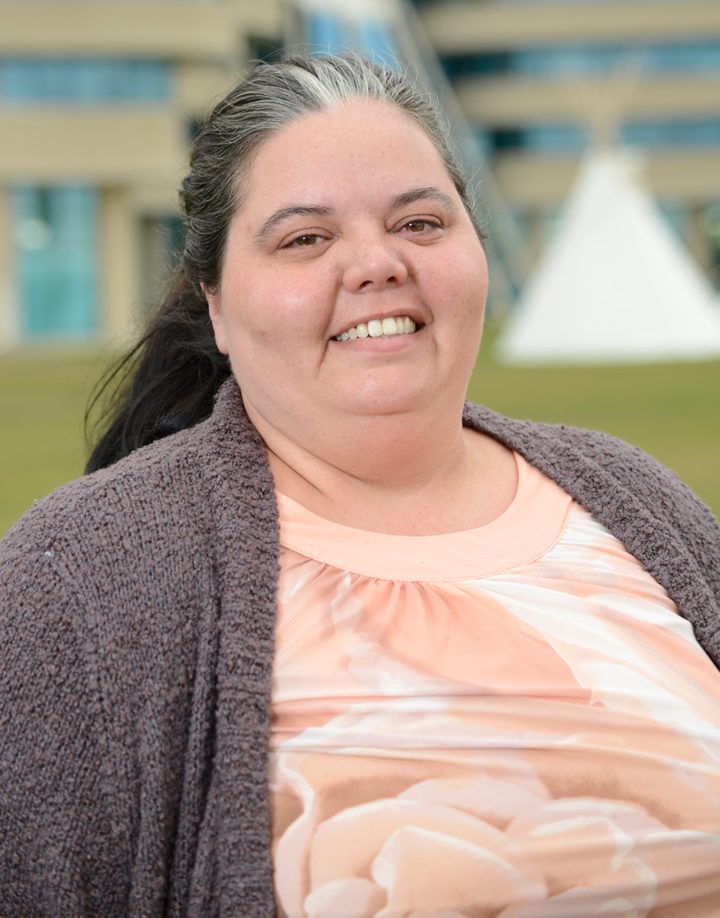 Carmen Miedema, a master’s student in archival studies at the University of Manitoba has a keen interest in the FNUC archive photo collection. Miedema is also an archivist for the National Centre for Truth and Reconciliation. (Photo by Trevor Hopkin)

“I became interested in the collection while completing an assignment during my undergraduate degree at Brandon University,” Miedema says. “It was also during this time that I learned that archival practices are still extraordinarily colonial and unfair to Aboriginal peoples — something I’d like to change.”

Miedema has plans to take the photographs and tour them throughout Manitoba. It is her hope that the photographs will be more appropriately recognized in an Indigenous context and, more importantly, will be repatriated to the communities in which the photographs were taken.

“Telling our own histories is crucial to being able to teach future generations about our truths, in our languages and through our protocols.”

Miedema believes it is essential to archive Indigenous stories in an Indigenous context. “We should have the right to tell our stories the way we see, experience and understand them,” she says. “It is important because how we look at, experience and understand our stories is often completely different than the colonial point of view in which they have been written. Telling our own histories is crucial to being able to teach future generations about our truths, in our languages and through our protocols. It means giving power back to our people.”

Miller often gets people reaching out to him who have family ties to a photograph. He hopes that will continue on an even larger scale once the photos become more accessible through an online database. The online project is funded, in part, by a generous donation from Pasqua First Nation’s Chief Todd Pagan, who is enthusiastic to see Indigenous students working on the database.

Cheepoostatin, also known as Pointed Cap, a respected Elder of the Indian File Hills Agency, receiving treaty money in 1916. Cheepoostatin was 108 years old when the photo was taken.

“There are a number of photos that specifically relate to Chief Pagan’s community,” Miller explains. “The database would allow the people of Pasqua First Nation and area to easily access the photos and share them within their community. Students, researchers and community members will be able to access them. They have been in the provincial archives but they’re not scanned or online or easily accessible. You’d have to be there in person or ask for the photo by name, which is too tall of an obstacle.”

Once the project is complete, Miller says all the photographs from the collection will be available through the First Nations University of Canada website. Then, students like Miedema, community members like Goodwill, or anyone else with an interest will be able to access these important, historical photographs in their proper context.

Nickita Longman is from the George Gordon First Nation in Treaty 4 Territory but has spent most of her life in Regina. She graduated from the First Nations University of Canada with a BA in English in 2013. As well as working as a freelance writer, she is a community organizer.

Two University of Regina graduates followed their passions and found careers in service to others. One of the first responders recently retired from the Regina Police Service. The other is the head of the Regina Fire and Protective Services.