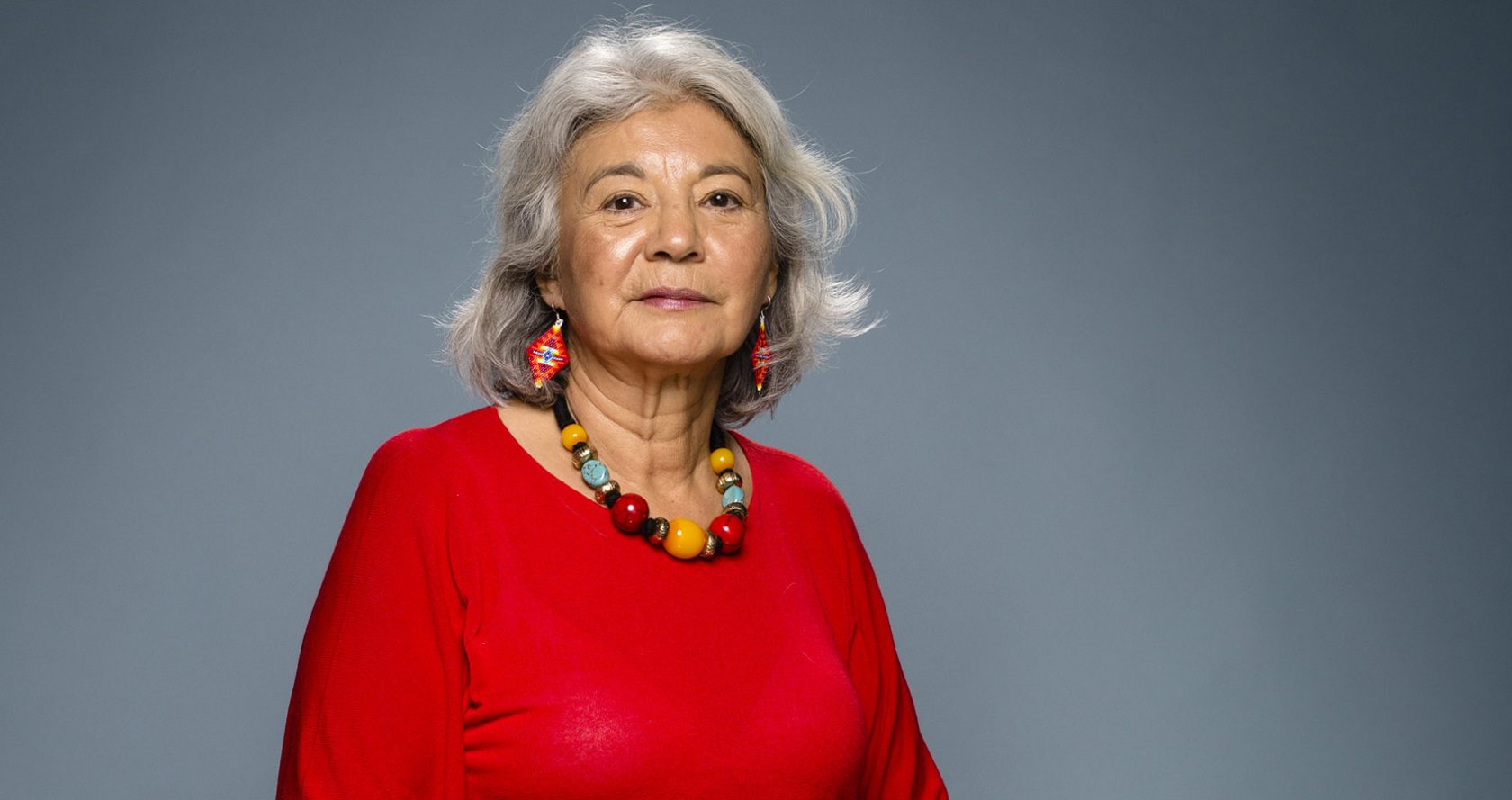 U of R Alum shares her voice

While she graduated from the University of Regina’s Social Work program, Louise Bernice Halfe BSW’84, also known as Sky Dancer in Cree, was destined for a different journey. After a lifetime of writing, in early 2021, she was named the ninth Parliamentary Poet Laureate.

Earlier this year, in the aftermath of a fierce winter blizzard that shut down much of Saskatchewan, Parliamentary Poet Laureate, Louise Bernice Halfe, reflected on how such events fuel her poetic inspiration.

“The storm that just travelled across the prairie provinces revealed a whole lot of mystery to me,” she said from her home outside of Saskatoon. “I had to get to my computer. Usually, I have a cup of coffee in the morning and that's when I do my longhand writing. But sometimes the urge comes to write my thoughts quickly before I start my usual morning routine When the muse is speaking, you don't ignore her. You get on your chair right away and get your fingers moving. You listen, and you write. It comes from a very spiritual place.”

“I started writing when I was 16 but it was all about teenage angst. It wasn't very good, I didn't even know it was poetry back then,” she laughs.

Halfe started following her muse more than 50 years ago. Born in Two Hills, Alberta, and raised on the Saddle Lake Reserve, she served as the second Poet Laureate for Saskatchewan in 2005 but her writing journey started decades earlier.

“I started writing when I was 16 but it was all about teenage angst. It wasn't very good, I didn't even know it was poetry back then,” she laughs.

Created in 2001, the position of Parliamentary Poet Laureate advances poetic literature across the country. Halfe has served in the role since the beginning of 2021 and will finish her term at the end of this year. Among her responsibilities is writing for Canada’s Senators and advising the Parliamentary Librarian on acquisitions. According to Halfe, the first Parliamentary Poet Laureate raised in an Indigenous community, the insights that she has brought to the role about the devastating legacy that residential schools has had on the nation — has brought her the most satisfaction.

“My greatest contribution as Poet Laureate is bringing an awareness to mainstream society about what has happened since the closure of residential schools,” Halfe says. “I have brought a deep awareness of the historical trauma that was imposed on so many people. I think it also has opened up doorways for other people from different nations to share their traumas. There's much more dialogue going on in the attempt to understand and to move forward.” 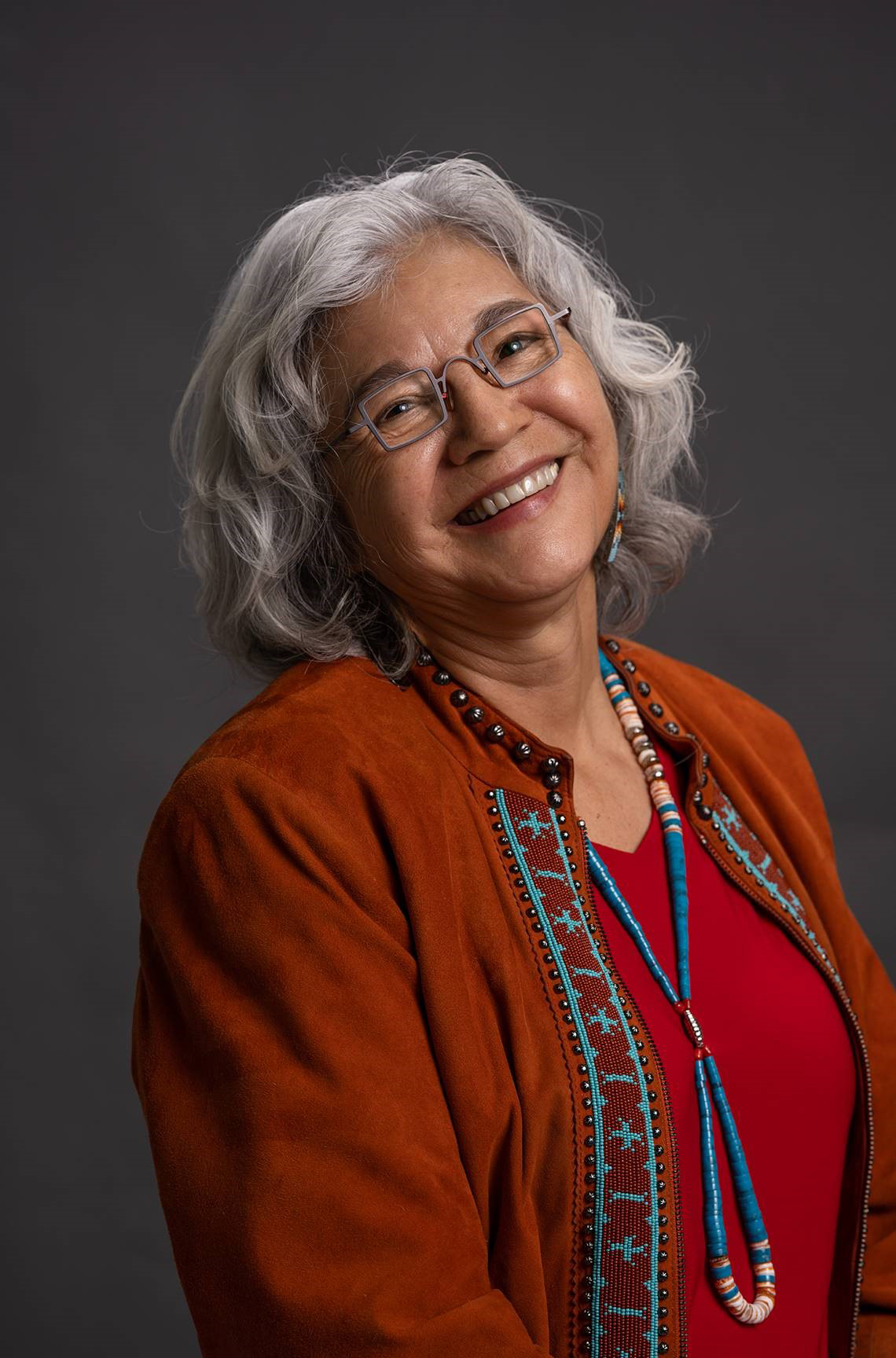 Halfe’s first work appeared in the 1990 Writing the Circle: Native Women of Western Canada, an anthology of writing by Indigenous women.

Among the accolades she has received are the Milton Acorn People’s Poet Award for Bear Bones & Feathers, her first book. The book was also shortlisted for the Spirit of Saskatchewan Award and the Gerald Lambert Award. Louise's work has appeared in various anthologies and magazines.

Blue Marrow, her second book, was a finalist for the Governor General's Literary Award for poetry in 1998. Burning in this Midnight Dream won the League of Canadian Poets Raymond Souster Award and the High Plains Book Award. She received the Writer’s Trust Poetry Prize in 2017. Halfe has received honorary degrees from Wilfred Laurier University, the University of Saskatchewan, and Mount Royal University.

One of the unique characteristics of Halfe’s writing is her use of both English and Cree, a technique she says she discovered in the writing of others.

“What I would observe in other people's literature, and writing, is that there were quotes in French, Latin, Italian, or German, and they would not bother translating that language for the reader and I found that challenged me. I thought if they can do it, there's no reason why can't I?”

Burning in this Midnight Dream was Halfe’s response to the work of the Truth and Reconciliation Commission of Canada. She is hopeful that one day, the Commission’s 94 Calls to Action will be fully implemented.

“I hope we'll get to a place where all the Calls to Action are addressed,” she says. “My children are well-educated and their children are better educated – they will challenge the system. If they're not going to listen to people of my generation, you can bet the new generation is going to do something about it.”

Once again, the tree is pierced.
Pressed onto its parchment
are asotamatowo, the exchange of desires.

Much like breaking Bannock
pahkwinamawew
this shared understanding
of askiy, land based education
and cultural richness are the hopes
beaded into its skin.

Unlike the signing of the treaties,
the Whiteman’s agenda will not hold
promises they will not fulfill.
Like a marriage of mutual understanding,
shared responsibility and consequences
their kiskeyihtamowin – this knowledge
will be painted on canvas.
Shared berries pollinated by bees,
nurtured by the rain, ripened by the sun,
will be picked to feed the people.

These grandmothers and grandfathers, are the energies
that must be adhered to.
They are your witnesses.

This past November proved a momentous one for Tara Clemett (BAdmin '98), when she was appointed Saskatchewan's Provincial Auditor after serving as Acting Provincial Auditor since July. Originally from a farm near Hodgeville, Saskatchewan, Clemett moved to Regina with her family in 1990, first attending Campbell Collegiate, and then the University of Regina with a major in accounting. Clemett takes on the role of Saskatchewan's Provincial Auditor with a breadth of experience that spans more than 20 years of audits in areas including financial, performance, IT, healthcare, child welfare advocacy, and the environment. Her busy schedule also includes an active involvement with advisory groups under the Canadian Council of Legislative Auditors - and when she's not doing that, she can often be found either on or near the ice, coaching ringette. Degrees chatted with Ms. Clemett about teamwork, zebra mussels, and why she loves what she does.

As Provincial Auditor, you're responsible for keeping a close eye on how Saskatchewan's public resources are managed and used. What draws you to this type of work?

I have always liked working with numbers, collaborating with people, and being part of a team. I truly believe the work we do at the Office of the Provincial Auditor makes a difference for the people of Saskatchewan. I have participated in various audits at our office that have had a positive impact on improving public administration. Some audits that come to mind include processes around aquatic invasive species, portable computing devices, and mental health services.

We conducted an audit at the Ministry of Environment, looking at their processes to prevent the entry and spread of aquatic invasive species in Saskatchewan. Obviously there are other jurisdictions where there are zebra mussels, and other aquatic invasive species that have ended up in their lakes. So if someone is transporting their boats between those lakes and they come to a lake in Saskatchewan, there should be a mechanism that, hopefully, ensures that they've cleaned their boat appropriately.

"When I was choosing universities, I knew I wanted to study in Saskatchewan. I thought the University of Regina's Faculty of Business Administration had great professors and was a strong program, so it just made sense to stay in Regina."

We made a number of recommendations including the need for more awareness around the role the public plays in making sure they prevent the spread of aquatic invasive species in our province. I like camping, and we have boat, so when we see the signs everywhere now that say "clean, drain, and dry your boat", I felt like our office ultimately had a role to play in increasing some of that understanding and awareness.

What do you wish more people knew about this job?

That the job is about more than just numbers - it's about maintaining strong relationships and providing relevant audit results and recommendations in our public reports. Along with financial audits we also conduct performance audits. We provide our recommendations to the Standing Committees on Public Accounts and Crown and Central Agencies, and we follow up on these recommendations until they are implemented by government agencies and publicly report on progress as we follow-up.  And then we keep following up - we go back every two to three years and we determine whether the government agency fixed and addressed whatever we identified as deficiencies or deviations.

How do you feel your time at the University of Regina prepared you for your professional life?

My time at the University of Regina taught me effective communication skills, to manage multiple competing priorities, and to be accountable for my work. I became self-motivated and driven to make the most of my opportunities from attending university. The University of Regina equipped me with skills to assess, apply my knowledge, and act in my future career. Ultimately, my university experience helped me realize I was responsible for my own success.

It's also your hometown school - was that of particular appeal when you were deciding where to go for university?

I wanted to stay close to home to some degree. When I was choosing universities, I knew I wanted to study in Saskatchewan. I thought the University of Regina's Faculty of Business Administration had great professors and was a strong program, so it just made sense to stay in Regina.

Also, my involvement in ringette kept me connected to Regina. I really appreciated the opportunity to still be around my friends, have my family support me, be able to play ringette in Regina - and go to university at the same time. I just felt very connected to Regina, so it made sense to stay here. 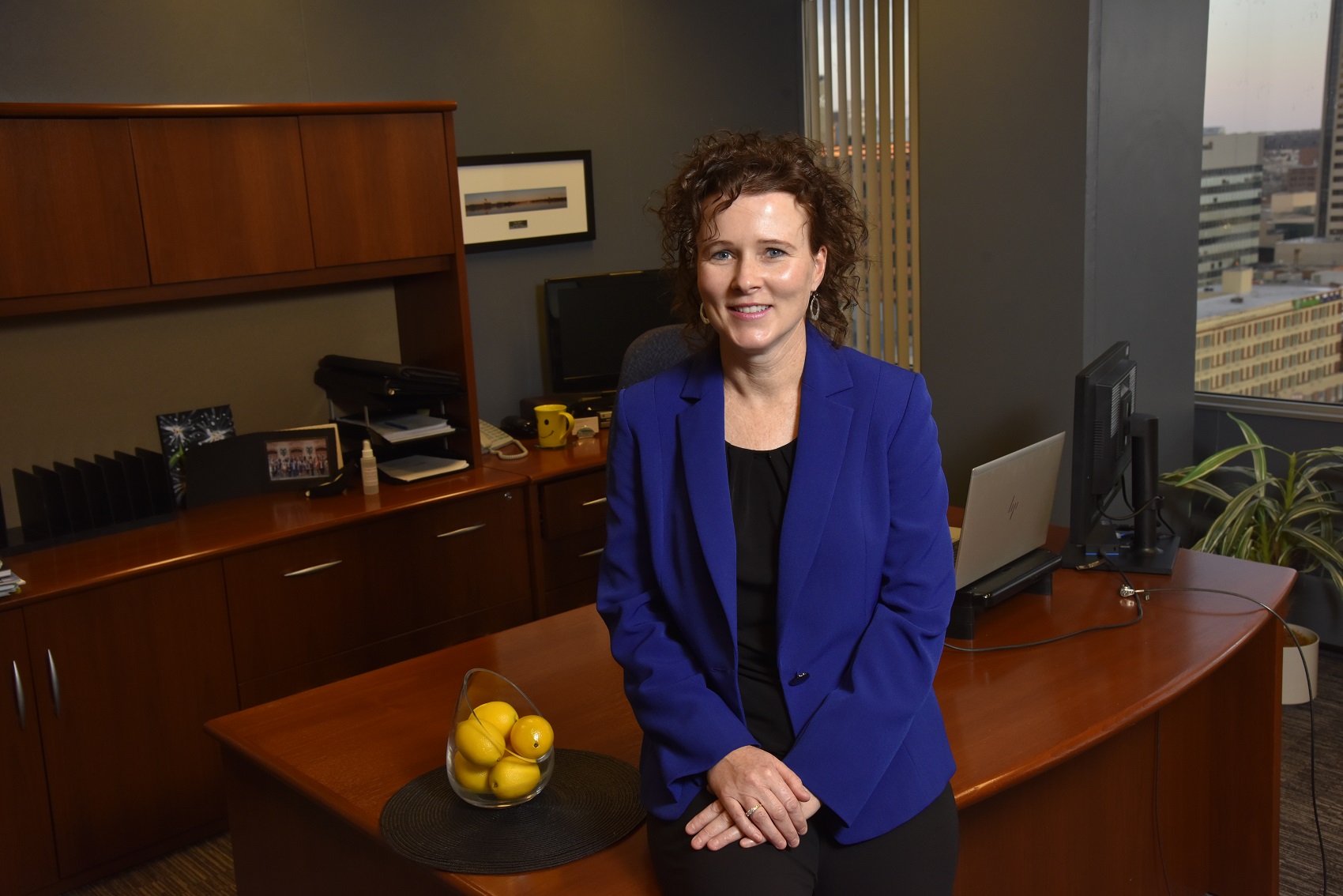 Originally from a farm near Hodgeville, Saskatchewan, Clemett moved to Regina with her family in 1990, first attending Campbell Collegiate, and then the University of Regina with a major in accounting. And you're still involved with ringette - now as a coach. As a young person, you represented Saskatchewan at nine Canadian Ringette Championships, bringing home four medals.
When did you start playing?

I actually started figure skating first, at age three or four, and then when I was 10-years-old, I started begging my dad to play hockey, and then he actually started (a ringette team) in Hodgeville, where we lived. I started playing competitive ringette as we moved to Regina and played for 13 years. I started playing again when I was 40, played for four more years, until COVID hit, and then I retired. I still go on the ice and help out with coaching. I'm currently a Board member on Ringette Saskatchewan and a coach, and have coached both my daughters in ringette for the past nine years.

Ringette seems like a really tough game. What kind of training does that provide?

It's not as physical as hockey - or it's not supposed to be (laughs). It's supposed to have less contact. It's different - you have to be able to skate, and then a lot of the strategies of the game that really parallel to basketball. I loved the competition and the teamwork - and that you had to find your role. It was all about being accountable for yourself and understanding what your strengths were, and utilizing them on whatever team you're on.

What advice would you have liked to have received as a young graduate, starting a career?

Do something you are passionate about. Be a team player. Say yes to things that scare you. Keep learning - think of yourself as lifelong learner. I continue to learn something new every year I work at this office.