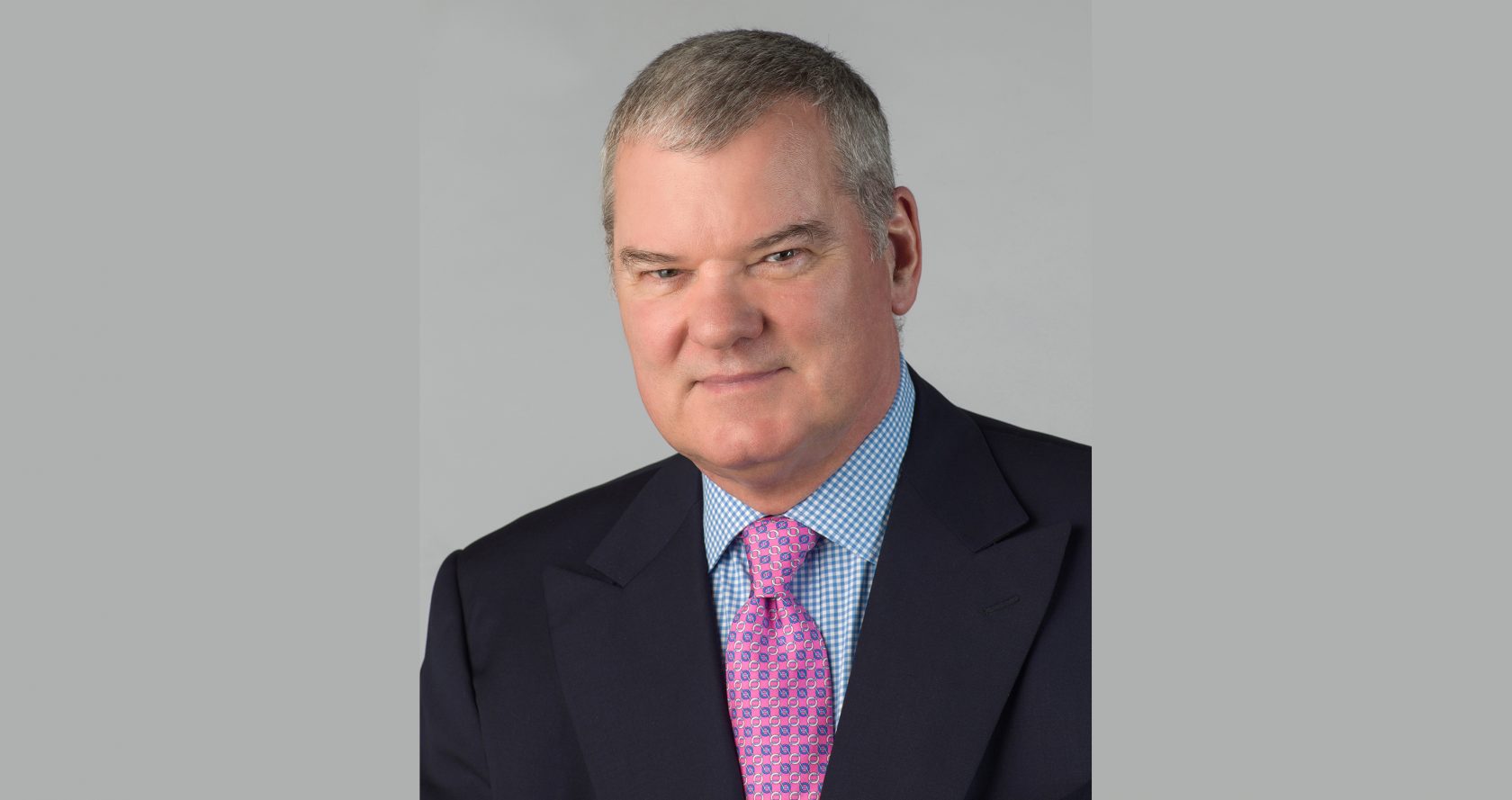 Allan Bonner’s BEd’78 extraordinary career began 40 years ago with the first of many post-graduate degrees – a Bachelor of Education Degree from the University of Regina. Ever since he has been building his professional experience and skills and is considered one of the most respected risk and crisis managers in the world. He has worked on five continents, lectured at universities in England, Russia, the United States, and Canada, and his books are used as texts at leading universities in North America and England.

During his career, he has counselled nearly 30,000 senior executives and played a role in working through some of the most controversial public issues of our time. These issues include: Hong Kong’s return to China, European Union, NAFTA, overfishing, cross-border pollution, G7 meetings, Kosovo, Gulf Wars I & II, 9/11, and the recent OECD and G20s attempt to make the international taxation issue, Base Erosion and Profit Shifting (BEPS), or so-called transfer pricing, more equitable and rational.

Allan has consulted to the military (JAG, Chiefs of Defence Staff, Provost Marshall, Peacekeepers), international diplomats (including at the UN and its agencies), domestic, offshore and central banks, oil, gas, and chemical companies and other blue chip clients on five continents.

He has worked with 12 heads of government, more than 100 cabinet ministers and UN officials in Nairobi, Malta, Vienna, and New York. Two of his long-standing clients are Nobel Peace Prize recipients. 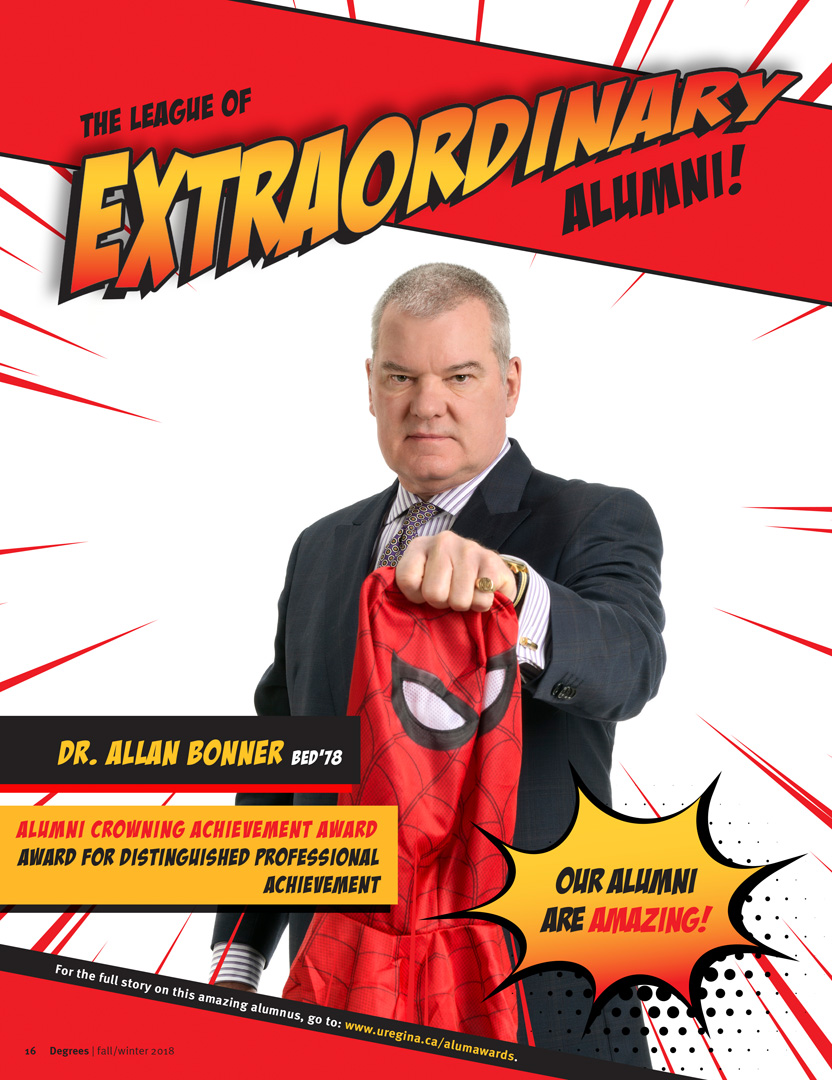 Allan began his career as a journalist at the local and network levels in Canada and in the United States. In Saskatchewan, he worked for CJME and both CBC Radio and CBC. He holds graduate degrees in: political science; business administration; law; risk, crisis, and disaster management; and urban planning. He is currently studying for a degree in public policy and administration which will be his seventh post-graduate degree.

He was the first North American to be awarded a post-graduate degree in risk, crisis, and disaster management. A life-long learner, Allan has been trained in negotiation skills and leadership at Harvard University’s John F. Kennedy School of Government. He has taken extension courses at the University of Toronto, and is part-way through a certificate in emergency preparedness at Ryerson University.

Allan has just been named to the board of the Mackenzie Institute, the think tank dedicated to security issues.

This year marks the 14th anniversary of the University of Regina’s flagship alumni award program – The Alumni Crowning Achievement Awards. The awards were established to celebrate the accomplishments of University of Regina alumni who have realized outstanding achievement in their field. Meet this fall’s deserving recipients.

This year marks the 14th anniversary of the University of Regina’s flagship alumni award program – The Alumni Crowning Achievement Awards. The awards were established to celebrate the accomplishments of University of Regina alumni who have realized outstanding achievement in their field. Meet two of this fall’s deserving recipients.

This year marks the 14th anniversary of the University of Regina's flagship alumni award program - The Alumni Crowning Achievement Awards. The awards were established to celebrate the accomplishments of University of Regina alumni who have realized outstanding achievement in their field. This year's gala was held on October 18 at Regina's Evraz Place with some 260 alumni and friends gathered for the celebration, the highest attendance in the gala's history. Meet this year's deserving recipients.

(The screened background under the text above is an illustration of the Alumni Crowning Achievement Award. The award is a miniature version of one of the panels from the Joe Fafard sculpture Le Jardin de l'esprit that adorns the north side of the University of Regina campus.)

When the University of Regina was awarded the honour of hosting the 2018 USports Women's Basketball Championship, it became apparent that coordinating volunteer activities and event logistics would require extraordinary leadership. To use the basketball vernacular, it was a “slam dunk” when Amy Moroz BEd’98 and Andrea Ward BEd’00, MEd’10 were named co-chairs of the prestigious event that the University has hosted three times since 2009. Just as they had done two decades earlier when they led the Cougars women’s basketball team to the cusp of a national championship, the duo, proved they were formidable all-stars. 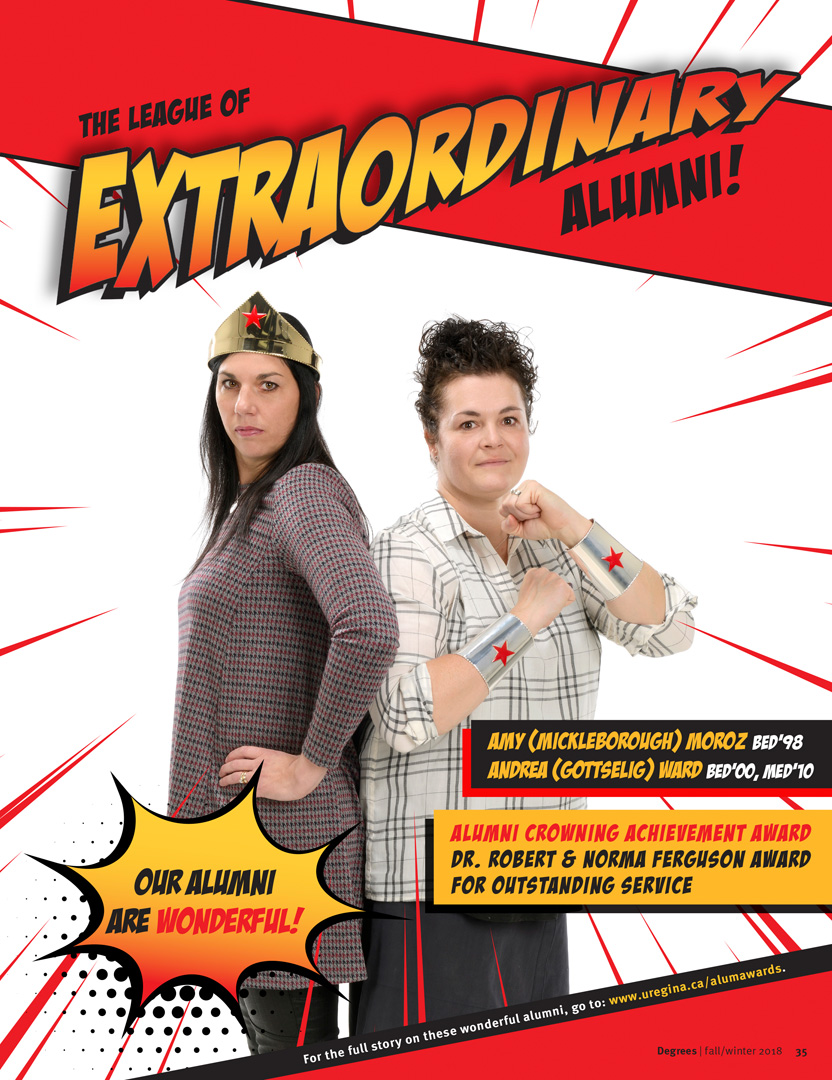 The Dr. Robert and Norma Ferguson Award for Outstanding Service is presented to a graduate (or graduates) to recognize outstanding volunteer leadership and service to the University’s Alumni Association. Both Amy and Andrea graduated with Education degrees and now work in Regina schools as teachers and coaches – ensuring the next generation of basketball players is as skilled as those of the past.

In cooperation with the University and USports, the pair oversaw an outstanding committee that consisted of alumni and committee members from past years’ championships. Amy and Andrea’s inclusive and collaborative leadership style ensured that all committee members were empowered and brought their best to the table.

The pair’s vision was to provide all participating teams and fans with an extraordinary experience during their time in Regina. Alumni activities were plentiful during the weekend, drawing graduates from across western Canada, as well as from the U.S. Although the Cougars fell short in their bid to win the national championship, alumni and the packed Kinesiology Centre gym, enjoyed cheering them on to a bronze medal win.

In every aspect, the tournament was a success and brought a lot of positive exposure to the University of Regina because of Amy and Andrea’s leadership.

As former University of Regina Athletics director, Dick White commented, “Their approach of engaging former members of the Cougars Women's Basketball program to provide the leadership foundation for committees and operation of the tournament was unique and undoubtedly will have a long-term impact for those women and their connection to our University. The event was memorable for all who participated whether as an athlete or fan and this was due in no small part to the vision and leadership of Amy and Andrea."