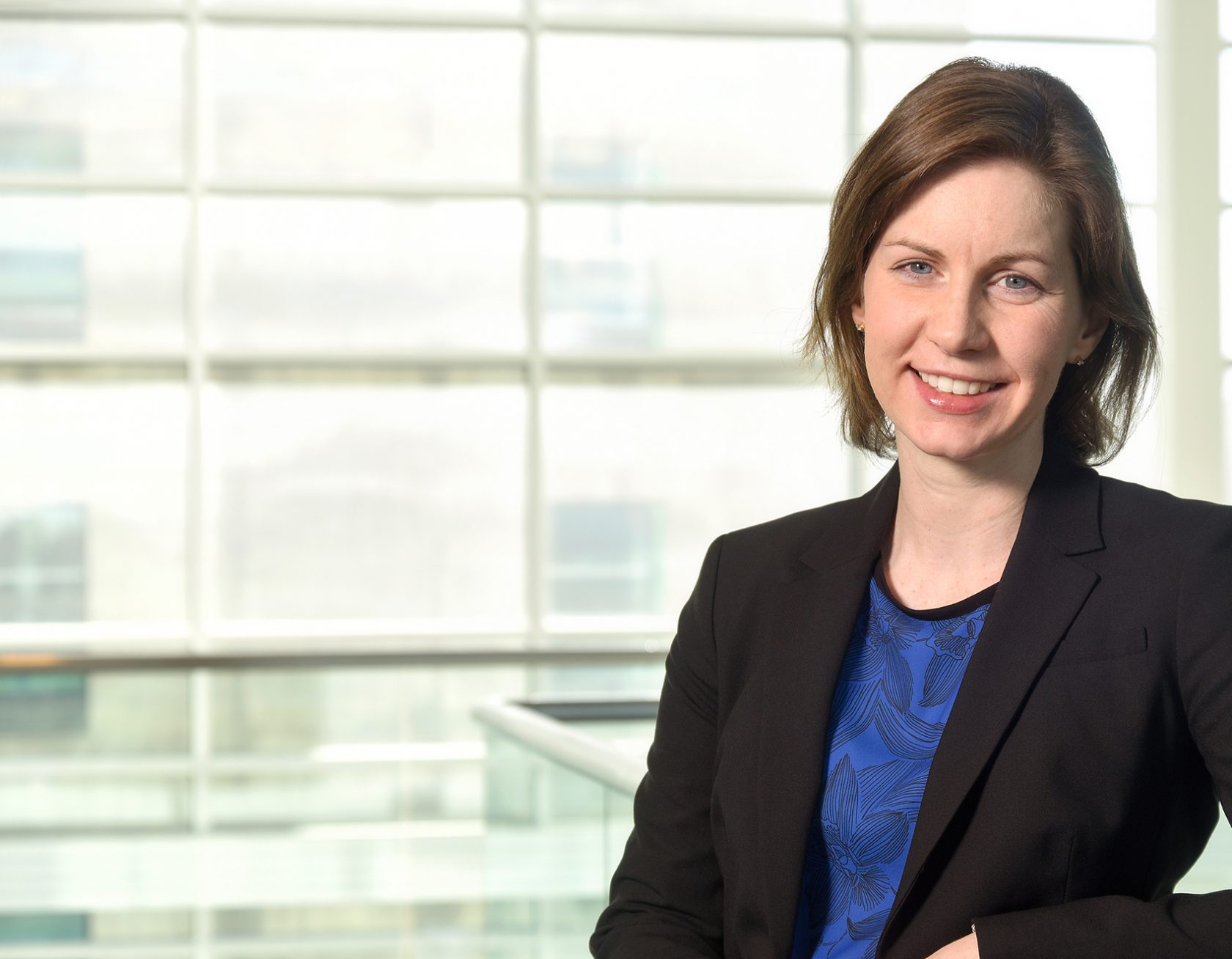 Depression and the menopause transition

University of Regina researcher Jennifer Gordon is at the forefront of the study of perimenopausal depression, depression related to infertility, depression in pregnancy and postpartum depression.

“You literally can feel it pushing you down. You would swear someone has their hand on your head and they’re just lowering you to the ground.”

That’s how Jennifer Johnson, a Regina mother of two teenagers, describes the lows that have hit her frequently since she entered perimenopause, also known as the menopause transition, the period of a woman’s life when she is approaching menopause and starts to experience symptoms of declining estrogen levels. Johnson has been feeling the impact of perimenopause for several years. First came the night sweats, soon joined by hot flashes, insomnia, irregular periods and the relentless lows. 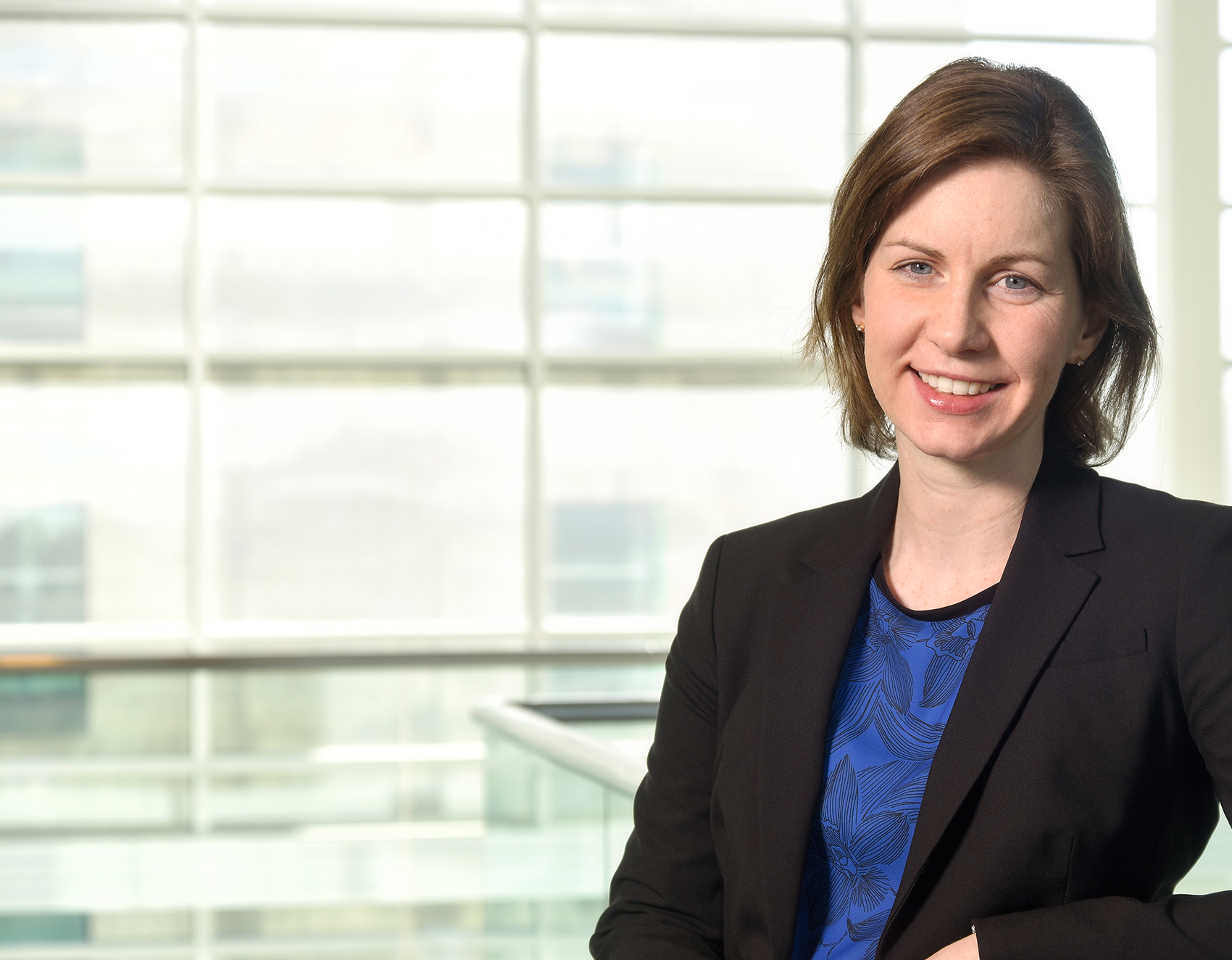 Those lows first appeared when she was dealing with other problems, including conflicts with her son’s father and a cancer diagnosis. All the burdens sent her to her doctor to ask for help, which is something she says she rarely does because she is “fiercely independent.” Now, she is better able to handle the lows herself.

“I think when you have been going through it as long as I have, the sadness or depressions don’t last as long anymore,” she says. “You also know you are going to come out the other side, so that makes it easier. I just don’t let it affect me the same way.”

Now, Johnson has joined other sufferers and researchers to try to change the plight of women plagued with perimenopausal depression. She is a patient-investigator in a University of Regina research study led by Jennifer Gordon, an assistant professor of psychology.

Gordon has chosen to build her research program around women’s reproductive health and much of her current work is focused on depression in perimenopause. She was working towards a PhD in clinical psychology at McGill University in Montréal, focusing on depression and cardiovascular disease, when she took a class from Barbara Sherwin, a renowned expert in human psychoendocrinology (the study of the relationship between the endocrine system and mental health). Gordon chose to do a presentation on depression and estrogen. She was fascinated and knew immediately that this was where she wanted to focus her research.

About the same time, she met Susan Girdler, an American researcher whose work is focused on the effect of reproductive hormones on mood, specifically during phases of reproductive change, including post-partum depression, perimenopausal depression, and depression tied to the menstrual cycle.

“We really hit it off,” Gordon says. The meeting convinced her to apply to the Québec Health Research Foundation for a post-doctoral fellowship to study with Girdler and colleague David Rubinow at the Women’s Mood Disorders training program at the University of North Carolina at Chapel Hill.

“It was a very intense three years,” she says. “It’s a very demanding program but it’s very good training. You learn how to write competitive grants and publish high-quality papers and learn all about women’s reproductive mood disorders, very much focused on the biology and physiology, which was good because my background had been in clinical psychology.” 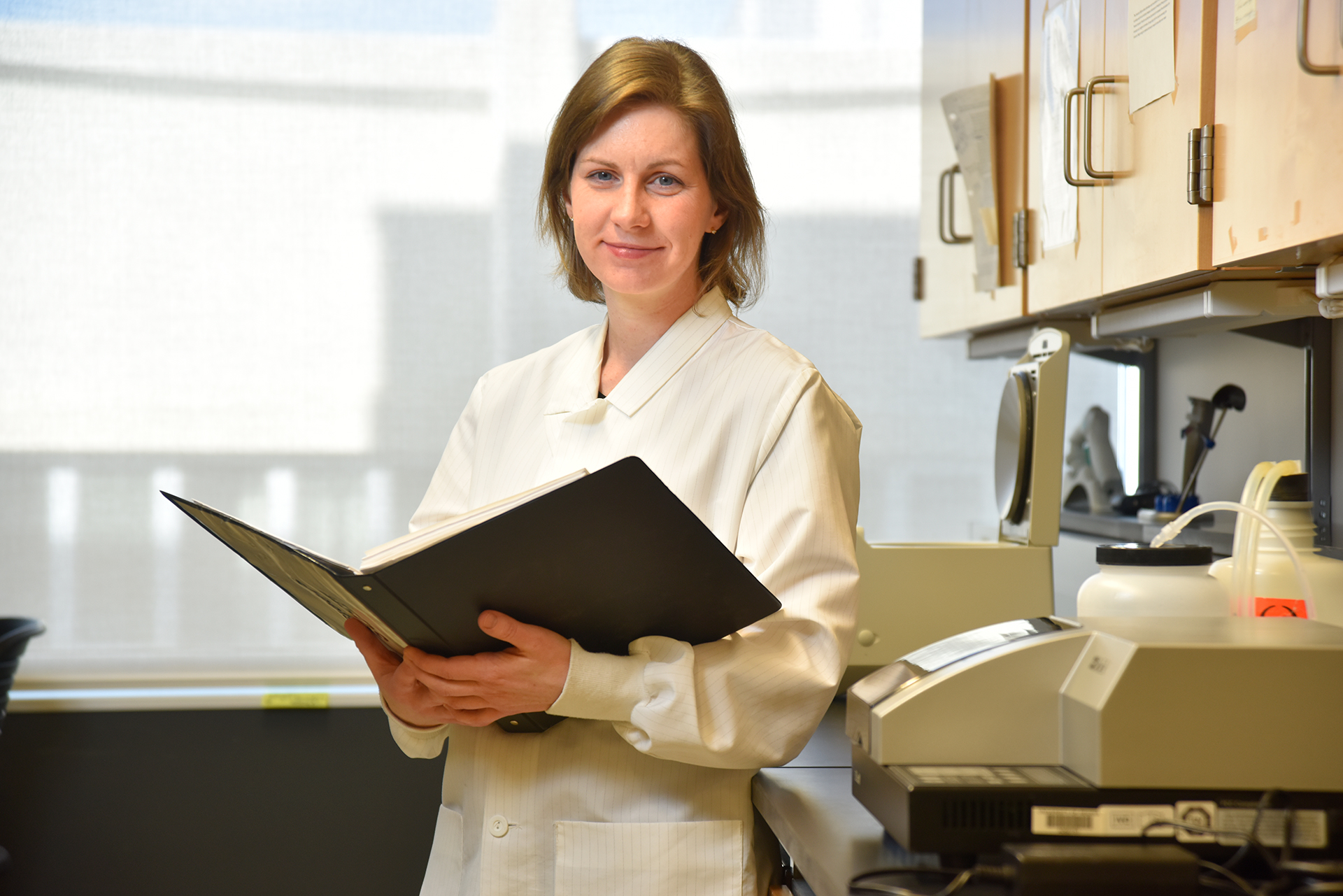 Jennifer Gordon is a leading researcher in perimenopausal depression. (Photo by Trevor Hopkin)

At Chapel Hill, Gordon worked on the Perimenopausal Estrogen Replacement Therapy (PERT) study, a $4 million trial that looked at the use of estrogen replacement therapy for the prevention of depression in the menopause transition.

“It’s the first trial to look at estrogen for the purpose of preventing the onset of depressive symptoms in the menopause transition,” Gordon says. “There have been a few small trials finding it can reduce depressive symptoms in already depressed women in the menopause transition … so this was looking at recruiting initially emotionally healthy women, putting them on estrogen and seeing if they show any mood benefits from that.”

Results of the study, recently published in the JAMA Psychiatry medical journal with Gordon named as lead author, were impressive. Seventeen per cent of the women receiving transdermal estrogen through estrogen patches developed clinically significant depression, while 32 per cent of those receiving placebo developed depression. Two groups of women benefited more than others – those who had experienced stressful life events in the preceding six months and those who were in the early years of the menopause transition.

“The effects of estrogen were pretty striking in preventing the onset of depressive symptoms, especially in the early menopause transition. Of those who were on placebo, nearly 50 per cent of them had clinically depressive symptoms at some point in the study, whereas in the estrogen group the percentage was only three per cent,” Gordon says.

Gordon’s long-term goal is to establish a women’s mental health research unit at the University of Regina to facilitate patient-oriented research in women’s reproductive mental health.

Critics say that giving estrogen to prevent depression is out of line with current recommendations. Gordon doesn’t dispute this statement, but she says those recommendations were based on research that showed giving estrogen to older women who are late into menopause could be dangerous. More recent research proposes that estrogen is much safer in younger women who are in the menopause transition or early postmenopausal period. It is generally agreed that more study is needed.

“And I could see that there were very successful people in the department,” she says. “I wanted a department that had mentors built in … so I liked that too.”

She continues work on the PERT study – among other things, she will write a paper on the impact of estrogen therapy on the cardiovascular health of participants. At the same time, she is building her own women’s reproductive mental health research program. With her background in clinical psychology and her training on the biology and physiology of women’s reproductive mood disorders, she is in an ideal position to create a program that encompasses both.

Her first Regina-based study is the Fluctuating Estrogen and Menopausal Mood (FEMM) study, funded through an establishment grant from the Saskatchewan Health Research Foundation (SHRF), which she says will be the most detailed look so far at the correlation between hormones and mood in the menopause transition.

Gordon is hoping to broaden her research program to include other areas of women’s reproductive health. As a first step, she is proposing the development of a psychological intervention for women struggling with infertility.

“There haven’t been any studies looking closely at the correlation between hormones and mood in the menopause transition. We think that extreme estrogen fluctuation may play a role in triggering depressive symptoms during the menopause transition, but previous studies have generally measured estrogen too infrequently, making it difficult to figure out what hormonal triggers may be involved in perimenopausal depression.”

The study will measure estrogen and progesterone levels in participants, as well as mood, depressive symptoms and other factors that can impact mood, such as sleep and hot flashes, and baseline factors such as recent stressful life events, history of trauma, history of mental illness and sleep quality. Separate funding from the Banting Research Foundation will allow researchers to look at levels of cortisol, a stress hormone in saliva, to see if it is affected by hormonal fluctuations.

As a clinical psychologist, Gordon is also interested in exploring non-pharmacological interventions for the prevention and treatment of women’s mood disorders. She has initiated a study that will look at the use of mindfulness-based stress reduction (MBSR) to reduce the risk of depression in the menopause transition. This study will be funded through an SHRF Sprout Grant.

“Some of my research suggests that the hormonal environment of the menopause transition increases sensitivity to stress and that’s why women are more likely to develop depressive symptoms,” she says. Reducing stress using MBSR might help those women avoid depression.

This study will be the first time Gordon has undertaken “patient-oriented” research, a style of research that involves patients, families, health professionals, researchers and policy-makers working together to plan research, carry out research projects and help interpret and make use of the findings. She is enthusiastic about it and hopes to become a leader in the field.

“Across Canada there’s a big push towards patient-oriented research,” Gordon says. “The idea is you are doing research that is addressing patient-identified priorities, things that matter to the people who are affected by whatever you are studying. And they would be involved every step of the way.”

Gordon has named two “patient-investigators” who were involved in the study design and will sit in on the first MBSR sessions to make sure they are tailored appropriately to the target population. They will also be involved in tasks such as the approval of questionnaires, analysis of results and dissemination of information.

Tracy Morgan, a participant in the FEMM study, is one of those patient-investigators. Morgan is excited to be involved in the MBSR study. She says her role fits with the skills she has developed as a medical lab technician and trainer at Canadian Blood Services, as well as her interests in subjects such as yoga and meditation. She feels the study may even help her deal with her own symptoms of perimenopause. 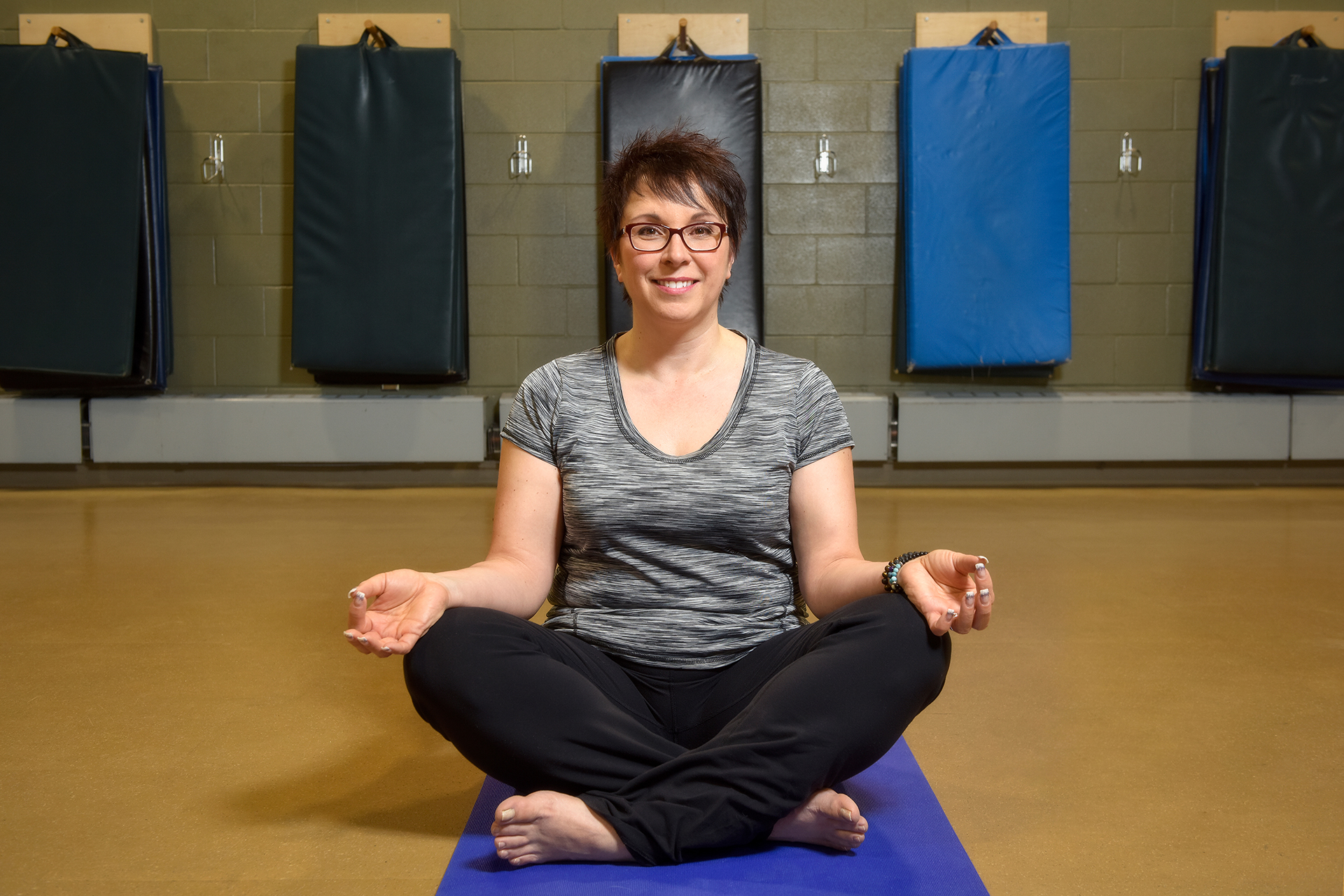 “I will be participating in this study and helping others,” Morgan says, noting participants may feel more comfortable dealing with someone like her who is experiencing the same life change. “But it may also help me find a routine, maybe meditation and yoga, and I can keep using that long after the study is over. It will help me build my own routines, rather than trying to figure out all this on my own. I will have some input from some very knowledgeable people.”

Gordon is hoping to broaden her research program to include other areas of women’s reproductive health. As a first step, she is proposing the development of a psychological intervention for women struggling with infertility. She says patient-investigators will be especially valuable in designing this project because “better understanding their experience of infertility will allow us to create a more effective treatment program.”

“The rates of depression and anxiety are very high in women struggling with infertility, even if it’s their partner with the diagnosis. Approximately 30 to 40 per cent of women experience significant depression or anxiety as they are undergoing fertility treatments, and so far, psychological treatments are not terribly effective at improving that.”

Gordon says the idea for this project grew out of discussion in the third-year Women’s Reproductive Mood Disorders class she teaches. She created and loves teaching this course because the syllabus covers all her interests – including premenstrual dysphoric disorder, infertility, depression in pregnancy, postpartum depression and perimenopausal depression. She says that a class discussion about infertility distress highlighted the idea that coping with infertility is even more difficult for women in Regina because they have to travel to get help.

“This mission is directly in line with the Saskatchewan Ministry of Health’s mandate to improve the province’s treatment of mental health,” Gordon says.

Deborah Sproat is a freelance writer based in Regina, Saskatchewan.

A look back at the Cougars

The University of Regina women’s basketball program has been one of the best and most enduring programs in the country.

In a gesture to honour his late father who battled depression throughout his life, University of Regina alumnus Jim Demeray established UnderstandUs. The volunteer organization raises awareness and works to remove stigmas associated with those living with mental health challenges.