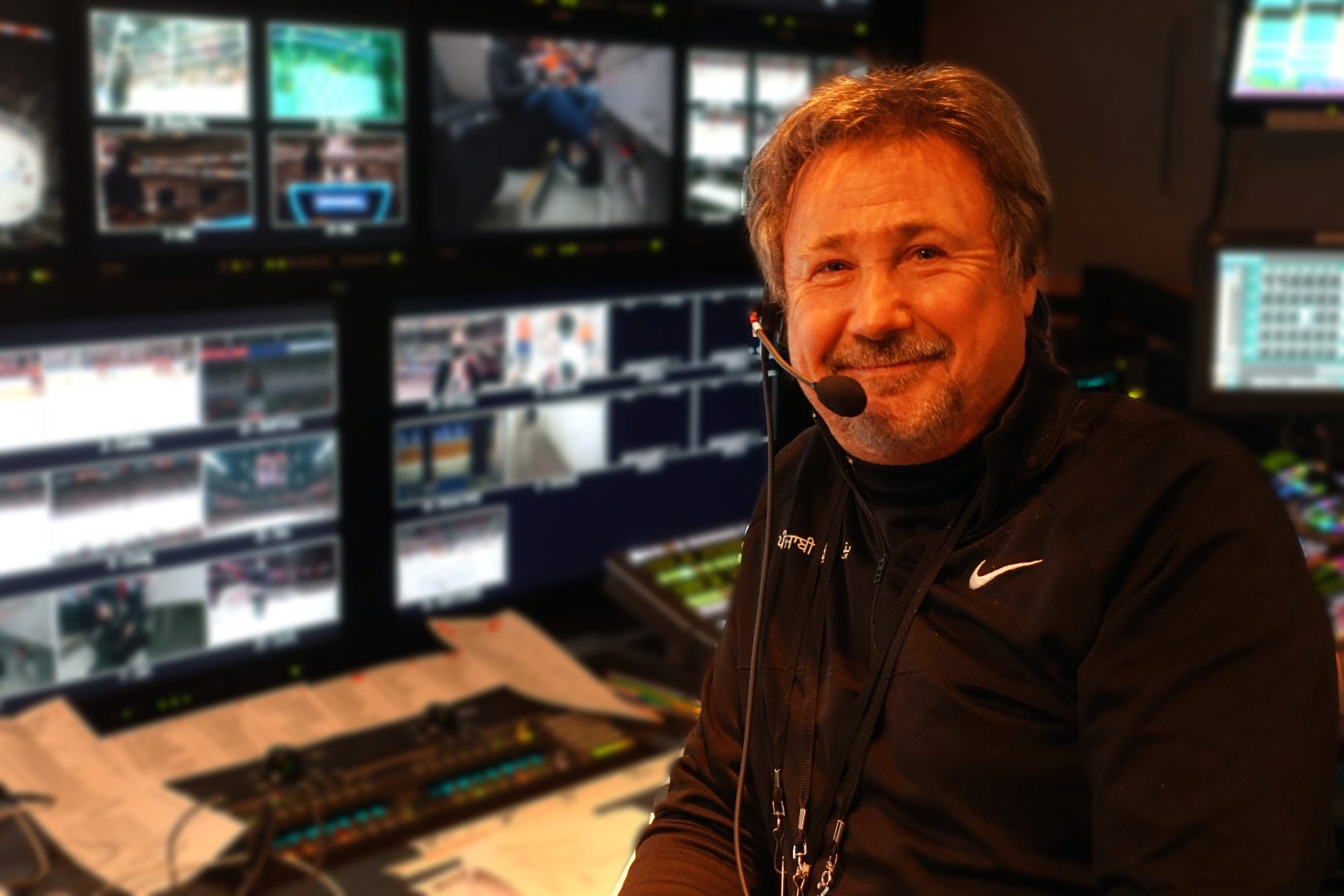 Ron Forsythe returns to Regina to accept the 2021 Distinguished Alumni Award from MAP’s Department of Film.

This past Friday night, as hockey fans watched the Edmonton Oilers maintain their four-game winning streak against the New York Rangers, many would have tuned in a little earlier to catch live coverage of the jersey retirement ceremony for long-time Oiler Kevin Lowe. As has been the case at thousands of history-making moments in sport, live TV sports director Ron Forsythe was there, documenting it all – and sharing it in real time with millions of viewers across the continent. It’s been another whirlwind week for Forsythe – which is to say a typical one for a person who spends upwards of 150 day per year on the road. “I worked a game last Saturday, Monday, Wednesday, and (this past) Friday. This week I’ll go to Winnipeg on Friday, then back home to Vancouver after a couple of weeks on the road. It’s been 40 years of travelling,” he laughs.

This week marks a particularly special homecoming for Forsythe as he returns to his hometown of Regina to receive the 2021 Distinguished Alumni Award from the University of Regina’s Department of Film. Forsythe (BFA ’80) was, in fact, the very first to graduate with a BFA (with Distinction) from the newly-minted film program in 1980 – though was already working in television before he graduated, finding opportunities with Cable Regina (now Access 7 Regina) to work with the types of professional broadcasting equipment he’d go on to use in newsrooms and studio floors at CBC Calgary almost immediately following graduation.

He’s been working almost non-stop ever since – 30 years with CBC Sports, and then, merely two weeks after his retirement from the national broadcaster, Rogers Sportsnet came calling with an offer he couldn’t refuse – he’s been working with them, directing live coverage of hockey, for the past decade.

Over his long and varied career, Forsythe has directed live broadcasts of 21 Stanley Cup Finals, 16 Grey Cups, nine Olympic Games, and dozens of other major sporting events around the world including the Commonwealth and Pan American Games, World Athletic, World Cycling, and World Swimming championships, among many others.

It’s an extremely fast-paced work environment. Live television is challenging and high-stress even in its most basic forms; making the kinds of on-the-fly directorial decisions needed to cover lightning-quick movements with multiple cameras on ice or on the field requires the kind of next-level skills Forsythe is renowned for in the industry, and he’s garnered 15 Gemini and Canadian Screen Award nominations, and nine trophies to show for it. It’s work that Forsythe obviously loves.

“When you get to direct a world feed of anything – you’re on the world stage, they’re relying on you to provide them with coverage,” he says. “I was lucky to be the host director for ice hockey at the 2014 Winter Olympics, and for a Canadian guy, that’s a big deal. All the medal games were done by myself and our Canadian crew. Those images went all over the world, so the world was relying on Canadians running that host feed to tell the story of ice hockey at the Olympics.” This February, Forsythe is looking forward to directing live feeds from the Beijing Olympics. “The CBC wants me to spend a month in Toronto. The show will go on at 6 a.m. and off at noon,” he says. “And I can’t wait to do it!”

While regularly singled out by his industry peers as a go-to person for sports coverage, Forsythe is quick to point out that his work, too, is about teamwork.

“The people I work with is the other thing that’s kept me excited about staying in the business,” he says. “There’s a giant machine that goes along with covering these giant events. I’m just a quarterback. It’s real team, and that’s what I’ve really enjoyed over the last 40 years.”

“I’m also look forward to connecting with some students if I can – I’d like to mentor. And to be honest, next week is a light week where I get to visit with my mom and have a couple of days off,” he says. “Chilling in Regina is exactly what the doctor ordered.”

Kelsey (O’Byrne) Zipchen BEd’10, BA’17 has a unique job. She’s a teacher on film and television sets across Canada, tutoring young actors who are missing school. Zipchen taught in Regina and Saskatoon before her husband, actor and host Tanner Zipchen, found work in Toronto. While spending time with him on location, she learned about on-set teaching. She went on to earn a California Certified Studio Teacher designation in an intense four-year journey that included a course in child welfare and labour laws, more than a dozen state and subject exams, and additional university classes through UCLA.

One of Saskatchewan's most popular breweries earned a distinction that has put it on the national craft beer brewer's map. Rebellion Brewing Company, a Regina-based brewery picked up three awards at this year's Canadian Brewing Awards; including their Cherry Lambic being named Beer-of-the-Year at the September competition. The beer, which was also deemed top beer in the Belgian-style sour ale category, bettered all others in a competition that featured thousands of beers in 56 different categories. Another Rebellion beer, Hoppy Pollinator, topped the list for honey/maple lagers or ales.

Mark Heise BAdmin'00 is president and CEO of Rebellion Brewing. The U of R graduate started the company about seven years ago after fine tuning his beer-making skills as a home brewer. He got serious about the craft in 2005 and started entering beer-making competitions the following year. His first competition yielded him a second place overall honours and Heise was hooked. He would go on to win some best-of-show awards including a 2009 gold medal for his IPA in the biggest competition in North America, the National Homebrew Competition. He received a silver medal at the same competition the following year. 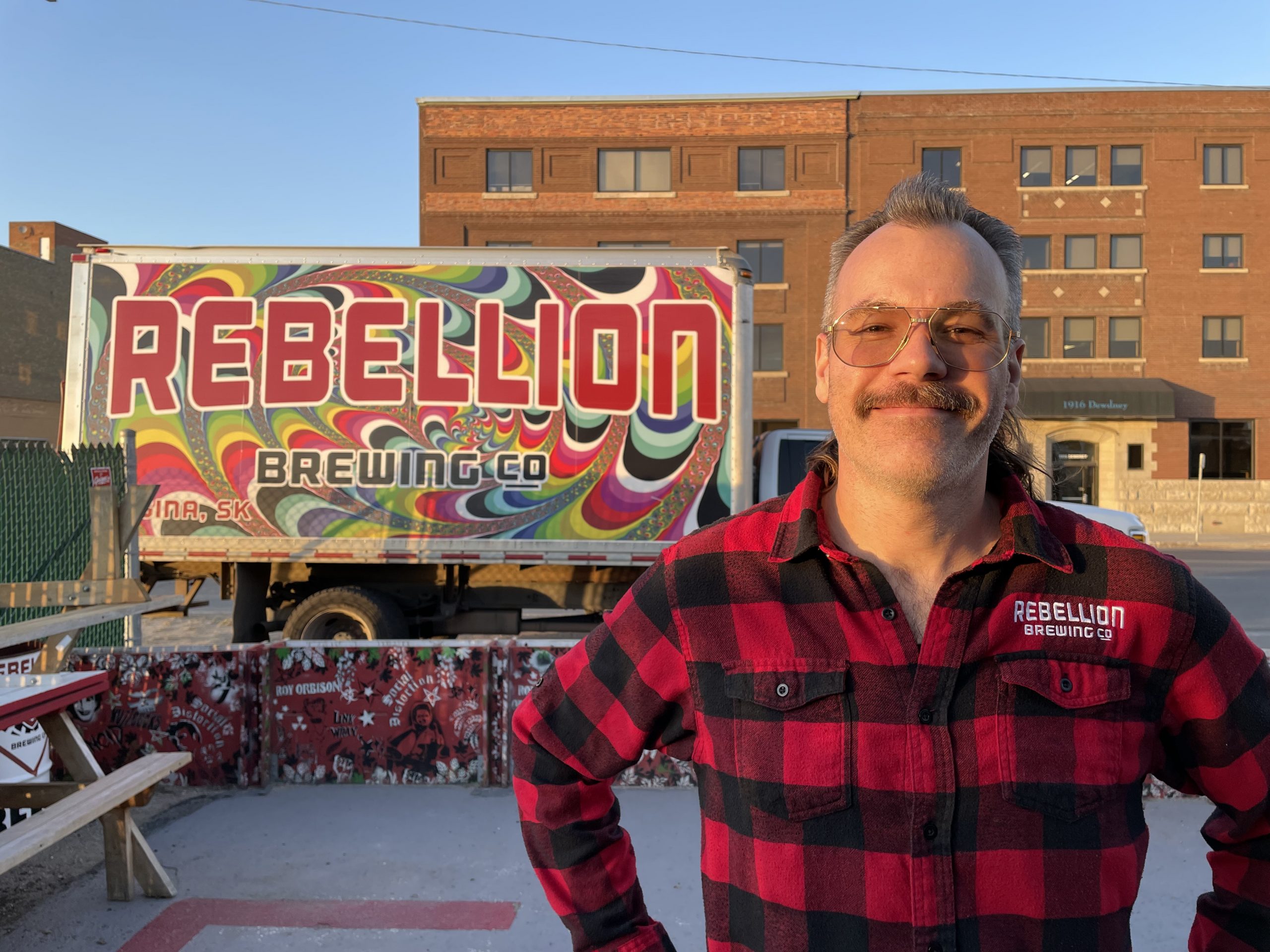 Heise graduated from the U of R with a business administration degree in 2000. He says his time at the University prepared him well for an entrepreneurial career.

"Brewing is a combination of science and art," he says. "In beer making, there's endless options for creativity. That's really what attracted me to brewing - plus I like drinking beer."

The Rebellion beer that won top honours at the competition is Cherry Lambic, one of Rebellion's seasonal beers, meaning it's only available for a specific period of time. Aged in oak barrels, the Belgian Brussels-style beer has a bright, tart character that gets its primary flavouring from cherries from Over the Hill Orchard and Winery in Lumsden, Saskatchewan.

"That beer took about three years to make," says Heise. "It's a very specific type of Belgian-sour beer that has to age in oak barrels for at least one year. This one took longer. Sometimes you have to wait for the yeast to do what yeast does. We are hoping to have some more on the market in the next year."

Heise says that earning the distinction as producing Canada's best beer is an advantage in today's busy craft beer marketplace. He says there are about 1,200 breweries in Canada, each producing 30 to 40 beers a year.

"There are so many breweries in Canada that it can overwhelm a consumer," Heise says. "If they're not sure about what to buy on any given day, it's probably a pretty safe bet that you're going to get a very good product if you buy something from the brewery that has the beer-of-the-year title." 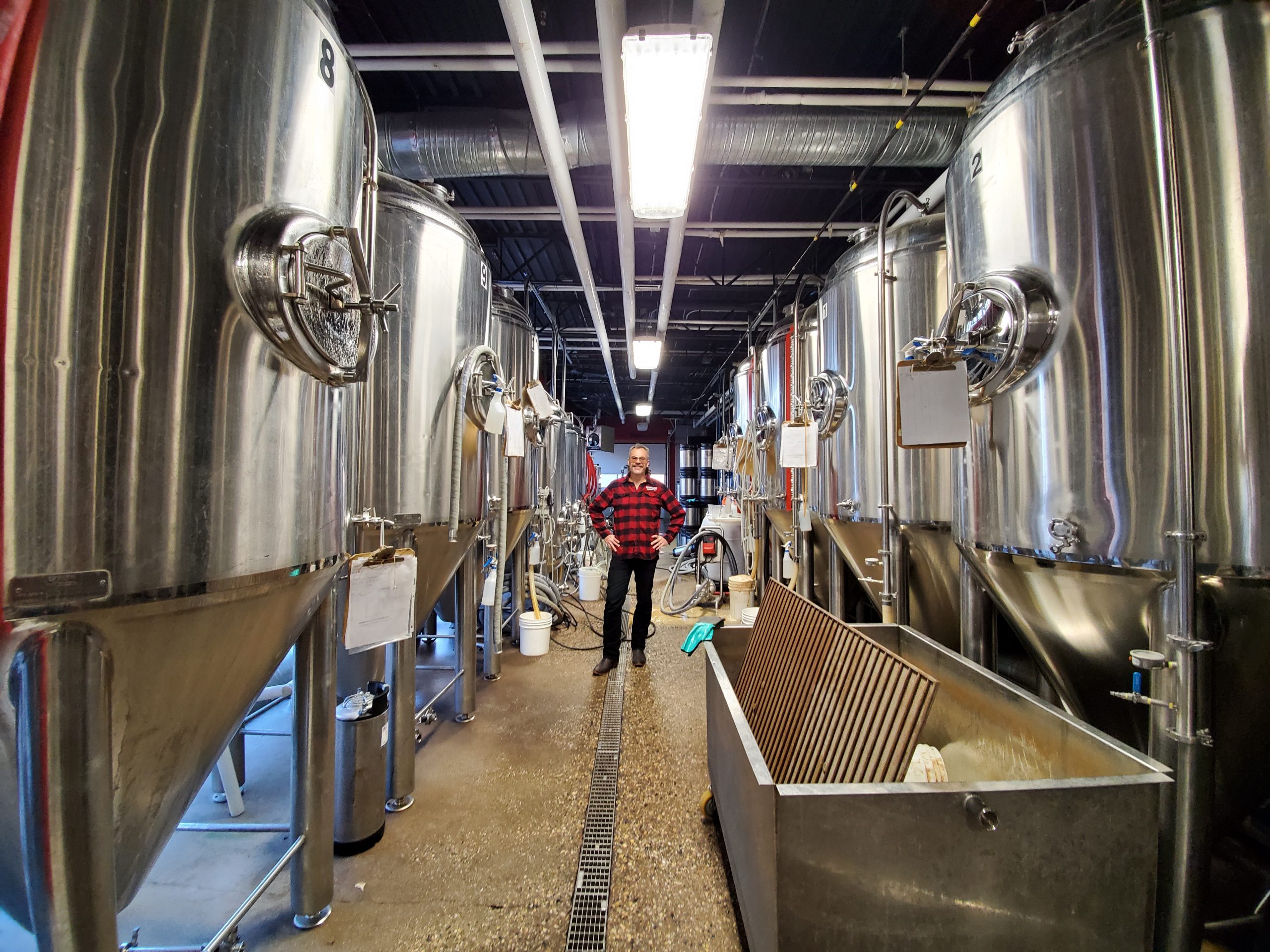 Heise is not the only U of R graduate that make up the award-winning Rebellion team. Matt Barton BA'06, BJ'08 is a journalism school graduate and is Rebellion's manager of communications. Vanessa Owen BA'08 and Zaul McLelllan BFA'11 are brew masters.

One of Saskatchewan's most popular breweries earned a distinction that has put it on the national craft beer brewer's map. Rebellion Brewing Company, a Regina-based brewery picked up three awards at this year's Canadian Brewing Awards; including their Cherry Lambic being named Beer-of-the-Year at the September competition. The beer, which was also deemed top beer in the Belgian-style sour ale category, bettered all others in a competition that featured thousands of beers in 56 different categories. Another Rebellion beer, Hoppy Pollinator, topped the list for honey/maple lagers or ales.

Heise graduated from the U of R with a business administration degree in 2000. He says his time at the University prepared him well for an entrepreneurial career.

"The business administration program was very valuable in terms of getting that foundational knowledge for business," he says. "I took as many accounting classes as I could. That has really helped me on the financial side. I also took a lot of economics classes. Just understanding economics theory and history of economics has helped me understand consumer psychology and how people make buying decisions."

Heise is not the only U of R graduate that make up the award-winning Rebellion team. Matt Barton BA'06, BJ'08 is a journalism school graduate and is Rebellion's manager of communications. Vanessa Owen BA'08 and Zaul McLellan BFA'11 are brew masters who played important roles in developing suds like Cherry Lambic and Beer, a simply named German-style Kölsch that's light and refreshing and Rebellion's top selling brand.

"Beer has a familiar flavour - a really good quality flavour," says Heise. "People love it. We launched it in the spring and it immediately became our best seller."

As for the future of Rebellion, Heise says that he wants to continue to capture more of the market share that is available in Saskatchewan.

"We just want keep putting out really great beers. We're really proud of our classic beers that do really good in the market. Although we sell a little beer in Alberta and Manitoba, we're really excited about selling more beer in Saskatchewan."