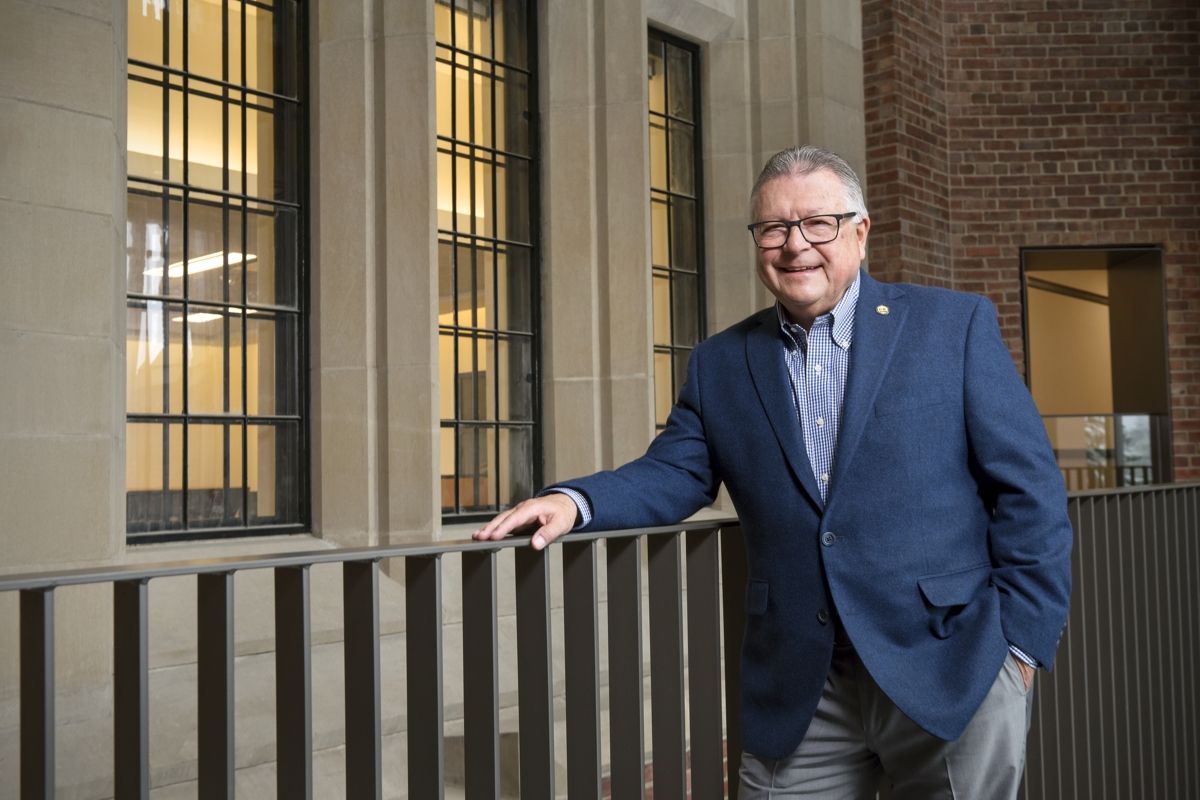 University of Regina alum and former Member of Parliament for Regina-Wascana, the Honourable Ralph Goodale BA’71, has been appointed as High Commissioner for Canada in the United Kingdom of Great Britain and Northern Ireland by Prime Minister Justin Trudeau.

In his new position, Goodale will provide strategic advice to the Prime Minister on areas of importance to people in Canada and the United Kingdom. This includes many current and ongoing challenges including the COVID-19 pandemic, climate change, pursuing post-Brexit trade, and creating job opportunities.

“Ralph Goodale’s decades of experience will continue to serve Canadians well in his new position as High Commissioner for Canada in the United Kingdom of Great Britain and Northern Ireland. As a trusted advisor in London, he will work to further strengthen the friendship between our two countries while we work together to tackle our greatest challenges, and continue to offer thoughtful and heartfelt advice on behalf of Canadians,” said Prime Minister Justin Trudeau in an announcement from the Office of the Prime Minister, this week.

"As one of the University of Regina's most distinguished alumni, Mr Goodale has served our province and country with integrity and distinction for nearly five decades," said University of Regina Interim President and Vice-Chancellor Thomas Chase. "There is no one more experienced or more qualified to represent Canada internationally, and on behalf of our entire University community, I wish him all the best in this important role."

Most recently, Goodale served in the federal Cabinet as Minister of Public Safety and Emergency Preparedness. He was also the lead on Canada’s response to Iran’s shooting down of Ukraine International Airlines Flight PS752 in a special advisory position to the Prime Minister.

It was a very interesting time at the University of Regina, it was the late 1960’s, and that was a turbulent era. There were lots of issues that were preoccupying young people. The University of Regina was a particularly vigorous and active campus – a new campus – back in those days, and I think that that experience solidified with me is that the political process is a good and worthy process. It is a valid way, an important way, to address issues and to accomplish objectives. People would have different opinions of course on whether politics is worth their while. It’s a rough and tumble process and it has some disconcerting aspects to it. Sometimes it’s not very respectful, sometimes it doesn’t seem to be very effective, it doesn’t motivate people or strike them in a way that you really want to invest your time and effort in order to change things and get things done.

With the professors that I had during that period of time, with the fellow students that I associated with from all different political perspectives – left, right, and centre – that experience really convinced me that politics was a worthwhile thing to get involved in. I had no idea at that time that I might be a political candidate myself, run for public office, and get elected. The idea of being involved in political work, it struck me as something I was be interested in, and it was worth a try to see if we could get some things done through the process. My experience at the U of R really solidified that it was indeed worthwhile.

Politics was always of interest to me, but I didn’t think that would be my full-time occupation. When I was quite a bit younger I was thinking about medicine. Around the time I was finishing high school and thinking about university, law became my principal objective.

I took a combined arts/law program at the U of R, at that time it was the University of Saskatchewan, Regina Campus, and then segued to the U of S. I was able to combine the arts degree with the law degree, so instead of five years I got it done in four. That’s really what I had in mind when I started at the University of Regina.

One other notion in the back of my mind was journalism. I spent my summers as a summer relief student at CBC Saskatchewan. So those were the three things – medicine a long time ago, then law and broadcasting were my principal points of attention while going to the U of R. Politics came along right after that and diverted me into a new direction.

It’s been an interesting journey and one that I had never anticipated that it might unfold the way that it has. As you take on new challenges and opportunities, it’s always really important to remember your foundations, remember your roots. Your family, your friends, the people you went to school with, the teachers, the mentors, the coaches. All of those people at a very basic community level, they shape your life. They give you the foundation upon which you can do other things and reach your objectives.

It’s been a fascinating journey, one that I have enjoyed every minute of. Even some of the rough and tumble minutes, when things haven’t gone the way that you would have hoped. There are always disappointments along the way.

I think that the critical thing is to stay grounded, stay well-rooted in the values and the principles that you grew up with. Always maintain that proper perspective on what your real objectives are and what are the things that are the most worthwhile. It all relates to being respectful of other people, and valuing what they contribute to your life story.

Number one is to maintain that interest. We live in a very open, inclusive, and democratic system. It depends on people taking an interest and participating to be a part of the process. Resist the temptation to be cynical. Resist the pressures where people may say that there are so many better things that you can do with your life. I understand that criticism, but stick with it. Stay interested and stay involved. Pick your goals and pick your objectives and work hard to achieve them. And don’t underestimate yourself! Make sure that you’re working hard, you’re maintaining your ideals. Dream big and be ambitious and you will be surprised at what you can accomplish at the end of the day.

There are two things that immediately come to mind. In this role you have the unique opportunity to represent all of Canada on the international stage. In this case, the United Kingdom, which is one of the largest Canadian diplomatic postings around the world. That is a tremendous honour. To have the privilege to be speaking for Canada in international organizations and forums. To be representing the country that we all love, that is a huge privilege.

The other is being a listening post to Canada and trying to absorb all of the perspectives that you hear from other governments, in my case the British government. From this vantage point you hear a tremendous amount of input from Europe and from the Middle East. Trying to make sense of all of that and then filtering all of that back to advise the Government of Canada. That’s a wonderful role to have. To represent your country in the international arena and then to gather international input and feed that back to people in Canada. This helps to ensure that Canada can make the greatest contribution to global affairs, but at the same time being, in its own right, diplomatically, politically, and economically effective and successful.

It’s a new role, I have never done this before. After 45 or 50 years of active political life, making that transfer from politics to diplomacy, I hope I can do that successfully. I am certainly looking forward to the challenge.

We at the University of Regina offer our sincere apologies for an egregious error in the printing of our Fall/Winter 2020 issue of Degrees, the University magazine.

In referring to a transgender person, we inadvertently used their birthname in lieu of the name that they use. This process is known by many in the 2SLGBTQ+ community as "using their deadname." We recognize that this is not only incredibly offensive, but is a violation of their privacy and identity, and carries psychological and emotional trauma for the victim. Though this error was unintentional, using a deadname in the magazine was, and is, inexcusable. For that, we are deeply sorry.

We are taking the following actions to help address this particular situation, including:

Members of the University's Executive Team, as well as University Advancement and Communications (UAC), the unit responsible for the production of Degrees magazine, have offered a sincere apology directly to the person we harmed. As an organization - and as people - we have committed to working with them and the UR Pride Centre for Sexuality and Gender Diversity to ensure that we take action to mitigate the hurt we have caused to them and the 2SLGBTQ+ community - a community that we value greatly.

Through meaningful conversation with the affected person and UR Pride, the University has come to understand that current policies and practices have inadvertently affected others, albeit in not as public a manner. We understand that while the person harmed by this mistake is known to us, many trans and non-binary students, faculty, and staff at the University experience acts of deadnaming and/or misgendering on a daily basis within our campus community. We would like to also offer an apology to all those trans and non-binary people, and their loved ones, who we have harmed in this way, without knowing.

As we move forward, the University is committed to continuing our training for staff through our Equity, Diversity and Inclusion (EDI) office and UR Pride to ensure that institutional communications are sensitive to the 2SLGBTQ+ community and inclusive in nature. Additionally, a review of processes related to individual naming policies will be undertaken to find ways to better manage situations involving naming in the future.

The University is inviting those in the 2SLGBTQ+ community to work with us so that to the degree it is possible we can atone for damage we have caused in the past, and implement ideas for creating a more inclusive campus. To share ideas, please contact us at ask.us@uregina.ca or through UR Pride at uofr.consultation@urpride.ca.

The University is also offering sponsorship of UR Pride's GSA Outreach program, which helps to educate youth and their teachers in Regina schools about 2SLGBTQ+ inclusion.

The University has identified well-being and belonging as a priority within its most recent Strategic Plan, with a commitment to EDI as a major institutional goal. Creation of an EDI Action Plan is underway to promote and help build an inclusive organizational culture that integrates EDI considerations into teaching, research, and learning.

We recognize that this long-overdue work is just beginning, and that we have far to go to cultivate an inclusive environment - one that is stronger as a result of diverse perspectives. Together, we will move forward in creating a more positive, inclusive, University of Regina that fulfills our Strategic Plan's vision to "reflect the world in which we want to live."

The COVID-19 pandemic put a sudden halt to many special events in the past 16 months. That's true of the awarding of University of Regina honorary degrees that are usually presented at Spring and Fall Convocation ceremonies. The last time the University presented its most prestigious awards was in the Fall of 2019. Thankfully, that has changed. This Spring's honorary degree recipients include one of the world's most decorated masters track and field athletes, a respected academic and a tireless Indigenous advocate.