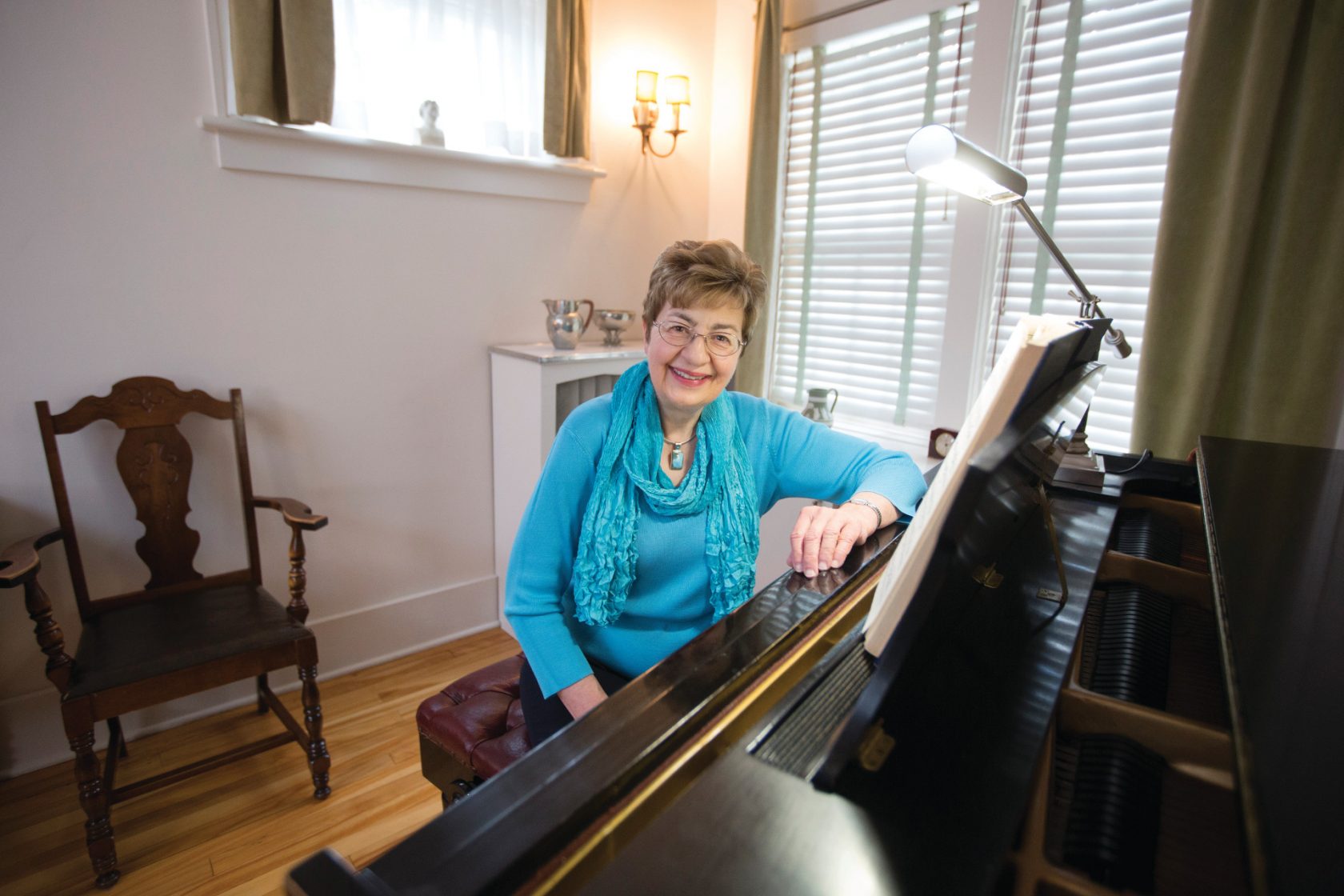 From the age of nine, Joan Halmo played the organ in church in her hometown of Kuroki, Saskatchewan. It clearly instilled in her a love of music – including church music in all its rich variety – as well as a devotion to education, built heritage, and musical and cultural activities in her community and beyond.

Halmo is currently the executive and artistic director of Gustin House, a historic residence and studio space in Saskatoon named after Dr. Lyell Gustin, who taught piano to countless students – including Halmo – for almost 70 years. Under Gustin’s mentorship, Halmo attained a Licentiate in Piano Performance from Trinity College London.

Halmo was invited to join the non-profit Gustin/Trounce Heritage Committee that had been established after Gustin’s death to preserve his artistic legacy and follow his example of advocacy for music and the fine arts. During 2004-05, Halmo led the committee’s work in completely restoring the former home and studio, which was designated a Provincial Heritage Property in 2008. She also spearheaded the initiative to stabilize Trounce House, a small residence situated on the same city lot as Gustin House. Built in 1883, it is Saskatoon’s oldest surviving building.

In addition to physical restoration projects, since 2005 Halmo and her colleagues have re-established Gustin traditions of musical programming, including a series of three concerts featuring performers from national and international stages and a series of smaller-scale interdisciplinary programs held at Gustin House.

“Built heritage is a witness to our shared history as a city, a community, a province and a nation,” she says. “We need built heritage as a physical reminder of our origins, our stories, and the direction that the future can take. There is a kind of magic in that Dr. Gustin’s last teaching piano continues to send music throughout the house, as it has for so many years.”

“ I am humbled by being selected, by being in the company of other awardees who are greatly accomplished and greatly deserving, ”

Gregory Schulte, an organist and part of the seven-member Heritage Committee for 12 years, affirms that Halmo is the right person to lead the way in continuing the Gustin legacy. “She has the cultural foundation – including her education – that has given her an understanding that is deep and unshaken in her view that the arts should be contributing to society,” Schulte states. “She understood why it was important to preserve Gustin House for the benefit of the whole community.”

She received a City of Saskatoon volunteer award for heritage in 2012, and a Campion College alumni award in 2015.

“ I am humbled by being selected, by being in the company of other awardees who are greatly accomplished and greatly deserving, ” she says. “Given this marvelous honour, I hope to go forward worthily as an alumna of this fine university that gave me so much.”

Greg Kratzig had a bold goal in mind when he decided to leave behind a successful career in retail management and return to school. His goal was to study psychology and, as it turned out, he earned his honours bachelor’s degree, master’s and PhD – all at the University of Regina.

Dr. Margaret Dagenais was surprised to learn she would receive the Dr. Robert and Norman Ferguson Crowning Achievement Award from the University of Regina Alumni Association (URAA) as recognition for what she describes as “… an 11-year experiential learning opportunity.”

Greg Kratzig had a bold goal in mind when he decided to leave behind a successful career in retail management and return to school. His goal was to study psychology and, as it turned out, he earned his honours bachelor’s degree, master’s and PhD – all at the University of Regina. “When I began my studies, I had an interest in child psychology,” Kratzig notes, “but by the end of my undergrad degree, my focus had shifted to adults and how we make decisions. I also knew that the clinical route was not for me; my interest was in applied research and experimentation.” In his master’s work, Kratzig explored whether aging affects our decision-making processes. While he was working on his doctoral degree, “the stars aligned” as he puts it: the RCMP were looking to hire a researcher to enhance cadet training and policing practices. His experience and research interests ticked all of the boxes in the job description and he became the first in-house researcher hired by the force. In his position as a training, innovation and research analyst, Kratzig designed and developed a comprehensive research program and a sophisticated simulation lab at the RCMP Training Academy that attracts interest from academic researchers and police agencies nationally and internationally. Over the past seven years, he has initiated and led research projects in areas such as firearms training, emergency vehicle driver training, use-of-force decision-making, forensic interviewing, anti-terrorism programs, and officer health and well-being.

“ This is the biggest award I’ve ever received. It was not ever within my thoughts, ”

As the mental health champion for Depot Division, he is part of a research team in a large-scale project investigating post-traumatic stress disorder that will periodically test a select group of police officers over a 10-year period. The firearms training simulator he developed has been adopted by the U.S. Federal Law Enforcement Training Center (which handles 70,000 trainees annually) and by the police force in Singapore. His paper on the topic, in collaboration with other researchers, is his most cited. “There is a huge gap in the area of policing-related science,” he says. “Much of the work done here has never been done before.” For all of his research projects in the lab, Kratzig draws from a broad network of colleagues, although he particularly seeks out students, faculty and staff from the University of Regina. His research into decision-making, for example, involves faculty from the Department of Psychology and from the Faculty of Kinesiology and Health Studies. He is in the early stages of developing a virtual reality area within the simulation lab, in collaboration with faculty and staff from the Faculty of Media, Art, and Performance. When he is asked for his thoughts about being selected for the achievement award, Kratzig admits he didn’t know what to say when he received the phone call. He relates it to a psychological concept he and his fellow grad students felt – the Imposter Syndrome – where they weren’t sure they were smart enough to be there. “ This is the biggest award I’ve ever received. It was not ever within my thoughts, ” he says. “There are a lot of great people out there doing outstanding work. To have my work recognized by my peers in this way is overwhelming.” [post_title] => Dr. Greg Kratzig [post_excerpt] => Greg Kratzig had a bold goal in mind when he decided to leave behind a successful career in retail management and return to school. His goal was to study psychology and, as it turned out, he earned his honours bachelor’s degree, master’s and PhD – all at the University of Regina. [post_status] => publish [comment_status] => open [ping_status] => open [post_password] => [post_name] => greg-kratzig [to_ping] => [pinged] => [post_modified] => 2018-05-15 11:53:39 [post_modified_gmt] => 2018-05-15 17:53:39 [post_content_filtered] => [post_parent] => 0 [guid] => http://vm-uor-degrees/?p=406 [menu_order] => 0 [post_type] => post [post_mime_type] => [comment_count] => 0 [filter] => raw ) WP_Post Object ( [ID] => 412 [post_author] => 1 [post_date] => 2018-02-06 16:50:17 [post_date_gmt] => 2018-02-06 22:50:17 [post_content] =>

Dr. Margaret Dagenais was surprised to learn she would receive the Dr. Robert and Norman Ferguson Crowning Achievement Award from the University of Regina Alumni Association (URAA) as recognition for what she describes as “… an 11-year experiential learning opportunity.” Dagenais was referring to the 11 years she devoted to the board of the Alumni Association, but the award recognizes much more than that: it acknowledges her years of service to the University of Regina, as well as to the URAA.

Dagenais, who is currently a program development consultant at Saskatchewan Polytechnic based in Regina, recalls that her involvement with the Alumni Association came about after she had served on the SIAST (as Sask Polytechnic was then known) Board of Directors.

“I was looking for a rewarding experience and opportunities to use some of the skills I’d developed on the SIAST Board, so I applied to the PhD program (in Educational Psychology) at the University of Regina and responded to the call for URAA board members, hoping I would be accepted to one or the other,” she explains. (She was accepted into both, and received her doctorate in 2011.)

Her contributions to the University include reviewing research proposals as a member of the Research Ethics Board of Directors, developing and facilitating a workshop in curriculum redevelopment for international scholars, and serving two terms on the University Senate.

During her time on the Alumni Association board from 2005 to 2016, she helped develop a more sustainable investment strategy to support funding for scholarships, helped move the association away from reliance on hands-on fundraisers toward revenue-generating affinity partnerships, revitalized the faculty recognition program and secured a more profitable arrangement with the supplier of degree frames.

Making the Association’s Faculty Awards for Excellence program more accessible was particularly important to Dagenais. The Association also raised its profile on campus by branching out into new areas, and sponsoring lectures, conferences and on-campus events like Welcome Week, Slam Dunk and Winter Carnival.

Gwen Keith, CEO of the Holy Family School Division, was chair of the URAA Board when Dagenais revamped the awards program. “She was brilliant in giving attention to every detail that would lean out and fairly execute the awards process,” Keith observes. “She also was always willing to volunteer to create contacts and educate the board on the features of potential partnerships. I hold her in high regard for the personal teamwork she offered to me through some challenging and complex work on behalf of the URAA.”

Dagenais continues to support the mission of the University and the Alumni Association by attending and assisting at events. She is particularly proud that, in 2016, the URAA moved to include graduates of the University’s Campus for All program as alumni. The program sees students with intellectual challenges taking University courses and earning a certificate in Inclusive Post-Secondary Education in the process.

She values the University of Regina because it offers “… a post-secondary learning opportunity right here in southern Saskatchewan. It attracts a diverse group of intellectuals and thinkers to Regina who contribute to the greater community, attracts students from all over the world, and is also a major supporter of the arts and cultural industries.”