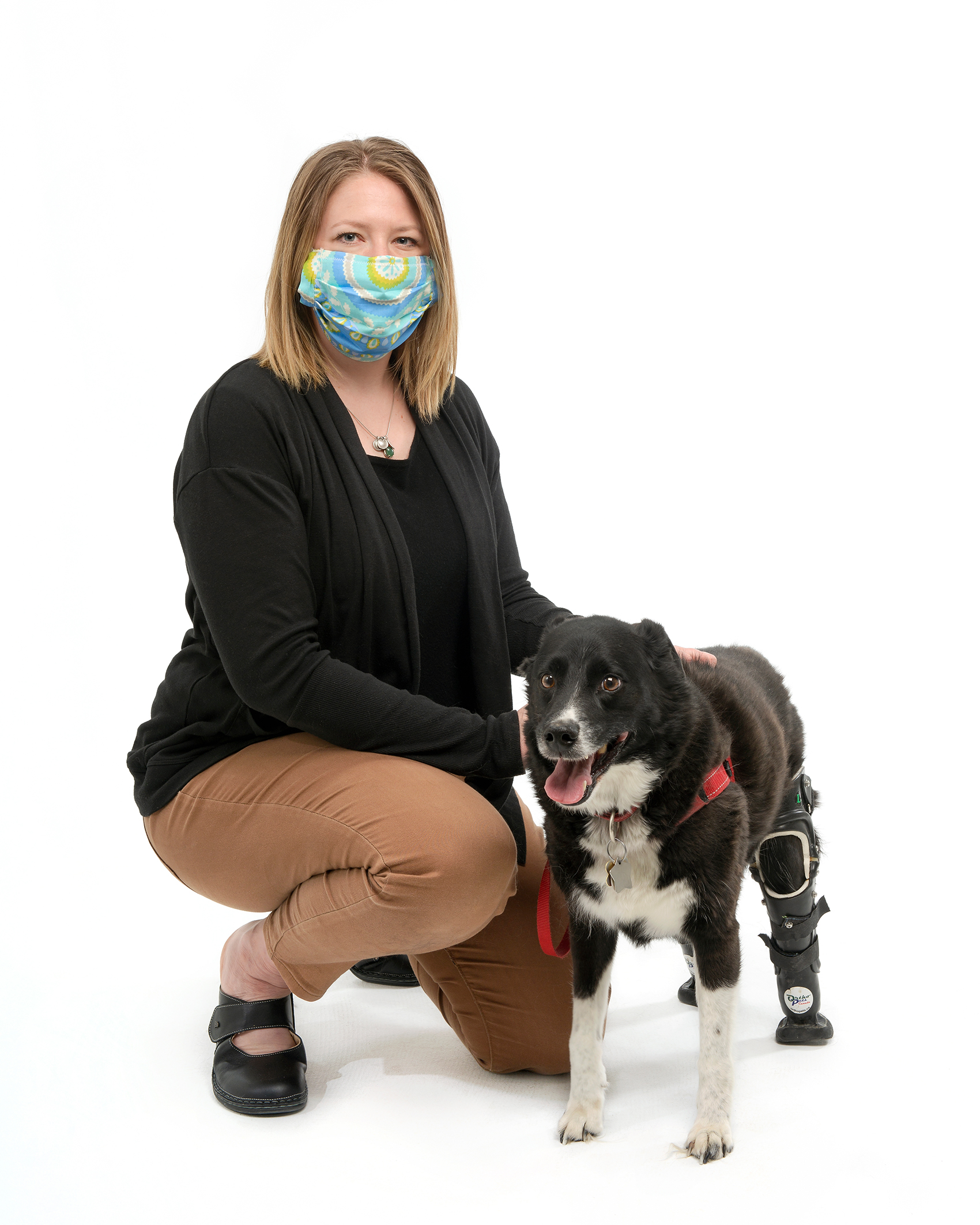 Tara Hudye BSc’00 grew up on the family farm near Kamsack, Saskatchewan and earned a Bachelor of Science at the University of Regina in 2000. She graduated from the University of Saskatchewan’s Western College of Veterinary Medicine in 2004. Hudye and her colleagues operate Regina’s Veterinary Mobility Centre, a full-service animal clinic that specializes in pain control in family pets. In 2019, she received the Saskatchewan Association of Veterinary Technologists Veterinarian of the Year Award and, in 2018 and 2020, she served as a volunteer veterinarian at the Canadian Challenge Sled Dog Race. Hudye is pictured here with Hector, the prostheses-legged dog.

What first sparked your interest in animals?
I grew up on a farm with livestock and working cattle dogs. I took a keen interest as a kid training the dogs basic obedience and the love of animals grew from there.
What kind of pets do you have at home?
We currently have two cats and two dogs. We have had various pets in our house in the past, including geckos, hamsters, fish and guinea pigs.
What makes your clinic unique?
At the start of my veterinary career, I was astounded by the number of pets that had chronic pain. The most common was due to arthritis and all the compensatory mechanisms that go with it. I became increasingly frustrated with pain management limitations to joint supplements and medications. I wanted to learn more about pain, lameness and other therapies that would improve quality of life. Approximately halfway through my career, I became certified in canine physical rehabilitation and have since amalgamated both veterinary medicine and physical rehabilitation into my practice.
What did it mean to you to receive the 2019 Saskatchewan Association of Veterinary Technologists Veterinarian of the Year Award?
I was humbled and honoured to receive this award. The effort, hard work and dedication of myself and many other people, including talented veterinary technicians, have made this possible. We had a dream and together we achieved it.
What do pets bring to people’s lives?
Pets are an extension of our lives and families. Their impact on our well-being cannot be measured or quantified, nor can I put into words just how important and essential they are to some.
What did you take away from your experience at the University of Regina?
Graduating from the University of Regina in 2000 paved the way to the rest of my life. I continue to stay in contact with many former classmates; it is strange to think that was 20 years ago. I marvel at the changes that have occurred at the University since then.
What is the most unusual pet you have treated?
I feel that I cannot single out one pet in particular since I have had the opportunity to be involved with so many different pets. Over the past 16 years, I have treated the typical dog, cat, guinea pig, and livestock animals. I have also dealt with snakes, tegu lizards, rats, deer, coyotes, owls, ducks, and bats – to name a few.
What’s the most satisfying aspect to your job?
I love that every day is different – different pets, different health issues, and accompanying challenges that go along with it. I think the underlying factor that keeps me doing what I do is an inherent desire to help heal and alleviate pain for animals that cannot help themselves.

Marah Mattison had a unique internship opportunity this past semester. Through a Faculty of Arts internship at the Royal Saskatchewan Museum she realized a dream – to curate a museum exhibition. Unfortunately, due to COVID-19, the exhibit has yet to be unveiled. By completing the curating project, Mattison became the first University of Regina history student to earn an honours degree by completing a hands-on project rather than writing a paper. No doubt that also helped her gain acceptance into the Heritage Studies and Public History program at the University of Minnesota – the first Canadian to do so.

In an April 1, 2020 announcement, Thomas Chase BA(Hons)’79 was officially named the University of Regina’s interim president. Chase has a nearly 40-year relationship with the University, beginning as a student. He earned a Bachelor of Arts (High Honours) in English in 1979. In 1984, he earned a PhD from Glasgow University in Scotland, where he held a doctoral fellowship in the Department of English Language. He has served in various academic and administrative positions at the University of Regina, including coordinator of the Linguistics Program, founding director of the Centre for Academic Technologies, associate dean (Research and Graduate) of the Faculty of Arts and, for four years, dean of the Faculty of Arts. Most recently, he served as provost and vice-president (Academic), having been appointed on July 1, 2011.