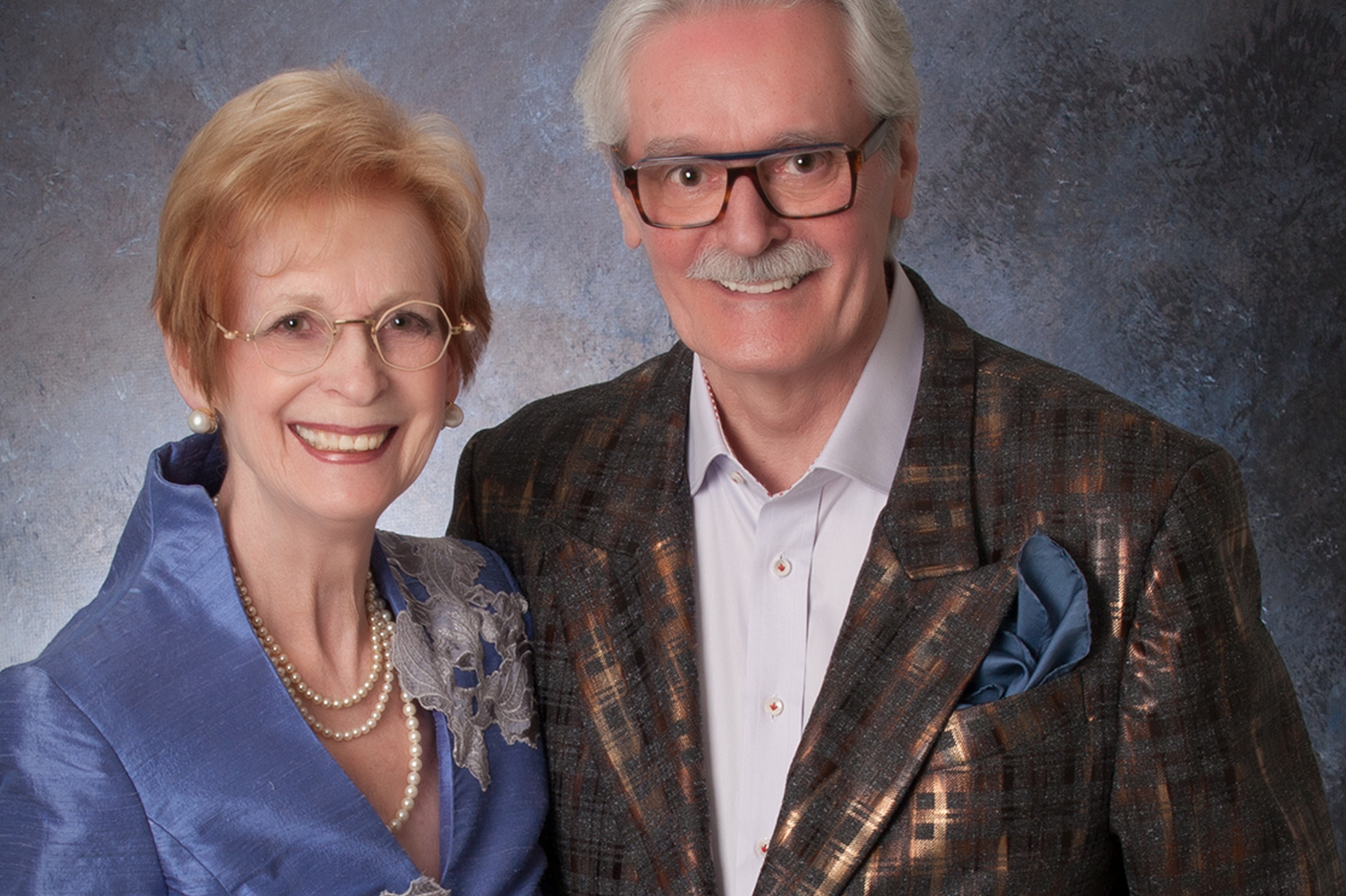 Roberta McKay and Elmer Brenner are enthusiastic, longstanding supporters of the University of Regina, in particular, the well-being of the University’s historic College Avenue campus. Whether it’s by good fortune or good planning, they live and work where they can watch the current renewal of Darke Hall and the College Building taking place just up the street.

McKay and Brenner both have deep attachments to the place. McKay grew up in Regina, and recalls taking piano lessons in the basement of Darke Hall, followed by end-of-season recitals on stage in front of family and friends. Brenner’s connections include Arts Education and Theatre classes, and a short time on the University Senate as a representative of library trustees. “I gained a greater understanding the institution’s overall operation and a deeper appreciation of its importance to the entire community,” he says.

McKay and Brenner may be best known for their support for College Avenue renewal, but their philanthropy touches the lives of many people in the community, particularly in areas such as the arts and health.

The couple served on the committee that developed plans to renew the historic campus, and in 2012, inspired by plans to revitalize Darke Hall and the Conservatory of Performing Arts, donated $250,000 toward the Building Knowledge project. Two years later they donated a piano for use in Darke Hall, but not just any piano. McKay and Brenner traveled to Italy, where – with the help of classical pianist Angela Hewitt, who once played in Darke Hall – they selected a world-class Fazioli piano that matches the acoustic properties of the performance space.

“It was donated to be in Darke Hall,” McKay explains, “although it is temporarily stored on the main campus while construction is underway.” Brenner adds, “Our intent was that it be in Darke Hall and available for student use; we want students to experience what it is like to play a high-calibre piano.”

McKay, a dermatologist, and Brenner, a designer and visual artist, may be best known for their support for College Avenue renewal, but their philanthropy touches the lives of many people in the community, particularly in areas such as the arts and health. They sponsor free Regina Symphony Orchestra programs at local libraries, the Regina Music Festival Association, and the annual Saskatchewan Fashion Forward Designer Award. The couple also founded the Saskatchewan Health Care Excellence Awards, which for ten years recognized the achievements of outstanding health care workers. Both have received a number of individual awards over the years. Among them, the City of Regina named Brenner volunteer of the year in 1978-79, and CTV Regina selected McKay as citizen of the year in 2007.

McKay says she was “certainly surprised” to receive the call from University of Regina president Vianne Timmons with the news that the couple were to receive an honorary degree. Both state they are pleased and honoured to be recognized by an institution that has shown an unwavering commitment to preserving an important part of Regina’s built heritage, and to revitalize Darke Hall as a community performance centre.

McKay and Brenner will receive their honorary degrees at Convocation on June 7.

What do former Prime Minister Lester Bowles Pearson, actor John R. Vernon (dean Wormer in the frat house comedy Animal House), singer Buffy Sainte-Marie and hockey great Gordie Howe have in common? They have all been bestowed the highest honour the University can confer – an honorary degree. Here are the most recent recipients.

WP_Post Object ( [ID] => 1100 [post_author] => 1 [post_date] => 2018-05-09 10:33:44 [post_date_gmt] => 2018-05-09 16:33:44 [post_content] => [post_title] => Spring 2018 honorary degree recipients [post_excerpt] => What do former Prime Minister Lester Bowles Pearson, actor John R. Vernon (dean Wormer in the frat house comedy Animal House), singer Buffy Sainte-Marie and hockey great Gordie Howe have in common? They have all been bestowed the highest honour the University can confer – an honorary degree. Here are the most recent recipients. [post_status] => publish [comment_status] => open [ping_status] => open [post_password] => [post_name] => spring-2018-honorary-degree-recipients [to_ping] => [pinged] => [post_modified] => 2018-06-01 15:08:38 [post_modified_gmt] => 2018-06-01 21:08:38 [post_content_filtered] => [post_parent] => 0 [guid] => https://www.degreesmagazine.ca/?p=1100 [menu_order] => 0 [post_type] => post [post_mime_type] => [comment_count] => 0 [filter] => raw ) WP_Post Object ( [ID] => 1108 [post_author] => 1 [post_date] => 2018-05-09 10:43:05 [post_date_gmt] => 2018-05-09 16:43:05 [post_content] => When Sheldon Kennedy learned that the University of Regina was to recognize him with an honorary degree, he grasped it as another opportunity to raise awareness about the societal issues that have become his life’s work: the prevention of child abuse, bullying and harassment. “I don’t do this work for the recognition,” he says, “but to be a representative on these issues, so that people learn how to spot abuse and take action.” Kennedy played junior hockey for the Swift Current Broncos of the Western Hockey League, helping the team win the Memorial Cup in 1989, and then professional hockey for ten seasons. (In the WHL, he played against another honorary degree recipient, Brad Hornung. They had earlier been teammates on Team West, representing western Canada in an under-17 international tournament.) Kennedy’s determined advocacy for abuse prevention originates from his own harrowing experience with the Broncos. He revealed in 1996 that he had been sexually abused by his coach. Understanding that some people in the community had a “gut feeling” that something was wrong, but were unsure how to act on their suspicions, he wanted to prevent similar situations in the future. After brainstorming with Hockey Canada president and CEO Bob Nicholson and NHL Players Association vice-president Lanny McDonald, they determined it was necessary to “educate and empower the bystander.” 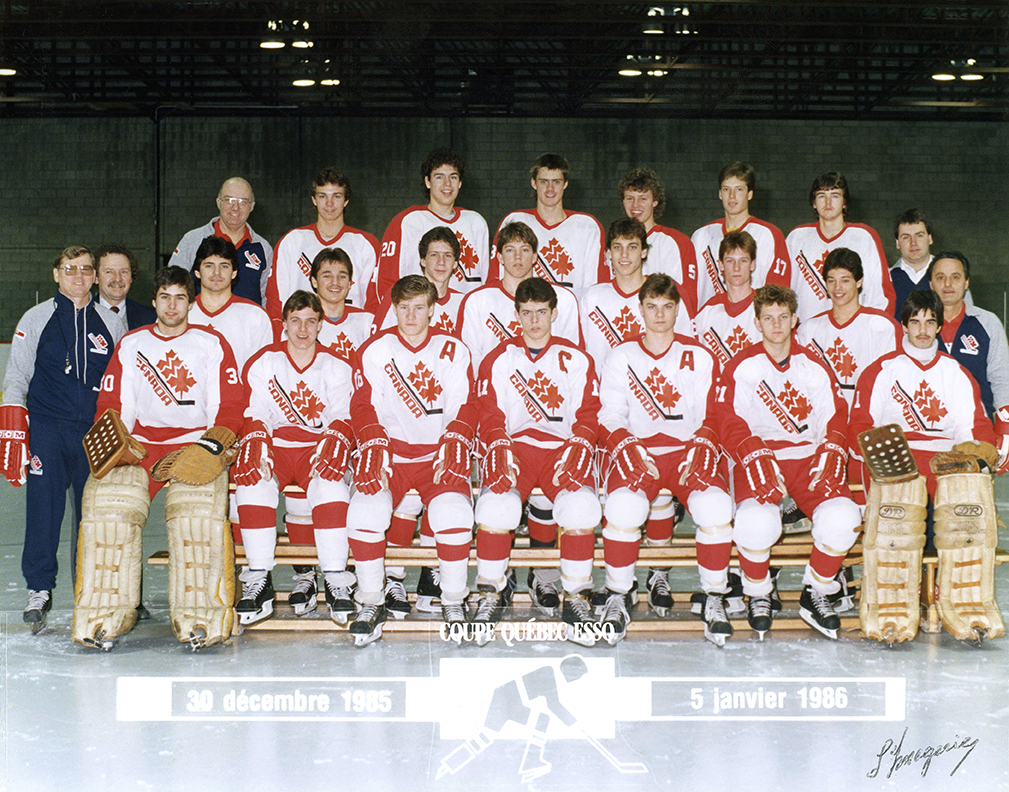 Fellow honorary degree recipient Brad Hornung (front row, wearing "C") and Kennedy (immediately behind Hornung) were teammates and roommates on a mid-80s team. Photo courtesy of Brad Hornung. To that end, in 1998, Kennedy roller-bladed across Canada, raising $1.2 million to support the violence, bullying and abuse prevention programming delivered by the Canadian Red Cross. He and business partner Wayne McNeil later founded the Calgary-based Respect Group, which delivers online training programs aimed at preventing bullying, abuse, harassment and discrimination in sports, education and the workplace. Kennedy notes proudly that more than one million individuals – coaches, parents, teachers, administrators, managers and others – have completed one of the three programs, and are now Respect certified.

“I don’t do this work for the recognition,” he says, “but to be a representative on these issues, so that people learn how to spot abuse and take action.”

Kennedy’s story, and his advocacy work, have drawn plenty of attention and recognition. A television movie about his life aired on CTV in 1999, and a video documentary about his life, Swift Current, premiered in 2016 when he was inducted into the Broncos’ Hall of Fame. In 2013' the Calgary Child Advocacy Centre was renamed the Sheldon Kennedy Child Advocacy Centre, where he is the lead director. The Centre employs 120 police, health, education, justice, and child and family service professionals who work together to assess, treat and seek justice for physically and sexually abused children. “The Centre has changed the way we provide services to children and their families,” he says. For his courage in raising awareness about childhood sexual abuse and its prevention, Kennedy has received several leadership awards, as well as honorary degrees from the University of Calgary and the University of the Fraser Valley. He is a member of the Alberta Order of Excellence and a recipient of the David Foster Humanitarian Award. In 2015, he was named a Member of the Order of Canada for his commitment to abuse prevention and support for young victims of abuse. Kennedy will receive his honorary degree on June 6. [post_title] => Sheldon Kennedy [post_excerpt] => [post_status] => publish [comment_status] => open [ping_status] => open [post_password] => [post_name] => sheldon-kennedy [to_ping] => [pinged] => [post_modified] => 2018-06-01 14:49:27 [post_modified_gmt] => 2018-06-01 20:49:27 [post_content_filtered] => [post_parent] => 0 [guid] => https://www.degreesmagazine.ca/?p=1108 [menu_order] => 0 [post_type] => post [post_mime_type] => [comment_count] => 0 [filter] => raw )