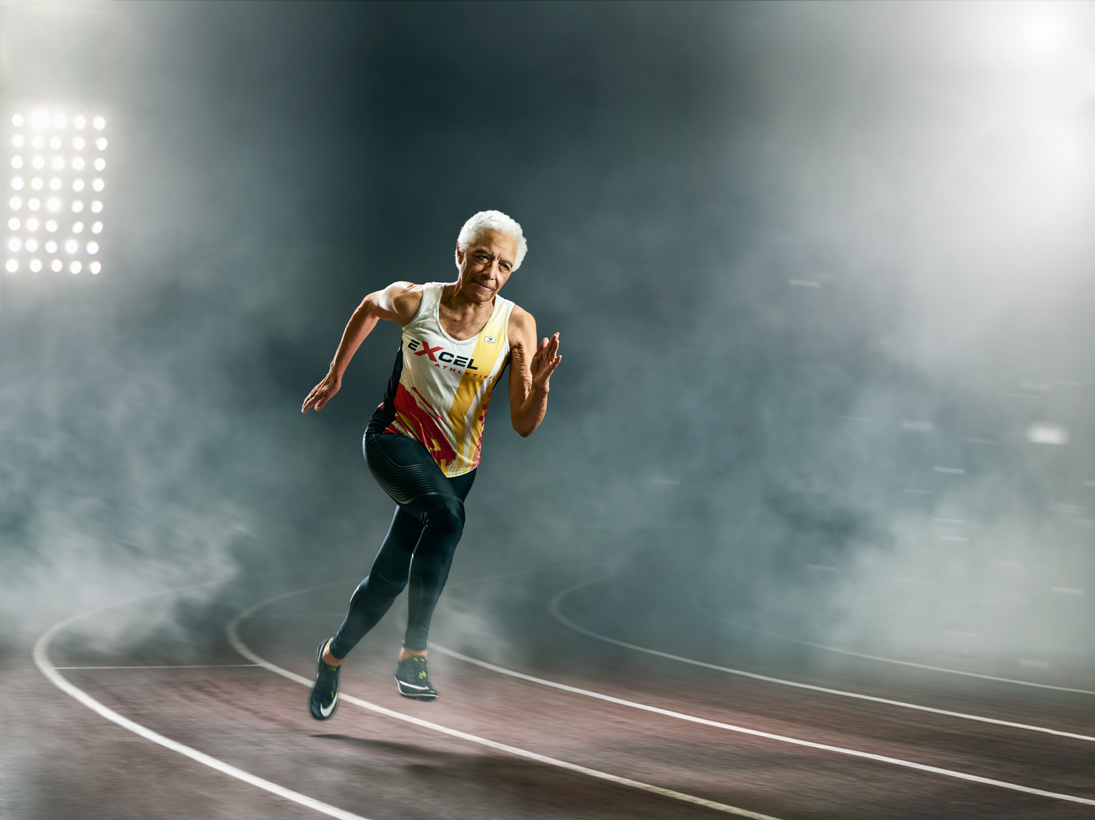 Running down a dream

Carol LaFayette-Boyd has enjoyed the heights of individual accomplishment. She has also known the depths of personal tragedy. She takes both in stride. In fact, it’s her strides that have made her a global track and field legend. Last year, for instance, after several gold medals and world records, the 76-year-old was named Female Athlete of the Year by World Masters Athletics.

LaFayette-Boyd takes a swig of water – something she always has on hand – gestures out a window toward Ruth Buck Park in Regina’s Normanview West neighbourhood and recalls how it all began. She and her husband Lem were trying to keep fit. They’d head out to the park and try to run a mile. In those days, she could never have imagined she’d be a world class sprinter.

“Old people running track and field – I couldn’t believe it,” she says.

In 1992, she heard the Canadian Masters Games were coming to Regina.

“Old people running track and field – I couldn’t believe it,” she says.

With nothing to lose, she signed up for two races. It was raining the first day but she ran like mad in lane two, passing two contenders on the curve to win the 200 metres.

“I grew up on a farm and knew how to run in the rain,” she smirks.

Her family’s cheering from the stands helped propel her to the finish line. The next day she returned for her second race with swollen ankles. During the race she could feel the Canadian record holder on her arm as they neared the finish but LaFayette-Boyd prevailed and clinched the Canadian 100-metre title.

It marked the beginning of a victory-filled career.

Carol LaFayette-Boyd was named the 2018 Female Athlete of the Year by World Masters Athletics.

She holds the world record in the indoor 200 metres, three Canadian outdoor age-group records in the 4x100 metres, 4x400 metres and 4x800 metres relays, and two in the indoor 4x200 metres relay. In 2018, she broke world indoor records in the 60 metres, long jump and triple jump, and also set a world outdoor mark in the 100m. Last year at the World Masters Athletics Championships in Malaga, Spain, she won five gold medals and set world records in her age group in the 200 metres and high jump. As a result she was named the 2018 Female Athlete of the Year by World Masters Athletics.

“She takes everything in stride and she smiles through it,” says Selina Coward BEd’77, LaFayette-Boyd’s long-time training partner.

At first, Coward doubted the grey-haired LaFayette-Boyd and the decision of the coach who put the tandem together. She didn’t want to be teamed with an old lady. Coward had grey hair too, but she was 12 years younger and, by her own regard, a whippersnapper compared to LaFayette-Boyd. Besides, Coward was one of the few Masters athletes in the Regina area. She had few rivals and boasted her own list of records.

LaFayette-Boyd didn’t waste any time crushing Coward’s assumptions. Since then, the two have run side by side. “It's rare to have a training partner like that. It’s exceptional,” Coward says. It wasn’t long before heartaches and triumphs on and off the track blossomed into a strong comradeship. “We're joined at the hip now,” says Coward. 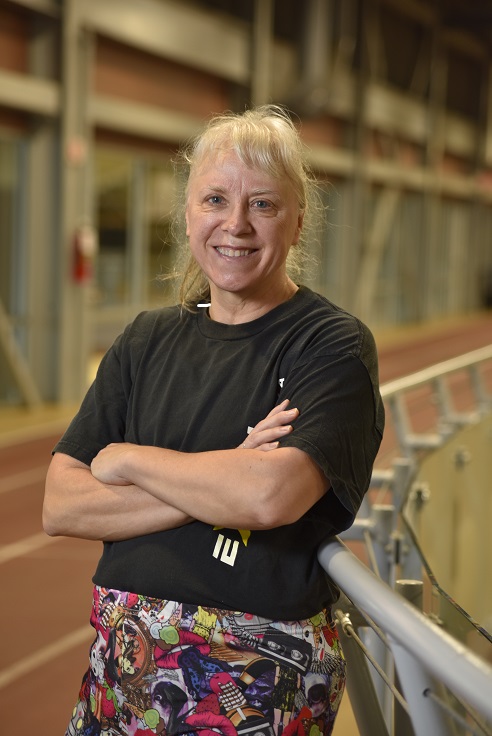 “We're fierce competitors on the track, but if I beat her tomorrow she would hug me the same as if she beat me today,” says Coward. 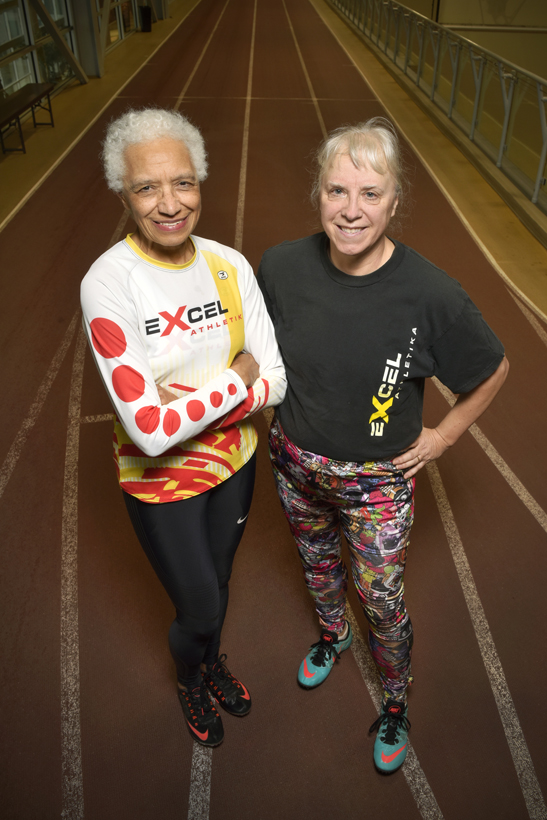 LaFayette-Boyd and Coward photographed on the University of Regina track. (Photo by Trevor Hopkin)

They spend at least three days each week together, 10 months of the year. Coward still marvels at LaFayette-Boyd’s character – never hesitating to loan her shotput shoes to a stranger or lend a shoulder to Coward, whose husband is suffering complications from a stroke.

“We're fierce competitors on the track, but if I beat her tomorrow she would hug me the same as if she beat me today,” says Coward.

LaFayette-Boyd grew up on a farm near McGee, Saskatchewan with seven siblings. Her job was to pick weeds and gather eggs. There was no running water. She attended a one-room schoolhouse named Oskaloosa, like her grandad’s hometown in Iowa. He came to Saskatchewan in 1906.

The LaFayettes were the only African-Canadian family in the area. She says that’s just how it was, and doesn’t recall overt experiences of racism. However, there are moments that linger in her mind, like being the only one not invited to a birthday party. She learned early to ignore cruel words.

“You can’t harass me because I’ll just dismiss you,” she says.

The family lived in Rosetown for a short time, then moved to Regina in 1956 after LaFayette-Boyd’s mother died of cancer. Unbeknownst to her at the time, her new Grade 9 teacher warned classmates to be nice to her – she was the only black girl at school. LaFayette-Boyd experienced more overt racism in the U.S. when she lived there with her first husband Lester Dodd, who served in the Air Force. Even the African-Americans treated her like an “other.”

LaFayette-Boyd is constantly on the move but she’s never been too busy for others. That was always evident throughout her decades-long social work career. Her unconventional approach made her unforgettable and as much of a star in the social work realm as she is today on the track or in the field.

She served hundreds of children during her 33 years as a social worker, supervisor and trainer; some 200 families as a financial worker; 40 as a family services worker; and 12 in the Special Foster Home Program.

Unfortunately, in her line of work, she saw countless broken families caught up in cycles of abuse, neglect and addiction. Forever the optimist, LaFayette-Boyd felt it was most important to keep families together.

LaFayette-Boyd not only visited families in their homes, but also spent time working in institutions. She worked as a psychiatric nurse at the Weyburn Hospital. As a social worker, she covered for striking workers at Saskatoon’s youth detention facility. The youth at the facility loved her, but it was an unimaginable experience with boys peeing from the rafters and girls cutting themselves. They’d plead for her: “Kokom LaFayette-Boyd, come. We’re dying, we’re dying.”

Starting in 1996 she began working at Regina’s Paul Dojack Youth Centre, a facility that serves at-risk young people. LaFayette-Boyd left her mark on Dojack as it did on her. While at Dojack, she preached dignity and respect, bragged about doing more pushups than the youth, and found little need for the “WRAP”, a control device with a shoulder harness, ankle bindings and leg restraints used to subdue residents. 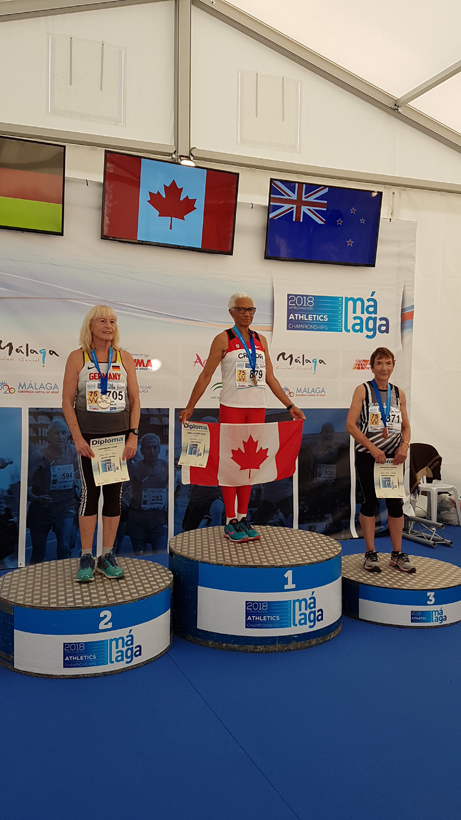 LaFayette-Boyd stands atop the podium during the 2018 World Masters Athletics Championships in Malaga, Spain. (Photo courtesy of Carol LaFayette-Boyd) 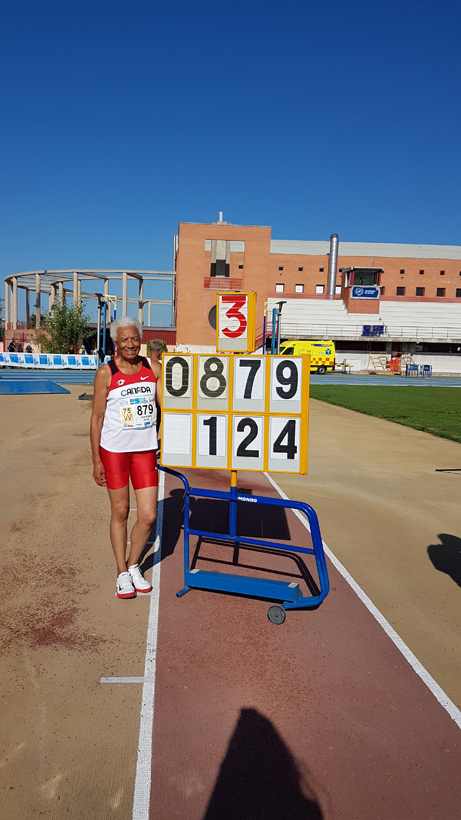 LaFayette-Boyd is competitive. And while she doesn’t like to lose, she’s not defeated by loss. Afterall, she’s seen more than her share of it in her life.

Cruel twists of fate decimated LaFayette-Boyd’s immediate family. Her daughter Jackie died of cancer in 2013. LaFayette-Boyd believed her daughter was in the clear but her husband’s words haunt her to this day: “She’s gone.”

Then it got worse. The next year LaFayette-Boyd lost her son.

She dealt with the anguish of losing two children with the help of God and her husband Lem. She didn’t know she was about to lose him, too.

Lem was also a social worker. They were comfortable together and married in 1984. He fell ill in 2015. A first doctor gave him iron pills. A second doctor gave him the truth: the growths on his lungs could be treated; the pancreatic cancer was terminal.

“Okay doc, how many years have I got?” Lem asked. “Weeks to months,” was the response. Thirty-three days later he died.

LaFayette-Boyd was able to move on and today, in her typical optimistic way, finds a cheery viewpoint. “They’re [her passed family members] up there, cheering me on,” she says.

LaFayette-Boyd starts her day in bed reading Psalm 91 – a psalm of protection from her King James Bible. In a curious ironic turn, she also flips through her husband Lem’s Twenty-Four Hours a Day, an Alcoholics Anonymous book that guided her late husband’s day-to-day life. She leaves bed for a stationary bike in the basement where she reads another chapter or two in the Bible.

After biking, she flips on CNN and hops on the elliptical. Sometimes she bounces on her trampoline. Back upstairs, she turns on a televangelist while she stretches. She says his message is about walking in love. That’s how she practised psychiatric nursing and social work. It’s how she moves through life now as a widow, a friend and an avid athlete. 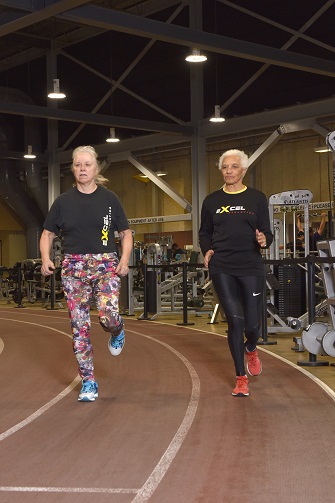 Coward and LaFayette-Boyd spend at least three days each week together, ten months of the year. Coward says the two are "joined at the hip." (Photo by Trevor Hopkin)

LaFayette-Boyd was able to move on and today, in her typical optimistic way, finds a cheery viewpoint.

LaFayette-Boyd loves her family – she revels in the company of her grandchildren and other relatives. She’s devoted much of her free time to genealogy. Beaming, she says she’s a descendant of James Armistead LaFayette, a slave famous for infiltrating British intelligence during the American Revolutionary War.

Her resolve has helped her through all aspects of her life, including athletics. When asked about being named 2018 World Masters Athletics Female Athlete of the Year, she pauses. A melancholic shadow passes over her thin face as she considers the question.

“I don’t know how to explain it,” she says softly. “I’m pleased, but it doesn't mean as much because my family … ,” she drifts off.

Her glasses reflect the warm lamp-glow as she uncrosses her arms and turns toward a photo of her daughter, son and husband. 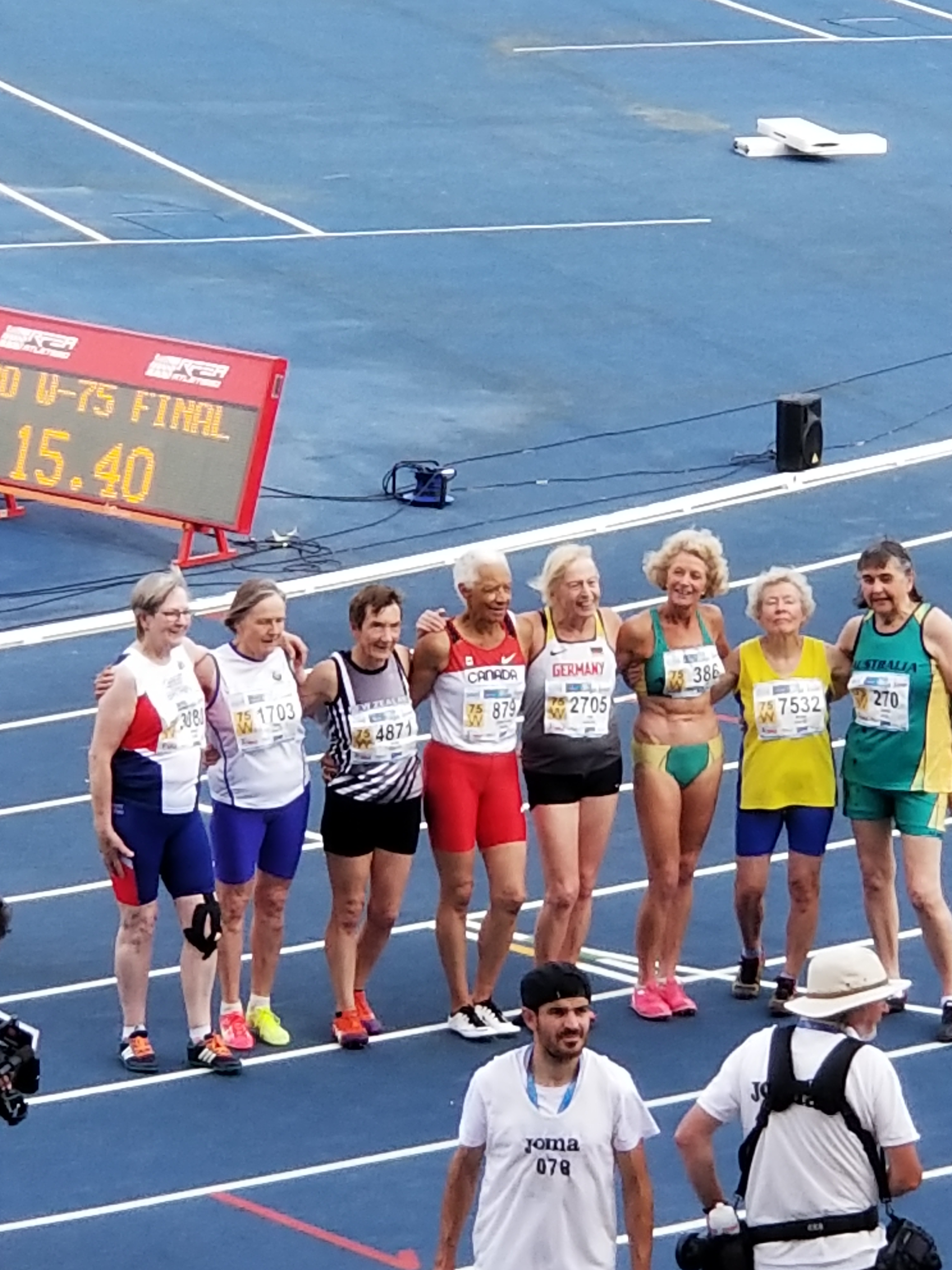 LaFayette-Boyd stands with her fellow competitors after she set a new record for her age in the 100 metres at the 2018 World Masters Athletics Championships in Malaga, Spain. (Photo courtesy of Carol LaFayette-Boyd)

She breaths deeply and the corners of her mouth rise.

“I’ve reached the top and now I can just relax.”

But for LaFayette-Boyd, relaxation doesn’t mean throwing in the towel.

Kendall P. Latimer is a curious and creative freelance writer, photographer and filmmaker. She has been storytelling with CBC Saskatchewan since 2016, after previously writing and photographing for Saskatoon StarPhoenix and Bangkok Post.

Nostalgic for the sky

Journalism school graduate Nehal El-Hadi reflects on her journey – from Sudan where she was born, to England where her family immigrated, to Moose Jaw where she learned to revere the open spaces and endless sky.

William F. Ready QC, BA, JD, LLD (Honorary '89) has most ably served as chancellor of the University of Regina since the fall of 2007. During that time, he has conferred more than 13,500 degrees, diplomas and certificates on U of R graduating students. Ready first distinguished himself during a nearly 50-year law career that saw him become a senior partner in McDougall Ready (now McDougall Gauley), one of the oldest law firms in Saskatchewan. He is also well known for his contributions to education. He served as a trustee for the Regina Board of Education for 11 years – two years as vice-chair and two years as chair. In recognition of his commitment to education in Regina, the W.F. Ready Elementary School opened its doors in 1984. This year’s spring convocation at the U of R is Ready’s last as chancellor.