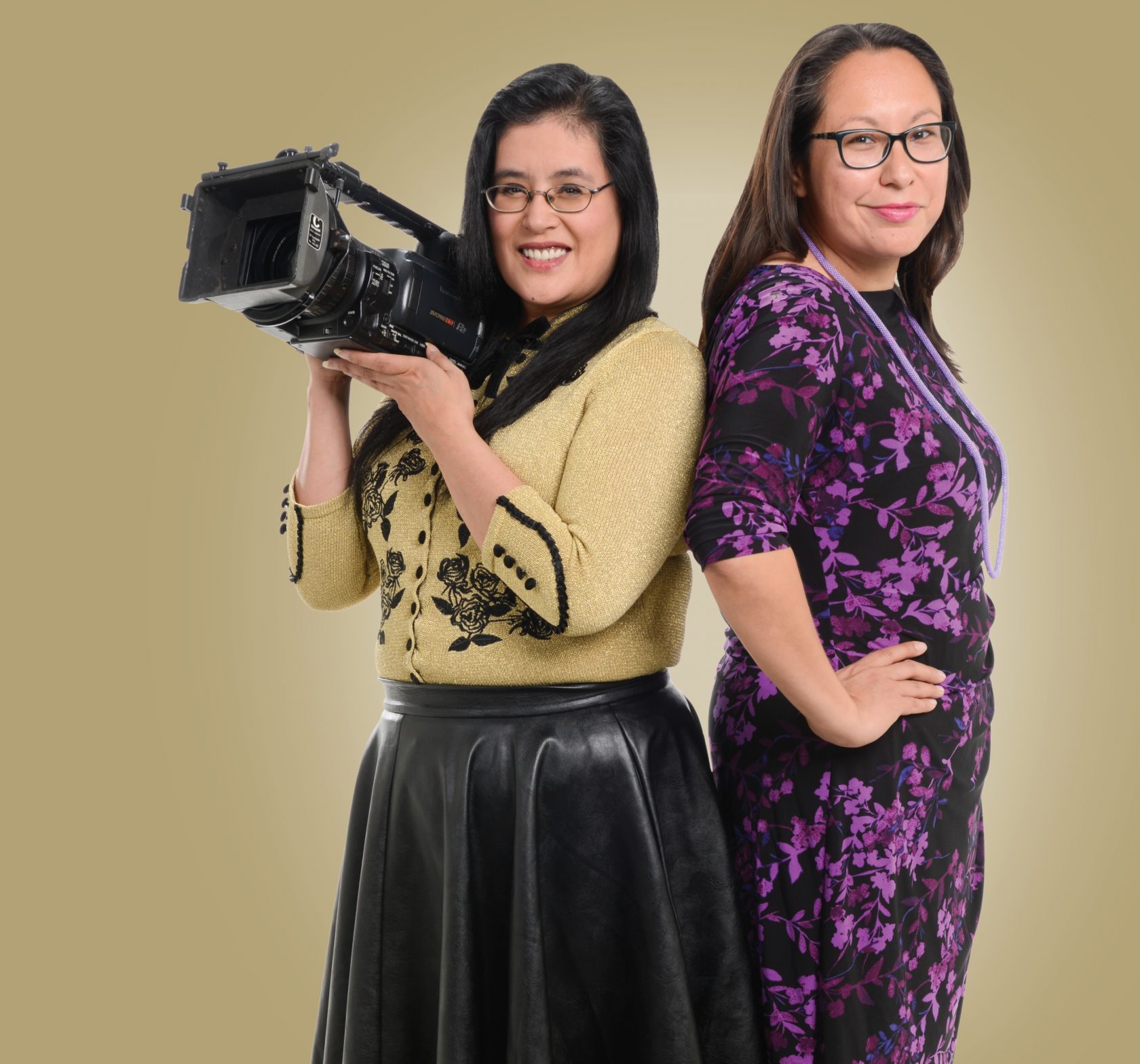 The filmmaking duo of Trudy Stewart and Janine Windolph have created—together and separately—award-winning documentaries featured at festivals and screenings around the world.

Trudy and Janine first met as students at the University of Regina. They were single mothers with young children. Trudy knew that storytelling through film and video was her calling, and since childhood, Janine’s dream was to work in film and video. They cemented their creative relationship while at working together at the Indigenous Filmmaking festival, mispon.

Committed to illuminating Indigenous issues and inspiring meaningful change, they were statement gatherers for the Truth and Reconciliation Commission of Canada (TRC), collecting stories from residential school survivors and others about the shared colonial legacy of the residential school system.

During their time as TRC statement gatherers, the team heard stories about a residential school—the Regina Indian Industrial School (RIIS)—that had operated just outside of Regina from 1891 to 1910. The school site in the city’s northwest corner also contains a cemetery that includes the unmarked graves of about 40 children who attended the school.

Trudy and Janine created the RIIS Media Project to raise awareness about the history of the school and cemetery, and to give voice to those in the community impacted by the school. With financial support from the United Church of Canada and affected First Nations communities, the pair co-directed and co-produced RIIS from Amnesia: Recovering the Lost Legacies, a documentary that explores the shared colonial legacy of the school and cemetery. They also helped establish the RIIS Commemorative Association, seeking heritage status for the site. Their most vocal advocate for heritage designation was a late residential school survivor and Elder at the University of Regina. The site received heritage status from the province in 2017 and from the City of Regina one year earlier. In June of this year, responding to TRC call to action #79, the one-acre grounds housing the cemetery were transferred from the federal government to the RRIS Commemorative Association.

The two ACAA award recipients agree that they could not have accomplished on their own what they have achieved together as independent filmmakers and storytellers. Looking back, they appreciate that the U of R provided a safe space and community where they could grow, minimizing barriers for Indigenous women balancing motherhood with education.

At the time of her passing Trudy was working a “dream job” as film programmer for imagineNATIVE, the largest film and media arts festival in the world. Janine is curator of Community Engagement for the MacKenzie Art Gallery.

Gary Drummond, Queen’s Counsel-turned-business-leader, has never been one to pursue recognition for his considerable achievements. Gary’s business pedigree, however, is just as impressive as his 18-year commercial and corporate legal career—making him a most deserving recipient of the ACAA Lifetime Achievement Award.

WP_Post Object ( [ID] => 3593 [post_author] => 7 [post_date] => 2019-12-04 15:25:12 [post_date_gmt] => 2019-12-04 21:25:12 [post_content] => Gary Drummond, Queen’s Counsel-turned-business-leader, has never been one to pursue recognition for his considerable achievements. Gary’s business pedigree, however, is just as impressive as his 18-year commercial and corporate legal career—making him a most deserving recipient of the ACAA Lifetime Achievement Award. Gary is a founding partner in Direct Energy, created in 1989 during electrical and natural gas deregulation. The timing was right and the business proved to be very successful. He was the President and CEO for Direct Energy Marketing Limited from 1991-2000 and was the lead partner in developing the ethanol plant at Belle Plaine. For the past 15 years, Gary has been a partner in real estate projects in Calgary and Toronto, and is involved in real estate and farming in Saskatchewan. He is a founding partner in the investment group that purchased the Phoenix Coyotes of the National Hockey League, serving as the team’s president for three years. Gary is also a founding partner of the CFL’s upcoming 10th franchise, the Atlantic Schooners. His interest in sports runs deep. Gary played with the Regina Pat Blues of the Saskatchewan Junior Hockey League and practiced with the Western Hockey League’s Regina Pats, but his dream of playing in the National Hockey League was not to be. Gary went on to earn a Bachelor of Arts in Economics from the University of Regina in 1971, then pursued a Law degree at the University of Saskatchewan, and credits his time at university with helping him learn the value of relationships. “I think focusing, prioritizing, and building long-term relationships all started for me in university, and that is reflected in the success I’ve had,” he shares. Gary’s commitment to education, sport, and people is awe inspiring. He and his wife Audrey host the impressive annual “Hawg-a-Rama” at the family farm where they—along with the help of the friendships they’ve nurtured over the years—have helped raise $1 million for University of Regina athletic teams and $1.5 million for Regina Minor Football. As a student, Gary says he did not put in as much quality time learning nor retain as much knowledge as he should have. “That said, the degrees gave me the foundation which led to the opportunities I’ve enjoyed. I think university is a fundamental building block to a creative, visionary, and successful career. It’s a much more difficult path without a post-secondary education.” The ACAA Lifetime Achievement Award recipient feels strongly that, “having a university in a community is integral to creating a well-rounded and progressive environment within which to work and raise a family.”